The Future of Food | The Walrus
Skip to content 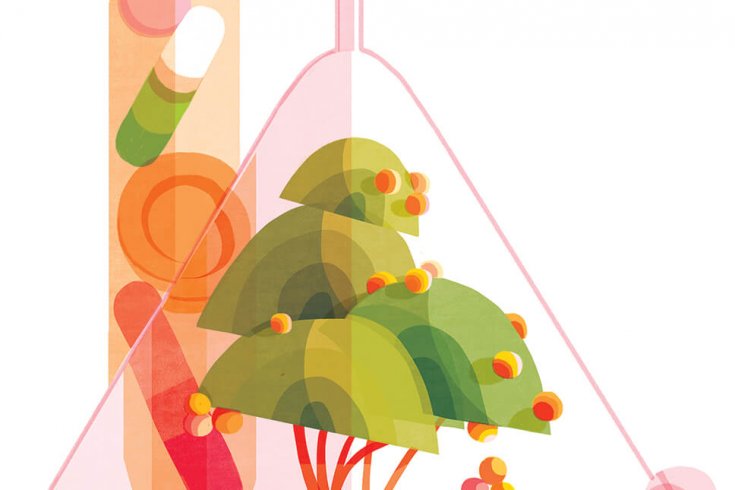 At the 2015 Expo in Milan, Ikea unveiled a prototype for its kitchen of the future. The future, for all its promise, looked grimly similar to the now. The space featured fall-apart saucepans and flimsy plastic utensils that dangled from a pegboard, and its colour scheme fell somewhere on the continuum between “Ashtray” and “Deathly Pallor.” There were, however, some properly futuristic touches. There was a “mindful” water system for reducing waste and a magnificently complicated recycling area. And, in place of a stove, there was a “Table for Living,” over which the home cooks of tomorrow will not only eat their three square but also research recipes (via the AI-equipped instructional projection system), weigh their fresh tomatoes (via its built-in scale), and sauté chicken thighs (courtesy of invisible induction burners)—all, one hopes, without setting the kids on fire.

What Ikea’s designers didn’t seem to have considered, though, was that the kitchens of the future won’t need scales or saucepans, much less whole ingredients, because at-home food preparation will be reserved for the very poor and the idle, if idiosyncratic, rich. Already, in 2018, “cooking at home” is as likely to mean assembling a processed meal or reheating a frozen dish as it does working with whole ingredients. According to one marketing-analysis company, Canadians now spend fewer than fifteen minutes preparing a typical meal, and researchers from Dalhousie University and the University of Guelph have said that, in fewer than twenty years, Canadians may be spending half of their food budgets on takeout and prepared foods. Follow that trend line another few decades, and it’s hard to imagine that anyone will remember how to hold a chef’s knife.

Our march to full fast-food nationhood won’t be all that bad, though. In recent years, the category has grown to include more than Big Macs and party-sized Grease Lover’s pizzas—it’s the organic salad station in your neighbourhood grocer, the made-to-order masala dosa in the food court, and the corner food truck’s slow-growth, free-range chicken with couscous and apricots. Given all of fast food’s possible permutations, it seems reasonable that our dining choices will soon be limitless. Craving a raw açaí bark and valerian-root sundae while on your couch at 2 a.m.? Watch for it at your drone port in exactly five minutes (no tipping required).

Yet while fast food will largely sever us from our kitchens in the short term, advances in food technology will deliver the final cut not long after. In the coming years, lab-grown stand-ins will likely replace many of our current grocery-store staples, and “cooking,” such as it is, will be reserved for the specialists. In Silicon Valley, one company has created passable cow’s milk and other “dairy” products without the need for an actual cow. Genetically modified yeasts are used to produce milk-specific proteins and chemicals to brew the substitute beverage. Another company, this one backed by Bill Gates, uses a similar yeast technology to manufacture a plant-based heme, which mimics the molecule that gives beef much of its meaty flavour. That lab-made heme has become the key ingredient in the business’s vegetarian Impossible Burger, which recently launched in the United States.

Given these breakthroughs, it isn’t hard to imagine that, with a few decades of progress, the production of whole foods—milk and meat, spices and flavourings, even fruits and vegetables—might soon become unnecessary and even irresponsible. Take the peach: to grow a single fruit, farmers in Georgia need to plant a tree on valuable land, irrigate it with near-priceless water, and treat it with noxious pesticides. Once the peach has been harvested, workers need to truck it halfway across the continent. All of this takes a lot of time and money—not to mention its ecological impact. Now what if I told you that a Massachusetts firm is brewing the same chemical compound that gives fresh summer peaches their taste, no trees necessary? Synthetic food might soon become the only reasonable choice.

This might all sound slightly dystopic. If it’s any consolation, there’s no reason that home cooking can’t live on as a strange and endearing affectation, sort of like sock darning or magazine reading. I, for one, plan to supplement my diet of fast-food salads and cryo-frozen faux-tuccini with bootleg home-baked cobblers and semi-annual black-market beefsteaks. My great-grandkids will probably cluck their tongues and call me a dinosaur. Which is fine, I suppose. It’s probably better that they don’t know what they’re missing.

Chris Nuttall-Smith (@cnutsmith) is a food writer and restaurant critic. He has written for Lucky Peach, Esquire, and the Globe and Mail.
Wenting Li