The Future of Nature | The Walrus
Skip to content 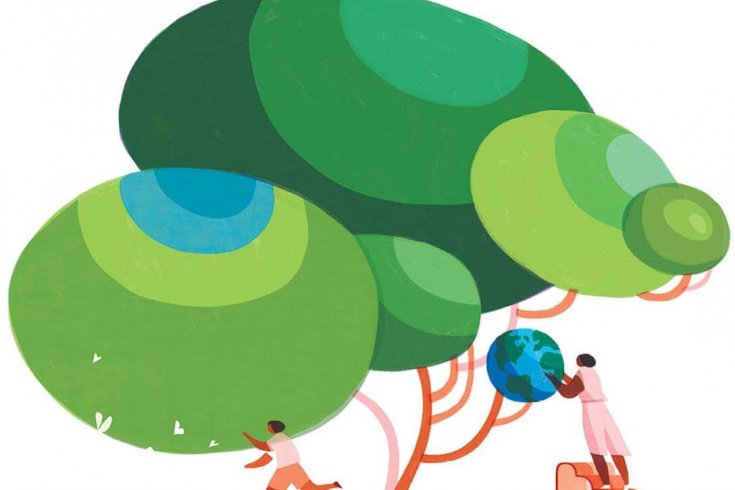 The future of nature is the future of everything. To understand where we’re headed, let’s recognize where we are. Scientists are calling this period the Anthropocene—a time when humans are altering the planet’s physical, chemical, and biological properties. Many of the results aren’t pretty. Over the past hundred years, while the human population has more than doubled and the global economy has increased approximately 2,000 percent, the earth’s biodiversity has decreased by more than half.

In Canada, we aren’t immune. Several herds of iconic boreal caribou face extirpation from established rangelands, and governments are unwilling to slow fossil-fuel and forestry development to protect the animal’s habitats. Climate change and pesticide use continue to hammer pollinator populations crucial to the global food supply. In the oceans, many fish and whale species continue to decline. In the Salish Sea, off British Columbia’s coast, near my home in Vancouver, only seventy-six southern resident orcas remain.

Globally, the situation is dire. We’re in the midst of an “insectageddon”—a dramatic disappearance of many insect populations. (In theory, if the bottom link of the food chain disappears, the whole chain collapses.) Oceans—which cover nearly three-quarters of the planet and are the source of all life—are rampant with dead zones and a “garbage patch” as big as Quebec. Canada has taken some strong steps toward sustainability. The 2018 federal budget promised a historic $1.3 billion to protect and restore nature, part of which has been earmarked for Indigenous peoples to conserve lands and species. Indigenous peoples need to be at the forefront of developing stronger habitat protections; they were responsible stewards of these lands and waters for thousands of years before settlers arrived.

But funding isn’t enough. Approximately 70 percent of our residents live in cities, where jobs—and thus the economy—become the highest priority. The result is that we no longer feel connected to nature, and we do not realize we are embedded within it. So we make decisions that cost nature dearly, under the misguided notion that they won’t harm our well-being.

We tend to see the environment and economy as opposing forces. They aren’t. This is being proven by the growth of clean, renewable energy and studies into the economic value of natural assets and ecosystem services. Economics and ecology come from the same root, oikos, meaning “household” or “domain.” Ecology is the study of the rules of sustainability, while economics is the management of our domain. Economics, therefore, should be applied under the laws of ecology. In other words, our economic choices should make sense within the natural world’s limits. Investing in nature is best for the environment and the economy. And yet we’re still fighting the reality that powerful industries can stall progressive environmental decision-making. The approvals of the Site C dam in BC and Kinder Morgan’s Trans Mountain pipeline project come at a time when Canada is already unlikely to meet its Paris climate accord commitments.

The transition to clean, renewable energy must be immediate. The sun and wind generate monumental energy, and increasingly affordable technologies now exist to help us harness it. To move these forward, we should enshrine the right to a healthy environment into Canadian law. More than 100 countries have done so. What is our federal government waiting for?

This spring, I turned eighty-two, which means I’ve been fighting for environmental causes for many decades. Although I’ve faced discouraging challenges and repetitive defeats, I cling to hope. It’s based on the knowledge that we don’t know enough to manage nature, but we also don’t know enough to say it’s too late. If we pull back and give nature a chance, maybe she will be resilient enough to surprise us. We’ve seen it happen. After discovering the dangers of DDT, governments began banning the chemical. Declining bald eagle and peregrine falcon populations—which were suffering thanks to the DDT thinning their egg shells—subsequently rebounded.

Four-year political decision-making cycles and prioritization of the economy have created this mess, but humans still have the opportunity to make better decisions for long-term rather than short-term gain. Nature’s future—our future—comes down to our decisions today, such as electing governments with policies that place the environment front and centre. This won’t happen automatically; it takes public groundswell to create political will. Mother Nature will take care of herself. I’m afraid the question is whether humans will be around to see her future.

David Suzuki (@DavidSuzukiFDN) is a scientist, author, and co-founder of the David Suzuki Foundation. He is the host of CBC's The Nature of Things.
Wenting Li