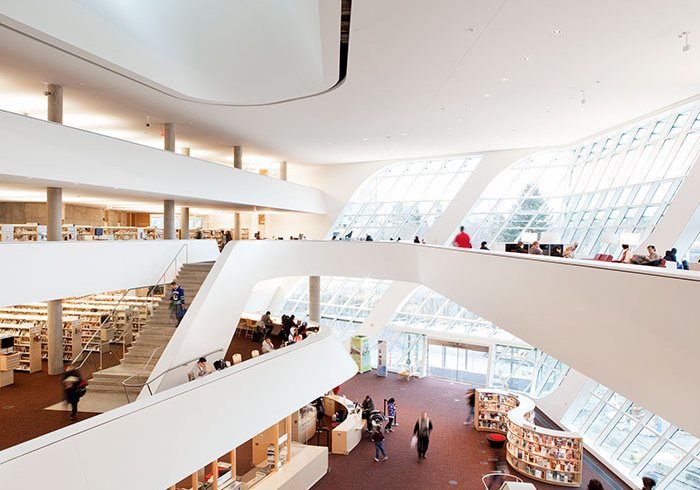 The newly completed City Centre Library in Surrey, BC.

Last fall, I travelled to Surrey, British Columbia, to attend a party in a strange new building that everyone kept calling a library. Surrey is engaged in a multibillion-dollar spree of city-making, and its ambitiously named City Centre Library represents the pinnacle of that effort. At the opening reception, I saw children bouncing gleefully on rubber boulders; I saw teens lounging in hammock chairs and pregnant women beached on benches; I saw folks with Cantonese, Tagalog, and Farsi accents ordering lattes at the built-in café; I saw toddlers studiously at play along rows of computers. What I did not see, at least not immediately, were books.

Scaling the vast helix of white that swirls around the library’s central atrium, I accosted a staffer who was preoccupied with asking children to please take off their shoes before jumping on the furniture. When I despaired at the measly number of books in the literature section, she explained, with diplomatic care, that I was missing the point. “Our jobs are becoming more about helping newcomers with their language skills, or helping people access government services,” she explained. “We’re kind of social workers, actually.” Her fuzzy job description reflects a new reality for libraries, which have become much more than staid warehouses of content managed by shushing greybeards.

Libraries like Surrey’s City Centre are right to do away with their stacks; the need for the books they have been collecting over the past few centuries has diminished. The culprit is all around us: that nebulous Cloud, the virtual place where movies, music, and books come from when you download them. It includes web-based email like Gmail and services like Google Docs or YouSendIt, and it replaces physical media with free-floating content. But as books go the way of clay tablets and papyrus scrolls, libraries are thriving.

In Myanmar, a library offers a window to the US 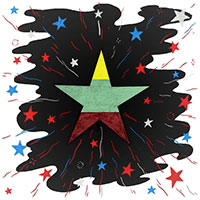 The Baldwin Library, located in Rangoon and run by the United States Embassy, is so popular among its 17,000 patrons that it limits borrowing to just two books at a time. Dozens attend the book club, held on the last Wednesday of every month, where recent reads included Raymond Carver’s What We Talk About When We Talk About Love, and The Glass Palace by Amitav Ghosh. They unwind at the weekly film club, where Freedom Riders was January’s highlight. The library is part of an American centre that allows the people of Myanmar to enter a US government–approved immersion program of sorts. They can attend esl classes, moving from the most basic vocabulary to advanced critical thinking in English. They can read the centre’s weekly newsletter, American News and Views (the week after President Obama’s 2012 State of the Union address, it published the full text of the speech). For those who excel academically, the Baldwin Library also provides a route to the US: the IT department reserves one computer solely for Burmese students applying to American universities.

The Canadian Urban Libraries Council, which monitors activity across Canada’s 2,000 libraries, finds that visitor rates are rising across the board. Toronto’s system, by far the country’s largest, sees increases every year, with 18.3 million personal visits in 2010, two million more than a decade ago. Calgary has earmarked $175 million to expand its central library, and similar projects are under way in Regina, Halifax, and Kitchener, Ontario.

Like the cathedrals of the Middle Ages, libraries constitute part of what the urban sociologist Ray Oldenburg called “the third place,” an anchor of community life that is neither a workplace nor a home. Imagine a Starbucks where you don’t have to buy anything, and you’re halfway there. Now imagine that Starbucks as the greatest building in your city, and you have the City Centre Library.

Designed by Bing Thom Architects, it spirals upward with Guggenheim-like expressions of white railings through over 77,000 square feet, toward a massive, ethereal skylight. The suburb of Surrey, once the butt of jokes but now enjoying a burgeoning urbanity of its own, asked Thom to give it a landmark. He knew that the quality of the space, rather than its holdings, would determine the centre’s utility, so he delivered a contemporary cathedral. When he and I met to discuss the library’s design, not once did he refer to books. His interest was always in the sociability his building might occasion.

“The idea of buildings that hold things is evolving,” says Jefferson Gilbert, executive director of CULC. Nowadays, libraries serve as a city’s living room. Although they have long had a public dimension—of studying in a designated place rather than in a messy dorm room, for example—this function depended upon an aura of books. As libraries’ contents began to dematerialize, however, their social possibilities migrated to the fore. And as former book readers spent more time at home, on the Internet, or working remotely, the repurposed library became even more important. To return to the cathedral: one could pray alone in the bathtub, but we choose to pray en masse because we’re still social animals, dammit. (By the way, I’m writing this from within a hive of six writers in downtown Vancouver.)

A few days before we spoke, Gilbert returned from touring a dozen innovative libraries in Denmark, Finland, Sweden, and the Netherlands. “In Europe,” he says, “they’ve begun calling them ‘cultural houses.’ ” The main branch of Amsterdam’s library has reduced its visible book collection by 70 percent. In Helsinki, staffers busily welcome new immigrants; Canada has a similar program in the works, launched last fall, which formalizes what many librarians were already doing. Outside Copenhagen, visitors hang out in libraries after regular hours, scanning their health cards to gain admittance, so that anyone who trashes the unstaffed facility will be caught on-camera and identified.

Future generations will look at our present libraries as intellectual Costcos, and our stacks as primitive, hard-copy versions of the Cloud. For now, at least, the shushing greybeards have themselves been shushed. On the same day I visited Bing Thom’s City Centre Library, I drove to Vancouver’s downtown Library Square. Moshe Safdie’s design, built in 1996, remains stubbornly classical. It has been compared to the Coliseum, a mass of arched concrete in the city’s core, its deep body filled with musty volumes. Workstations for scholars and slumbering transients rim the farthest perimeter, insinuating always that the holdings are the point. We humans are only tolerated.

Outside, though, a broad expanse of steps leads to a terraced plaza filled with people who fiddle on laptops and smart phones, working or playing or simply passing the time. They could just as easily be working in their living rooms, but, as if by nature, they have elected to do so in one another’s company.

Michael Harris is the author of Solitude and The End of Absence, which won the Governor General’s Literary Award. A faculty member in the Banff Centre’s literary-journalism program, he currently lives in Vancouver.
Grant Harder

Grant Harder is a portrait photographer. His work has appeared in the New York Times, The Atlantic, enRoute, and Monocle.