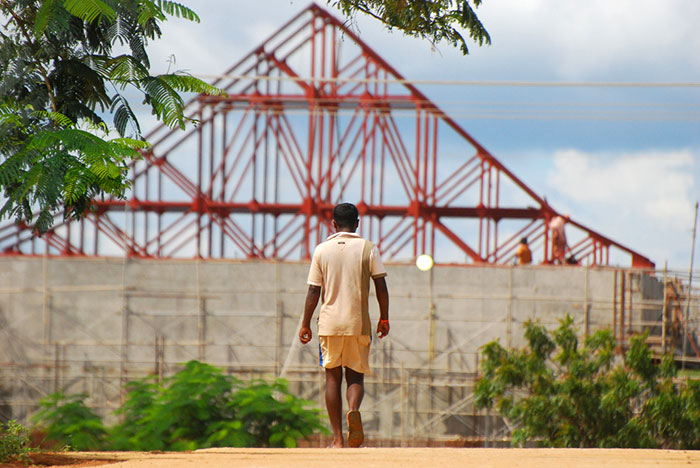 Thorny scrub lines a dusty red road leading into Hambantota District, one of the driest regions in Sri Lanka. But as the local bus turns toward Hambantota town, the district capital, the road widens and turns to smooth asphalt. Wind turbines whirl in the middle distance on one side, and the metal skeleton of a convention centre development looms starkly on the other. Billboards everywhere herald a new era for the region, and President Mahinda Rajapaksa, who hails from here, smiles down jovially from each one.

Sri Lanka needs a new era. Three decades of civil war between the government and the Liberation Tigers of Tamil Eelam, or Tamil Tigers, drained the country’s resources and claimed thousands of lives, mainly in the northern and eastern regions. The 2004 Indian Ocean tsunami killed over 30,000 Sri Lankans; and displaced an estimated 563,000, about 3 percent of the island’s total population. In the northeastern district of Mullaitivu, 80 percent were affected by the tsunami, only to see their region levelled again by the military campaign.

Comparatively, about 20 percent of Hambantota District’s half a million residents were affected by the tsunami—3,100 lost their lives and up to 4,000 their homes—and the region was relatively unaffected by the war. Nevertheless, it is seeing the bulk of development effort, and Rajapaksa aims to make it the country’s second-largest urban centre, after Colombo. Hambantota, which is 95 percent rural according to the 2001 census, is seeing the erection of a billion-dollar port; a new international airport to rival the island’s main hub, north of Colombo; and a cricket stadium, which hosted its first match, Sri Lanka vs. Canada, in 2010. But the port and the airport have been plagued by delays, and the army had to take over the stadium in 2011 because its administrators couldn’t afford to run it or pay the players.

Hiring a three-wheeler in Hambantota town, I head a few miles north to the village of Siribopura, built to accommodate those whose homes were destroyed by the tsunami. The neighbourhoods bear the names of their patrons: “Tzu Chi Great Love Village” says one sign from a Taiwanese NGO; “Lion Village: A Gift of Love from the People of Singapore” says another. The idyllic streets stand out like a mirage amid this arid landscape, and above the suburban tract houses a brand new government complex towers like a five-star resort. Beyond that lie empty plains. 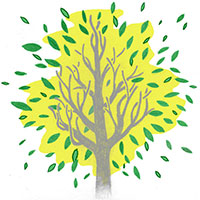 Erected in 1235 on the plains of present-day Mongolia, the city of Karakorum thrived for almost three decades as the first capital of the Mongol Empire. Trade and conquest lent the city an international flavour: its mud walls enclosed twelve Buddhist temples, two mosques, and a Christian church, and the local architecture reflected both Arabic and Chinese influences. Artisans captured from vanquished cities were highly prized, and their workshops filled Karakorum with ceramics, glass beads, bone carvings, and metalwork. One craftsman, Guillaume Boucher, created the centrepiece for the Great Palace of the Khan, “a great silver tree” featuring four lions “belching forth white milk of mares.” Still, the climate was arid and the location remote. Most food provisions were imported from China—winter frost, continuing well into May, impeded local crops—and at the city’s height a reported 500 cartfuls a day were needed to keep the inhabitants fed. In 1260, competing claims for the khanate from Genghis’s heirs culminated in a battle in the capital, which was first starved and then destroyed. The victor, Kublai Khan, moved it to a more temperate climate to the east. The Mongol Empire would never equal its former greatness.

In one government office, I meet with Mrs. W. P. K. Chandrawansa, Hambantota District’s deputy director of urban development. She greets me brightly and then leaves me in her office with a stack of feasibility studies for half an hour while she eats her breakfast. The office canteen has just opened, and a welcome ceremony is under way for employees in the new offices, half of which still stand empty. The studies are full of charts and statistics, but they don’t explain why Hambantota is expanding so rapidly while the rest of the country stands in dire need of development.

When Chandrawansa finally returns for tea, I ask her why this is so. She answers confidently that politicians have long ignored the south, so disaster relief funds directed to the region address a long-standing oversight. “Only the present government will draw attention and implement development after the tsunami,” she says. “We will be the new centre for business and tourism. People will come here from all over.” She appears coolly authoritative in her elegant sari. When she doesn’t know a specific figure, she picks up the phone, and after a minute one of her assistants comes in and whispers it in her ear.

But she doesn’t quite answer my question. The answer is Rajapaksa, not to mention his kin: his brother is the minister of economic development, and his twenty-six-year-old son, who represents the district in parliament, is the country’s youngest MP. In 2004, Rajapaksa senior, then prime minister, was investigated for misappropriation of funds when he had millions of rupees in tsunami relief transferred into a private account under the name Helping Hambantota. The charges against him were eventually dropped on a technicality, and he was elected president mainly due to his alliance with a socialist political faction in the south.

Although celebrated by many Sri Lankans for defeating the Tamil Tigers, he has been accused of war crimes, and several international organizations and heads of state have called for an independent inquiry into the final stages of the conflict. Sri Lanka’s recent government-led inquiry, which upholds the military’s account of events, has not convinced many, and Hambantota’s miraculous expansion is intended partly as a corrective to his dubious reputation abroad. Although the district lost a bid to host the Commonwealth Games in 2018, the year its population is projected to more than double, it will host the next Commonwealth Heads of Government Meeting, in 2013. Stephen Harper has said he will not attend unless due attention is given to alleged human rights violations in Sri Lanka.

Back in Colombo, I meet with a local social scientist who asks to remain anonymous. “You need to have development that is people centred, not the fantasies of a man who thinks he is king,” she says. “Why are they building an international airport so far from an urban centre? Why build so much in a region that is predominantly rural, without the labour profile or service sector to support it?” And if the government intends economic development to placate the ethnic tensions still simmering after the thirty-year war, then the focus on Hambantota counters any reconciliatory claims. “It reinforces the underdevelopment of the north and east, where investment is needed most,” she says, adding that if Hambantota’s overdevelopment continues at this pace it could bankrupt the country.

Meeting Sri Lankans, from Batticaloa in the east to Jaffna in the very north, I am often presented with a list of needs: schools, hospitals, clean water, bridges. Hambantota, by contrast, produces an array of superfluous success stories: sports complexes, hotels, and conference centres. Heading back out of town, toward the dusty road and the meagre dwellings beyond, I notice that the new street lights are styled on old-fashioned coach lamps. The Rajapaksas’ faces are emblazoned on every glass fixture.