Non-commercial Farmers are Facing Extinction | The Walrus
Skip to content 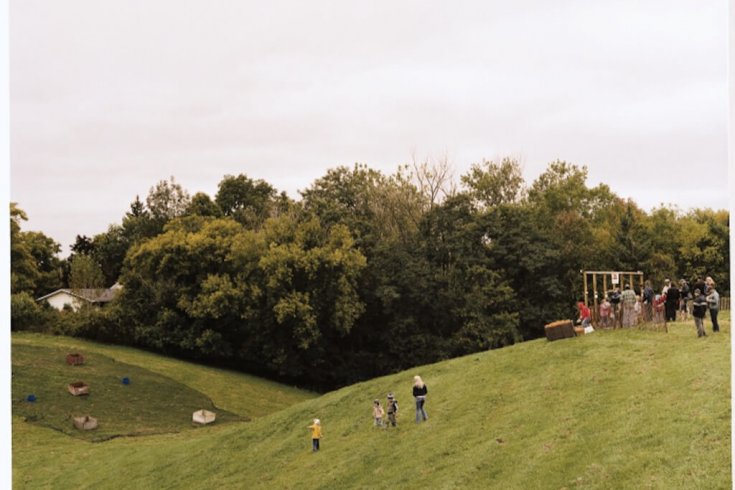 When Tom Chudleigh and his wife, Carol, opened their orchards to the public in 1967, there was only one other pick-your-own farm in Ontario. A dozen visitors was a busy Sunday. Now, 100,000 people a year pay $6 for the pleasure of plucking apples, frolicking in bales of hay, and taking tractor-wagon rides at the farm near Milton, Ontario. Across the province, farmers’ markets, including do-it-yourself harvesting, bring in $116 million annually. But it is difficult to say if this is a success story or the last gasp of a dying way of life.

Across the country, the non-commercial farmer is facing extinction. The costs associated with the mechanization of agriculture have gone up, and farmers are facing falling commodities prices because of global competition and the consolidation of grocery stores and other retailers. For those near cities, there are the added problems of urban sprawl and isolation from farm equipment manufacturers and wholesalers.

The 2001 census showed that the number of farms in Canada had dropped to 246,923 from 276,548 in 1996. During the same period, the number of “farm families” living on non-commercial farms dipped from 216,420 to 187,770, and average farm sizes jumped from 246 to 273 hectares. These numbers reflect the fact that many independent farmers have had to risk expanding their holdings, or have sold out entirely to agribusinesses (or suburban developers) who will pay millions for the land. Recent greenbelt legislation protecting farmland in the greater Toronto area is unlikely to stop this trend in Ontario. It will simply change which people farmers sell to and for how much. “Because the challenges are so great and there’s no incentive or assistance programs to make farming in the urban shadows viable, you’re not going to have farmers clamouring to buy a farm when it comes up for sale,” says Melissa Watkins, acting executive director of Ontario Farmland Trust. “It’s a real risk that it will just get bought up by rich people who will turn it into large rural estates.”

Then there are those who are turning sprawl to their advantage by catering to the city folk whose homes edge their properties. These enterprising growers are keeping their farms by selling the image of the family farm instead. Just as Chapters makes money off books by marketing (largely imagined) café culture, these growers make money off produce by marketing (largely imagined) rural traditions.

This shift from agriculture to agritourism is what Chudleigh calls “entertainment farming.” “We had lawyers and doctors and people of some income coming to pick,” he says. “That’s when Carol and I, about the second year, realized we were entertaining people as much as selling them food.” Chudleigh has 32,000 apple trees, and sells pies and related products. But he also brings in farm animals each fall to populate a petting zoo and hires eighty staff to keep the grounds up to the level of his customers’ pastoral fantasies. Despite his folksy manner, the sixty-five-year-old wears a BlackBerry on his belt and worries about demographics, merchandising, and liability insurance.

Jerry Howell’s pumpkin farm underwent a similar transformation. As selling pumpkins to supermarkets became less and less lucrative, the third-generation farmer began to lure customers to his Niagara-area property to buy direct, with attractions ranging from a twenty-five-foot animated pumpkin-eating dinosaur to corn mazes. “The type of farm that we run is more of a Cinderella-type farm,” he says.

Running a country theme park isn’t for everyone who sets out to work the land. A lot of farmers would rather be farmers than tourism operators, but many, including Howell, admit that this is simply no longer possible. Chudleigh estimates he earns three to four times more entertaining visitors than he would selling to wholesalers, and efforts like his are keeping small farms from disappearing.

In the United States, MaryJane Butters has built a veritable empire from direct farm marketing, complete with a magazine, a new book, markets, and classes on her land in northern Idaho. In an interview with Dana Goodyear for the New Yorker, Butters said, “People wanted to go to a farm, reconnect with that, see what a farm does, what a farm is . . . . The Upick thing was a hit, the music, being outside in a beautiful setting, the hay bales in the field. Totally like Disneyland reinvented.”

This sort of agritainment is the latest addition to a vernacular that includes everything from computainment to retailtainment. But with its new suffix come serious consequences for agriculture. While the Disneyfication of farm life is saving some family businesses, it obscures the larger crisis in small-scale farming. Suburbanites may use the experience to teach their children that corn doesn’t come from a can, but their adventures leave them ill-informed.

Ironically, the family farm may become of vital importance just as it sings its swan song. In 1956, geologist M. King Hubbert correctly anticipated that US oil production would peak in the early 1970s. In his recent book, Hubbert’s Peak, geologist Kenneth Deffeyes applied his colleague’s methods and emerged with an estimate for when world oil production would peak—November 24, 2005, US Thanksgiving. While this date is being debated by oil experts, dire forecasts like Deffeyes’ seem plausible in light of oil prices of $65 US per barrel or more. With rising oil prices comes a renewed focus on localized, organic farming.

As James Howard Kunstler, the author of The Long Emergency, has put it: “The age of the 3,000-mile Caesar salad is coming to an end.” Between January and July of this year Canada imported $12.2 billion of its fresh and processed food; an oil shortage would make shipping fruit and vegetables from California or Chile or China in the winter months prohibitively expensive. As the fuel that spawned suburbanization and competitive factory farming becomes scarce, we’ll look closer to home for sustenance.

This will mean not only a major shift in resources, but a shift in the way we think about everything from land use to labour. Instead of about 2.6 percent of the population engaged in farming, 16 percent of whom are right on the doorstep of suburbia, Kunstler envisages the revival of a native-born farm-labouring class in a distinctly rural setting.

He also imagines a return to small farms that feed ten people using traditional methods of agriculture in place of the agribusinesses, which currently feed about 125 on average. “The process of readjustment is apt to be disorderly and improvisational,” he writes. “Food production will necessarily be much more labour-intensive than it has been for decades.”

What natural resources will be available for all this is another question. Statscan reports that only 5 percent of the country’s soil is free from severe constraints to crop production. Moreover, by 2001 half of Canada’s urbanized land had been developed on dependable agricultural land. That land can’t be reverted for farming. As Gregory Greene, director of the documentary The End of Suburbia, says, “There’s no Plan B for agriculture. Once you’ve lost the soil, it doesn’t help to go organic.”

Meanwhile, Tom Chudleigh’s business continues to boom. On a typical Sunday in October, there are so many cars at the entrance that Chudleigh has to hire a traffic cop to direct visitors into the parking lot. Since he started charging admission in 1996, he has tried to be present to greet his guests as they make their way to his orchards. There, from row upon row of manicured trees, tourists pick a souvenir of farm life, a memento mori.