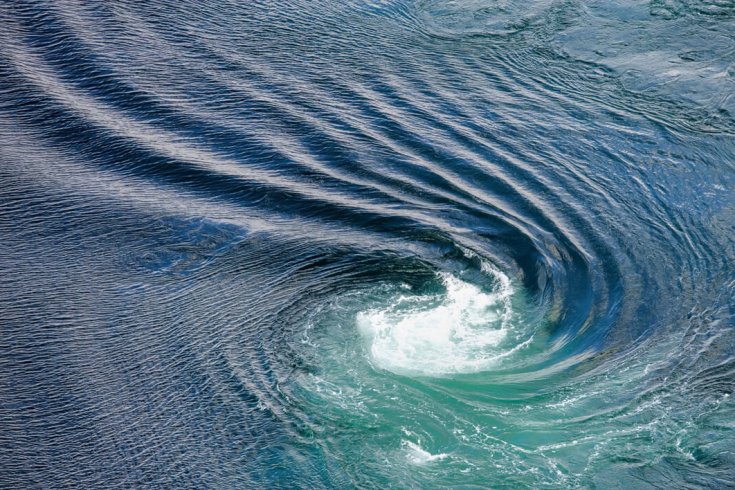 In December 2009, the propeller blades of the first modern turbine ever deployed on the sea floor of the Bay of Fundy were destroyed by five-metre-per-second tidal currents.

The tide through the narrow Minas Basin, where the turbine was located, can rise and fall sixteen vertical metres, making it the biggest in the world. Put another way, the amount of water flowing through the passage during a single flood tide is the equivalent to the total combined flow per hour of all the freshwater rivers in the world.

This surge of natural energy, caused in part by the gravitational attraction of ocean water to the moon, is more reliable and predictable than wind power. It makes the Bay of Fundy one of the greatest untapped sources of tidal energy on the planet. And Nova Scotia, a province still largely dependent on burning coal for electricity, currently has a government that is determined to see these tidal forces converted into electricity. If it can be tapped, tidal-energy experts say, the Minas Basin and Minas Channel in the Bay of Fundy alone could supply in the range of 2,000 megawatts without serious environmental harm—nearly enough to satisfy all of Nova Scotia’s power needs.

Submerging turbines in places like the Bay of Fundy—and smaller choice spots in British Columbia—is a project still in its early stages and remains a highly complex and expensive engineering challenge. But it’s now possible to see the day when harnessing tidal energy takes a place alongside solar and wind energy—in spite of the current technological growing pains and financial uncertainty afflicting the nascent tidal-energy industry in Canada.

At first glance, the idea of harnessing tides seems like a no-brainer. The energy is perpetual and so predictable you can set a clock to it. In a country with more than 240,000 kilometres of coastline and hundreds of remote communities, the potential seems boundless.

Humans have used tides to drive water wheels for more than 1,000 years. And in the Maritimes, attempts to exploit the awesome tides of the Bay of Fundy for electrical generation have been ongoing for more than a century. During that time, Nova Scotia saw the construction of the Annapolis tidal station, a tidal barrage project that is similar to a dam with turbines placed across a narrow water channel. Gates are typically opened to let a rising tide fill a bay or river, and when the tide recedes, all of that falling tidewater is forced through a turbine located at a narrow pinch point.

The Annapolis Tidal Station, built in 1984 in the Bay of Fundy, is both an engineering success story and a cautionary tale, says Graham Daborn, a retired biology professor who taught at Acadia University and who has spent more than forty years studying tidal energy. The station’s turbine has withstood caustic salt water and punishing tidal currents since the mid-1980s with minimal downtime, but the station has been linked to bank erosion and the killing of migratory fish including Atlantic salmon and shad, and there was a freak accident of a humpback whale being trapped for days. It also continues to generate up to twenty megawatts of electricity, but Daborn says widespread concern over the environmental impacts mean it’s unlikely such barrage-style dams will be built again in Nova Scotia.

Instead, he says, the future will include more in-stream tidal energy (in tandem with other sources, like wave and offshore-wind energy), a fledgling industry where massive turbines are submerged or float across the bay. Fitted with spinning propellers similar to the ones on wind towers and connected to a generator, these turbines convert mechanical to electrical power. Such systems are thought to eliminate many of the problems associated with barrage projects—they have a smaller impact on land and tides, and fish and mammals have alternative pathways to move past the in-stream propellers, which typically rotate more slowly.

Nova Scotia has become one of the global leaders in this industry—just behind the UK and France—for several reasons. The province is home to one of the two biggest test facilities for commercial-scale turbines in the world, where pioneering work in environmental testing and the development of underwater monitoring technologies is ongoing. Then there is the resource: the Bay of Fundy, one of the best tidal-energy sites on the planet, is in close proximity to large populations; Nova Scotia is intent on attracting and growing a cluster of tidal-energy companies to stoke job creation, and most urgently, the province’s dependence on coal adds pressure to convert to renewables.

Until 2010, 88 percent of Nova Scotia’s electricity came from nonrenewables, including coal, but to help meet its 2020 target of 40 percent of energy coming from renewables, it hosts seventy-nine wind turbines (and has expanded hydro). But onshore wind can only take them so far—there are a finite number of high-quality wind sites that can be developed.

Even though tidal energy is much more expensive per unit of electricity than other alternative sources (wind on land costs less than ten cents per kilowatt hour, fixed offshore wind costs in the twenty to thirty cents range, and it’s estimated that in-stream tidal can cost as much as sixty-six cents per kilowatt hour) the province is willing to buy tidal energy at a guaranteed rate from developers. Based out of the Fundy Ocean Research Center for Energy, five developers have been awarded “feed-in-tariff” approvals—which means that the province has agreed to buy a total of twenty-two megawatts of their collective tidal electricity. The most advanced of these developers is Cape Sharp Tidal, which deployed a two-megawatt turbine in the Bay of Fundy in November 2016, becoming the first in-stream turbine ever to generate power for Nova Scotia’s energy grid. It lasted less than a year and was removed due to problems with the turbine electronics. Like all early stage technology, there is a necessary element of trial and error as the turbines are incrementally improved over time.

Cape Sharp deployed its latest turbine in Minas Basin in late July and connected it to the Nova Scotia grid on July 24. But two days later, OpenHydro Group, which partners in Cape Sharp Tidal with Nova Scotia’s Emera, announced it was insolvent, with its parent company deciding it would no longer invest in tidal energy. In August, Emera announced that it, too, would be unable to carry on with the project, which leaves a turbine sitting on the bottom of the Bay of Fundy and Nova Scotia regulators scratching their heads, waiting on a contingency plan. A spokesperson for Nova Scotia’s Department of Energy and Mines noted that the current state of limbo for this turbine “cannot be allowed to continue indefinitely,” the department wrote in a statement. “We have the ability to issue orders, revoke licenses and issue fines.”

There have been challenges with tidal projects on Canada’s West Coast as well. Last summer, Vancouver-based Mavi Innovations faced significant technical challenges as it deployed a turbine in Blind Channel, between northern Vancouver Island and the BC mainland, intended to offset diesel-power generation at a remote wilderness lodge.

All the components had to meet the capacity of a crane-mounted ship, as divers conducted their underwater work within just a one-hour window between tides. “The hard part is we’re so early in this still,” says Voytek Klaptocz, managing director of Mavi Innovations, about tidal technology. “But, right now, every project is like a new challenge.” He sees the future of in-stream tidal energy in British Columbia as a niche industry. Because most of the province already enjoys relatively cheap and clean hydro energy, the opportunity for tidal will be found in BC’s many small, diesel-power-dependent First Nations communities or in off-grid settlements. “Remote communities are our target because they’re already paying the highest prices, and we will be offsetting diesel.”

Today, electricity generated by tides powers approximately 4,500 homes in Nova Scotia, courtesy of the Annapolis Tidal Station—which has been widely discredited as too environmentally destructive to ever be built again. And despite estimates of global marine power potential of approximately 120 gigawatts annually for tidal technologies alone, just 0.5 gigawatts of commercial ocean-energy-generation capacity was in operation in 2016 around the world.

Even in the location with the most potential in Canada, not everyone is so upbeat about turbines. In the Bay of Fundy, beginning in 2016, in advance of Cape Sharp’s installation in Minas Basin, a group of fishermen from the Bay of Fundy turned to the courts to overturn government approval of the deployment. The fishermen claimed that the company had failed to capture an adequate baseline snapshot of the environment in advance of putting in a turbine, which was roughly sixteen metres in diameter and weighed 1,000 tonnes. (Without a clear snapshot of the ecosystem before a turbine is installed, it is impossible to know the real environmental impacts after a turbine is installed.) In April 2017, the court dismissed the fishermen’s request for a judicial review.

There are more than seventy species of fish known to pass through the Minas Basin or to live there continuously, including herring, shad, flounder, and striped bass. Atlantic sturgeon, endangered Atlantic salmon, and the occasional great white shark are also known in these waters. Prior to its collapse, Cape Sharp Tidal planned to environmentally monitor its new turbine for impacts to fish and other marine life, but it is unclear in the longer term who will be watching.

In spite of this setback, Nova Scotia remains committed to cutting coal and supplanting it with cleaner energies, including tidal. The province needs more renewables, says Daborn, who predicts that, alongside offshore-wind and hydro power, in-stream tidal has a place in Nova Scotia’s future.