Masters of the Universe | The Walrus
Skip to content
Who will call the shots at the world’s leading institute for physics?

Physicist Rüdiger Voss occupies a utilitarian office on route Marie Curie at CERN, or Conseil Européen pour la Recherche Nucléaire, the centre for fundamental physics, just outside Geneva. Amid the usual office paraphernalia, it is hard to miss the empty can of Atlas beer, a gift from a colleague. The beverage shares its name with ATLAS, one of CERN’s particle detectors, which just over a year ago helped scientists find the elusive Higgs boson. The discovery made front page news around the world, as the media attempted to explain what, precisely, the so-called God particle is and why it matters. In simple terms, the Higgs helps us understand how elemental particles get their mass, defining, as one Canadian physicist put it, the very structure of our reality. When the world seems more divided than ever by politics and religion, CERN is in a unique position to transcend national boundaries by exploring the most universal of questions.

The centre was founded after World War II to bring together countries in the pursuit of scientific knowledge and re-establish Europe’s scientific reputation. Today the 200-hectare campus, sprawled across Switzerland and France, provides roughly 10,000 physicists from more than 100 countries with state-of-the-art machinery such as ATLAS, and the Large Hadron Collider, a powerful particle accelerator. It also affords them the rare opportunity to collaborate with the best minds in their field, far from the distractions of everyday life. On the day I arrive, I watch scientists in cross-trainers sprint between meetings to which I am not granted access. Late one Friday evening, I pass a workshop filled with researchers busily pasting together bits of aluminum foil, or at least that is what it looks like. On the lawn outside Voss’s office building stands a large bronze statue of Shiva Nataraja, the Hindu god who destroyed an old universe so a new one could be created; it was a gift from the Indian government. 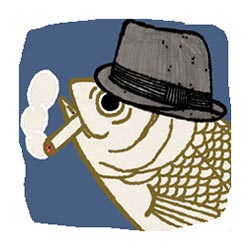 The Swedish navy recorded eerie “clicks” in the Baltic Sea in the ’80s and ’90s, classifying them as emanations from hostile Russian submarines. Tensions bubbled up in 1994 when Swedish prime minister Carl Bildt sent an angry letter to Russian president Boris Yeltsin demanding an explanation. Before the sabre rattling could officially commence, the Swedish government assigned a group of scientists to investigate. Bioacoustics expert Magnus Wahlberg listened to the recordings, and after performing some experiments and collation he uncovered the true culprit: herring farts. By squeezing the fish underwater, he could reproduce the sound heard on the recordings. Scientists posited that herring gas might be a form of communication, and the fear of Russian subs vanished—like a fart in the waves.

“Our director general likes to say that the E in CERN once stood for ‘Europe,’” says Voss, in a German accent softened by close to forty years in Switzerland, “but that now it stands for ‘everywhere.’” It has to. Creating a new universe doesn’t come cheap. The LHC plus accessories alone cost $6.5 billion, making it one of the most expensive scientific machines in the world. Well over six feet tall, with a crown of silver hair and round spectacles, Voss gave up his own search for the Higgs a few years ago when he joined the international relations department at CERN. “I was supposed to spend 50 percent of my time on research, 50 percent on development, and 50 percent on other things,” he says. “Now I spend all of my time on development.”

Last year, he visited Australia and Japan, made two official trips to China (that he can recall), and travelled four times to India, which he is wooing as an associate member. The designation is part of CERN’s patronage system. While one-third of user scientists are from non-member states, which collaborate on specific projects at the facility but don’t contribute to overall operating costs, associate members pay for the privilege of participating in meetings of the CERN Council, while full membership confers voting rights. In essence, more financial support means greater influence over the direction of research.

The council is now focused on building bigger, faster accelerators that might provide direct evidence of nature’s fundamental space-time symmetry (supersymmetry) and of the invisible dark matter thought by some to constitute more than 80 percent of the universe. In the meantime, Voss says his role is to “follow the feet” of users, a light touch on the process of selling ministers of science and technology on what one physicist I spoke to called “a seat at the international scientific table.” This is a unique opportunity for many traditionally marginal nations, such as Romania and Serbia. Israel became CERN’s first associate member from a non-EU country in 2011, and momentum continues to build.

In Calcutta, CERN director general Rolf-Dieter Heuer was treated like a rock star after the Higgs announcement, and Voss has heard whispers that Indian prime minister Manmohan Singh plans to double investments in basic science. Now that India’s application to CERN is almost in order, there is talk of Russia becoming an associate member. Unfortunately, less progress has been made on this side of the Atlantic. There are 168 Canadians at CERN, most working on ATLAS, who chip in roughly $6 million in Natural Sciences and Engineering Research Council funding each year (the Canadian government also contributed about $40 million up front to its construction). However, associate membership is not on the horizon. “In Canada,” Voss wrote in a carefully worded email, “it’s been difficult to identify a government partner who will take a real interest.”

A few hours after we meet in his office, he will board a red-eye to Calcutta to catch up with his Indian contacts. I find my way back down to the lobby, where flat screens broadcast real-time results from the particle detectors, including those associated with the LHC, which is scheduled for significant upgrades; when it reopens in 2015, it will operate at twice the power. At a nearby canteen, scientists who each hope their work will advance the Higgs findings queue for coffee. The joke goes that they are so competitive they don’t even exchange chit-chat—an obvious fallacy. “CERN,” Voss told me in his understated way, “is a mini-democracy.”

The Walrus thanks the Writers’ Trust of Canada for its financial support of this story.

Craille Maguire Gillies is a freelance journalist and a former editor at enRoute.