How Science Can Help Us Disagree | The Walrus
Skip to content 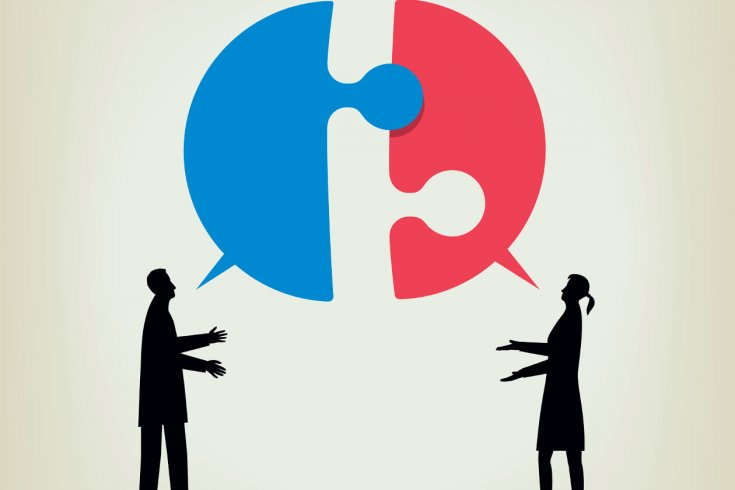 Kate Jollimore, thirty-two, is a little flustered as she makes her way through the Winners checkout line in Halifax, Nova Scotia. We’re talking about politics—specifically, the political debates that happen online, especially ahead of today’s Conservative party leadership debate.

“I definitely have right-leaning friends that will post things about Trump or about the Conservative Party here in Canada that will incite a reaction,” she says. “One of my friends in particular recently posted things related to the refugee crisis. We both agree there might be a better way to handle it, but it’s difficult to have a productive discussion online. It gets frustrating and I’m at a point now where I just avoid it. It’s too stressful.”

A few provinces over, in Ottawa, Ontario, Karina Rolland—a fifty-year-old who describes herself as a “bit right of center”—recounts how a recent discussion about immigration became particularly heated over Facebook.

“I remember when the Paris attack happened in 2015,” she says. “There was a lot of discussion on Facebook and Twitter and I simply commented that we need to increase the vetting procedure for immigrants. And oh my—the response! It was like I incited the troll universe.”

Many Canadians on both sides of the political divide have given up on the possibility of having productive discussions about policy—especially online. But there are two new projects—one out of Duke University in North Carolina, and the other out of the Massachusetts Institute of Technology (MIT) in Boston—that hope to change that. At the centre of both initiatives is a trait called “intellectual humility.”

Though the source of intellectual humility as an idea is debatable, businessman and philanthropist John Templeton may have been the first to describe it in his book The Humble Approach, self-published in 1981. It was focused on how humility could help one cultivate an open-mindedness in spirituality, and was re-published in 1998 as The Humble Approach: Scientists Discover God. But it wasn’t until 2003 that “intellectual humility” was first coined, in a book chapter entitled “Humility and epistemic goods” by philosophers Roberts C. Roberts and W. Jay Wood, who referred to it as a trait that facilitated one’s search for knowledge.

For many psychologists, who have since taken and adapted the idea, intellectual humility is a subset of general humility, and refers more to both one’s awareness of the limits of their understanding, and an openness to the ideas of others.

Mark Leary, a professor of neuroscience and psychology and director of the Interdisciplinary Behavioural Research Center at Duke University in North Carolina, has a “longstanding preoccupation” with why some people are more open to opposing viewpoints. Over the last several years, he’s looked at why individuals have varying experiences with interpersonal rejection, and partisan links around the idea that one’s views are superior. Now he is building upon his previous work on superiority and egotism using a grant from the Templeton Foundation, which supports research around humility. Studying the link between partisan views, emotional reactions, and intellectual humility seemed like a natural next step.

Last month, Leary and his colleagues published the results of their study in Personality and Social Psychology Bulletin, which introduced a new scale to measure intellectual humility. The scale consists of six items that highly correlate with the trait. Participants ranked themselves according to the degree to which they agree with statements like “I reconsider my opinions when presented with new evidence” or “I recognize the value in opinions that are different from my own.” Leary’s team conducted four experiments, each with over two hundred individuals. The first experiment was aimed at validating their scale. The remainder were focused on how participants react to opposing viewpoints, respond to those who change their minds on issues, and how individuals decipher between robust and weak arguments made by another person.

They found that liberals and conservatives did not vary significantly in their level of intellectual humility. That is, both may be equally open-minded—or not.

Leary’s study also found that intellectual humility can be learned. “It really all starts with a question,” he says. “‘Wouldn’t it be surprising if I was really always right, and everyone who disagrees with me is always wrong?’ It follows then that most people recognize they should be wrong at least some percentage of the time. That’s where the shift begins.”

A few states over in Massachusetts, Mark Klein, a research scientist at the MIT Centre for Collective Intelligence, has been studying how computer-assisted technology can foster intellectual humility. Skyping from Japan, Klein is soft-spoken and, with his balding head, resembles a Zen monk. He’s also wearing a T-shirt with an illustration of five dogs that reads “Dogs for peace.” It’s safe to say that he has personally mastered the art of humility.

He recently received a $250,000 US grant from the Templeton Foundation, the same funder behind Leary’s work, to further develop his “Deliberatorium.” The Deliberatorium is a computer program whereby opposing views about a topic—typically a controversial policy—are collated and presented in a flow-chart of logical arguments. Participants can enter their own carefully thought-out view into the program, and at the same time see the ideas of others who agree and disagree with them. The program vets each entry to prevent trolling or personal attacks.

Klein created the Deliberatorium to foster meaningful dialogue built on argumentation theory: that is, the line of logical reasoning used to come to a specific conclusion. His goal is to have people interact with others who have opposing beliefs by framing questions and enumerating various answers for those questions visually (as opposed to just in our heads). This results in a tree of arguments for and against various views. In the Deliberatorium, each logical point appears only once on the map—even if a million people have the same idea. That way, participants can critique and refine each point in an open market divorced from other biases—such as the number of people who hold a particular view—before deciding whether to change their mind.

“A lot of the personal attacks we see online, or even in person during political debates, are fueled by intellectual arrogance. People get stuck in their echochambers where they feel that only their views are correct, and they get disconnected from reason or evidence. The Deliberatorium allows for a testing of these ideas in a ‘marketplace’ of other ideas,” Klein says.

Klein first tested the Deliberatorium in 2007 as a way to improve discussions about biofuels in Italy—a controversial topic at the time due to the potential impact on industry, jobs, trade, and environment.

“People began to collaborate to develop a smaller number of deeper ideas and deeper arguments as opposed to just supporting their own idea,” Klein says, “It ended up being more based on reason and facts instead of just opinion and social dynamics.” The technology has since been used by Intel, the Federal Bureau of Land Management in the US, and the Italian Democratic Party.

With his new funding, Klein hopes to directly compare the discussions that happen through the Deliberatorium with those that happen on social media. “My goal is to help individual share grounded opinions . . . to create an aggregate picture of an issue that is more complete than what you might have gotten just from going to your friends on Facebook,” Klein says.

While he believes intellectual humility can be learned, he concedes that the Deliberatorium can’t perform miracles for the most strong-willed among us. “I think [the Deliberatorium] makes it easier for people to encounter other perspectives, but only those most interested in changing will change,” Klein says.

In Canada, the idea is also catching on. Diana Brecher, a clinical psychologist at Ryerson University in Toronto, hopes to teach her students intellectual humility through her new program “ThriveRU,” which helps university students strengthen positive personality traits.

“I believe that intellectual humility is a necessary condition for productive teamwork and leadership in general. It paves the way for an open-minded perspective on new solutions and new approaches to complex problems,” Brecher says. “If you have the perspective that you may not have all the answers but someone on your team might, it puts the goals of the group as a top priority.”

As the conversation turns to the Conservative leadership debate—and a race in which the leading candidate, Kevin O’Leary, has often been described as a bully—Brecher stops short of suggesting whether certain politicians in the US or Canada may be more humble. However, she does concede that intellectual humility is a strength that can be mistakenly viewed as a weakness.

“Take Trudeau, for instance. Like Obama, he seems open to compromise and negotiation, which characterize intellectual humility. But both of these leaders have been criticized for being weak for these very same traits,” she says. “We’re reaching a point now where as citizens, we are beginning to question this idea of leaders having to be aggressive . . . intellectual humility in our leaders can ultimately make all of us better off.”

Kate Jollimore and Karina Rolland seem to agree—not only that the trait may be valuable in our leaders, but also on how it could be harnessed through education and new technology, and perhaps even used to foster more fruitful political discussions on social media and beyond.

“That would be amazing,” Jollimore says, making her way out of the Winners parking lot noticeably more relaxed. “I mean I love a good debate, so this would make me more comfortable with sharing my views online again. And who knows?” she says. “If something is presented in a productive way, maybe I’ll even change my mind.”

Amitha Kalaichandran is a resident physician in pediatrics, an epidemiologist, and a health and science journalist whose work has been featured in Maclean's, National Post, CBC, Quartz, and New Scientist.