Can Science Bring Extinct Animals Back to Life? | The Walrus
Skip to content 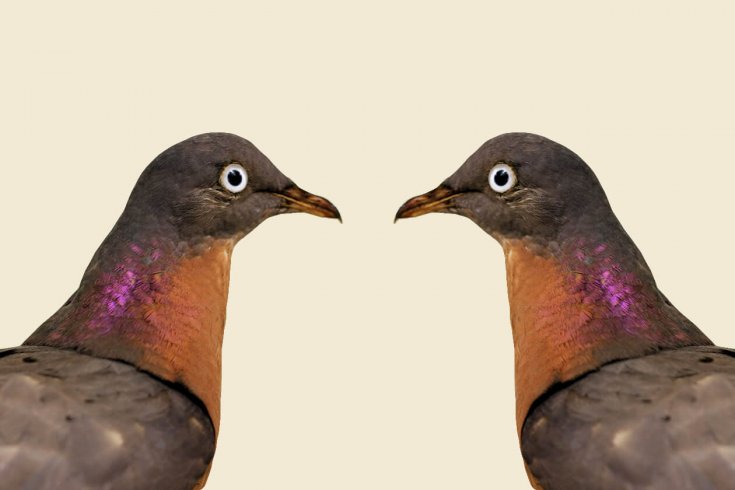 When settlers arrived in North America, the most abundant bird species on the continent was the passenger pigeon. The grayish bird with an iridescent bronze neck was about a foot-and-a-half long and resembled, according to historian and elegist Joel Greenberg, “a mourning dove on steroids.” There were likely between 3 and 5 billion of them on the continent, and the largest flocks congregated primarily east of the Rocky Mountains. Witnessing a passenger-pigeon migration over the Ohio River in 1813, naturalist John James Audubon marveled that “the light of noonday was obscured as by an eclipse” for three days straight.

Passenger pigeons often behaved as an agricultural pest: their vast nesting colonies bent trees out of shape, and they often blanketed the forest floor with a thick layer of excrement—enough to decimate the understorey. The birds were also seen as valuable for their meat and feathers. As a result, they were shot and trapped en masse.

Overhunting, combined with catastrophic habitat loss due to forest fragmentation, turned the passenger pigeon into a cautionary tale for conservationists. The population plummeted from billions to zero within a century. On September 1, 1914, a passenger pigeon named Martha, who was bred in captivity, died in the Cincinnati Zoo. She was the last known living passenger pigeon, and she was dutifully transported to the Smithsonian National Museum of Natural History in an enormous block of ice. She remains there on display to this day.

One hundred years after the demise of the passenger pigeon, California-based non-profit Revive & Restore is attempting to bring the species back to life. Dedicated to genetic rescue of endangered and extinct species, the team there is intent on harnessing emergent biotechnologies to genetically engineer and reintroduce endangered or extinct species, including the woolly mammoth, the black-footed ferret, and the heath hen. The organization is pursuing de-extinction with the larger conservation goal of restoring ecosystems to their former balance in order to help them adapt to current climate challenges. But not everyone in the scientific community thinks their strategy will work or that de-extinction is possible. Even if it is and a bird with similar DNA to the passenger pigeon manages to be brought into being, a new question would then emerge: Is this modified bird, born without a greater social structure, really a passenger pigeon at all?

“I’m the world’s first full-time employee employed for the specific task of thinking about de-extinction,” Ben Novak, the lead scientist of Revive & Restore’s Great Passenger Pigeon Comeback Project, tells me over Skype. I reached him in Geelong, Australia, where he’s pursuing a PhD at Monash University, and it seems fitting that when we speak, he’s thirteen hours into the future.

Novak has been thinking about the passenger pigeon virtually non-stop since the project began in 2012, but the thirty-one-year-old North Dakota native first fell under the spell of the species back when he was thirteen. That’s when he learned about the species’s history, including a story about how a flight over Toronto in 1860 included birds numbering in the billions that blocked out the sun for fourteen hours. “The grandiose nature of how big the flocks were and how quickly they could become extirpated really captivated me,” he says. “The thirteen-year-old me set out the goal that I was going to do de-extinction someday.”

If the project sounds reminiscent of Jurassic Park, that’s because it is. But there’s more at stake here than a sci-fi story—Novak sees the passenger pigeon as an essential species for the future of conserving eastern North American woodland biodiversity. “De-extinction is not something separate from a category that we call genetic rescue,” he explains. “If your goal is to conserve an entire ecosystem and there’s an extinct species that’s a key puzzle piece to that, you’ll always be fighting an uphill battle until that puzzle piece is back in the picture.”

Novak speaks with great assurance about the unparalleled job the passenger pigeon would accomplish as a natural management tool to create requisite disturbances to maintain biodiversity in the forests of the northeastern United States. Ironically, while their large numbers and densities once made passenger pigeons agricultural pests, their massive scale actually benefited forests, as it brought about forced arboreal regeneration and ensured a healthy and diverse landscape.

According to Novak, governments are currently investing in controlled burns in forests to create forced regeneration because these fires aren’t happening naturally. Even so, he warns, our familiar ecosystem is currently undergoing drastic changes, and controlled burns can’t keep up with the required disturbances for a healthy ecosystem. Oak trees in the northeastern US, for example, are being replaced by maple, and Novak says that forest scientists are predicting that dozens of species will go extinct at a local level in the not-so-distant future because of this erasure of the historically dominant trees. Bringing back the passenger pigeon, he argues, could provide the disturbances that the oak trees require to complete their life cycles and could ensure that forests remain biodiverse—turning around the current trend toward a more homogenous arboreal landscape.

The goal of restoring the passenger pigeon now has a tangible timeline, including a projected start date to create the birds in 2025 and a wild release scheduled for about 2040. Tthe passenger pigeon’s rebirth will involve combining its DNA—most of it taken from specimens in the Royal Ontario Museum’s passenger-pigeon exhibition—with its closest genetic relative, the band-tailed pigeon. Novak’s current research in Australia includes a project to test the feasibility of genetically editing domestic rock pigeon embryos. This is an essential pretest before work begins on band-tailed pigeon germ cells, which will be implanted into an embryo. Over time, the DNA of embryos will be modified to closely resemble that of a passenger pigeon. Novak then plans to breed a new generation of passenger pigeons in captivity and slowly reintroduce them into the wild.

However, some in the conservation-biology community are reluctant to embrace Novak’s genetic rescue plan. Part of the concern is that the passenger pigeon Novak will end up with will ultimately be a facsimile, which is something that makes some conservation biologists nervous. Kevin Kerr, curator of birds and invertebrates at the Toronto Zoo, questions the plan and the possible authenticity of any future bird brought back from the past. “Is this really a lost species brought back to life or is this just a really interesting replica? How can we tell the difference?” he asks. Kerr sees de-extinction as a “tantalizing endeavour” but one that still has a number of unknowns. “I’d be more inclined to invest in preventing further extinction,” he says.

The unknown factors are something that frustrate many scholars. When discussing the passenger-pigeon-comeback project, Stuart Pimm, professor of conservation ecology at Duke University, doesn’t beat around the bush. “It’s nonsensical,” he tells me over the phone from Brazil, where he’s engaged in on-the-ground conservation efforts. “Even if you could recreate a passenger pigeon, where would you put it? It would be a freak in a freak show.” To him, de-extinction undermines current conservation efforts. “In fact, it creates a moral hazard,” he says. “If you can bring species back, then why care about the thousands of species that we’re already driving to extinction now?” As to whether the conservation biology community is taking the project seriously, Pimm says, “it’s considered to be a joke, a bad one, an enormous distraction.”

Indeed, the way Novak posits de-extinction and genetic rescue strikes a raw nerve in conservationists, since he challenges the very premise that conservation movements are based on—that extinct means forever. “The notion that we can fix our mistakes is an extraordinarily dangerous one,” cautions Pimm. Not only would people become complacent, he says, but the argument for protecting species would ultimately be weakened. The way forward for conservation, according to Pimm, is to “stop doing stupid things—we should not be destroying habitat, and we should look after our national parks.”

Although University of California Santa Barbara ecology PhD student Molly Hardesty-Moore agrees that de-extinction could be an opportunity to restore ecosystems, she cautions that the passenger pigeon might no longer be able to perform its unique ecological role. Not only has the bird’s habitat changed drastically in the past 100 years, but Moore explains that many of its former ecological functions, including large-scale seed dispersal and nutrient transport, came about due to its large numbers. Whether we could restore a sustainable population remains in doubt. She also notes that de-extinction may come with drawbacks. “Passenger pigeons were considered a major agricultural pest, and potential for conflict with humans is high,” she says.

Beth Shapiro, a MacArthur fellow and director of the paleogenomics lab at UC Santa Cruz, where Novak received his master’s degree in 2016, applauds how Revive & Restore is “thinking big” and engaging in the “tough conversation that makes people think about our role in past extinctions, in present extinctions, and in finding solutions to the ongoing extinction crisis.” Shapiro reasons that techniques being developed to bring back the passenger pigeon might be the way to bring the issue of extinction to the wider population. “Conservation,” she says, “is a field that could use any new attention and investment it can get.”

According to Novak, the de-extinction technologies being developed today will have concrete applications in the world. They can be used to make living species immune to foreign diseases, help suppress invasive species, and introduce climate-change adaptation in species that are currently struggling to survive. “Biotechnology has no end to offering solutions that traditional conservation is ultimately powerless to fight,” he says. “You can protect habitat, move animals around. You can do things from a traditional standpoint with manipulation and intervention, and it works, but there are some things that are proving more insurmountable.”

In spite of the criticism from colleagues and challenges in securing financial support for the passenger-pigeon-comeback project—which requires about $150,000 per year for research—Novak remains fully invested in the idea of one day restoring passenger pigeons to the wild. What motivates him, in particular, are the young students with whom he’s regularly in contact. “Elementary students love the awe and wonder of it. University students love thinking about the technological challenge and the social ramifications,” he says. Besides, Novak adds, his goal isn’t just saving individual species—it’s protecting entire ecosystems.

Julia Zarankin is a writer and lecturer whose work has appeared in Maisonneuve, The New Quarterly, Ontario Nature, and Antioch Review.