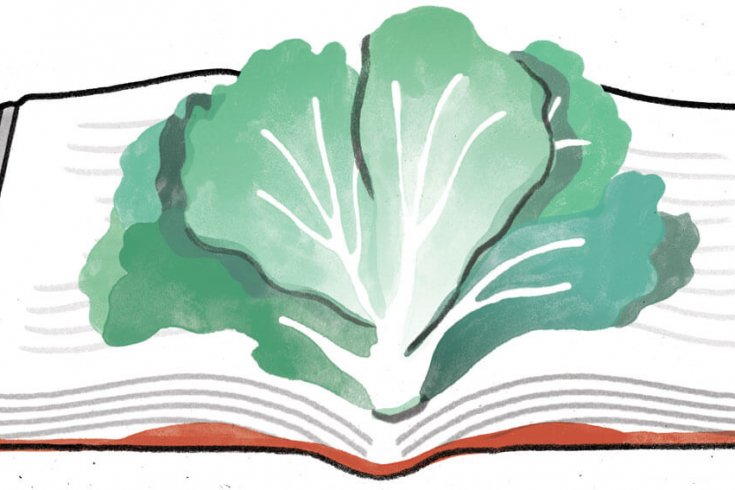 Growing up in Winnipeg in the 1960s, I longed to attend the University of Oxford. I admired scholarship and felt a desperate need to attend a school that would plumb the depths of my lazy brain. But I come from a very ordinary family; I was one of few girl cousins to pursue post-secondary education. And so I stayed home and went to the University of Manitoba instead.

My father was not an intellectual. His favourite reading materials were Reader’s Digest Condensed Books. But he was kind and sweet, and he earned my respect for including me in his extensive culinary pursuits. Our basement shelves were jammed with jars of deep red Bing cherries, halved BC peaches, blueberry wine, dill pickles, dill tomatoes, and, occasionally, pickled lettuce. Pickled lettuce is little known, but it’s a delightful spur-of-the-moment treat. You don’t have to wait until June or August for it to come into season—you could decide on a Friday night to make some and eat it that weekend with a corned beef sandwich.

Eventually, I sublimated my longing for an Oxford education and embarked on life as a filmmaker. I mostly made documentaries. It wasn’t easy. I had to raise money, be accountable to those who funded my work without losing my integrity, and assemble footage into compelling stories. I did my research and tried not to let my fear of failure overwhelm me.

My travels took me to distant lands. I was dazzled by food and was rarely presented with a dish I disliked or feared. Okay, I didn’t want a second helping of grilled cockroach or lizard in northeastern Thailand, and I sent back soup with flies in a formerly state-run cafeteria in Moscow. But my first encounters with Thai food in Bangkok and Chiang Mai were sublime experiences unmatched to this day.

Decades later, back home in Toronto, some new neighbours dropped by. They were a young couple from Moscow hoping to find post graduate work in Canada. We spent the evenings drinking vodka, telling stories, and eating whatever was in my fridge.

One cold winter’s night, I found myself without any mix for the vodka. I made a drink, explaining it contained juice from pickles made with my father’s recipe. These were not the first guests to whom I had offered this “pickletini,” but they were its most enthusiastic imbibers. I felt like we had just cut veins and exchanged blood. I talked about my father’s culinary skills, including his method for pickling lettuce. I had some in the fridge. We feasted on it. More pickletinis. Sasha, whose field of study includes lost food traditions, was overjoyed. Pickled lettuce was heretofore unknown to her.

When she asked me if we could collaborate on a paper to be presented at the Oxford Symposium on Food & Cookery, it took me a minute to absorb the news. Oxford University in Oxford? It would mean much research and writing—skills I had honed as a filmmaker applied in a different way.

Back in Manitoba, I tracked down cooks, cookbooks, and handwritten recipes. I pestered old friends for their memories of making and eating pickled lettuce. My best friend’s mother dismissed the delicacy with a wave of her hand, implying it was beneath contempt. When I raised the subject with one older couple, the husband said, “Dave makes pickled lettuce.”

His wife interjected on behalf of the other man’s spouse. “She made the pickled lettuce for Dave.”

“Yeah, and she isn’t even Jewish,” her husband remarked.

The woman elbowed her husband in the ribs. “Give her a break, she converted fifty years ago!”

I wondered if, for the Oxford audience, this sort of research would be sufficiently profound.

Finally, we were there, in the UK. In his opening remarks, the chair of the symposium warned us that audience members might wander in and out of the lecture freely—drawn to the variety of speakers and big names at the conference. What kind of Oxford education was this? It was unimaginable to me that serious scholarship might be interrupted by cocktail-party behaviour. I’ve never liked people walking out of my films, either. But I had a card up my sleeve.

I had decided to make pickled lettuce while lecturing. I lined up ingredients and readied the jars, explaining to our audience that pickled lettuce is in the category of instant ferment because lactuca sativa is so porous and so agreeable. And that if the audience stayed throughout both my talk and Sasha’s talk, the lettuce would be ready and we had enough for everyone to try. So by all means, stay, I said. And they did!

About a year later, in San Francisco, I picked up a big, beautiful new book called The Art of Fermentation. It was by Sandor Ellix Katz, one of the keynote speakers at the same Oxford Symposium. He had written in one passage, “Gail Singer grew up in Winnipeg, the granddaughter of Romanian Jewish immigrants and the daughter of a father who made many kinds of pickles.”

My dream of making it to Oxford had a long fermentation, but it came to be. We are all simply participants in the invisible transformations that are part of a life.

Gail Singer is a filmmaker and writer.
Tallulah Fontaine