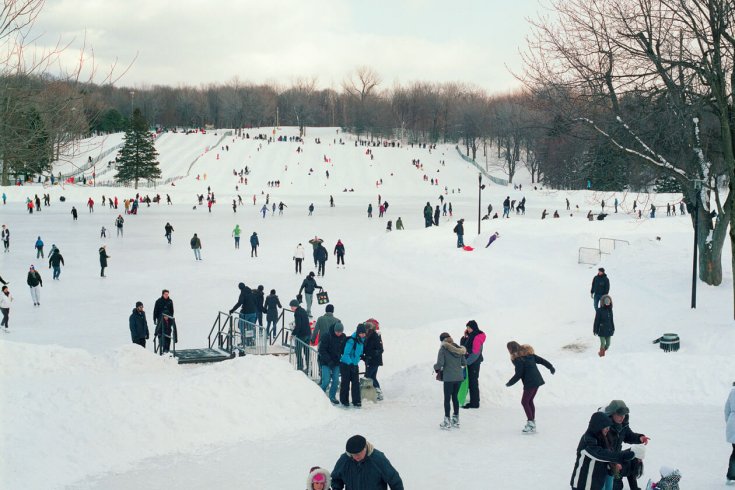 No two moments have ever been the same for me on Mount Royal. I’ve stumbled around the mountain on cross-country skis, and watched punks feed raccoons under the “Do Not Touch Me! I Carry Diseases!” sign at the Belvédère Camillien-Houde lookout point, where teens drink tall cans and make out in the dark. This is a park where drug dealers hawk bags of weed at the George-Étienne Cartier angel statue, drummers with tam-tams fill the square each Sunday in spring and summer, and slackliners draw their taut ribbons between widely spaced tree trunks. The place is home to athletes playing pickup baseball, Turkish women rolling simit dough next to picnic baskets, and mourners paying their respects in the cemetery.

That’s why the park was created—to be a shared experience. From the moment Jacques Cartier was led to one of the area’s three summits by Iroquois guides in 1535 and became charmed by its view of the St. Lawrence River and the Laurentian Mountains in the distance, Mount Royal has mesmerized visitors.

Nearly 500 years later, the mountain from which Montreal derives its name is entrenched in the city’s urban lore. It was immortalized in Denys Arcand’s 1989 film Jesus of Montreal, in which a provocative staging of a Passion play disintegrates into a scuffle between actors, police officers, and audience members. It makes an appearance in Mordecai Richler’s The Apprenticeship of Duddy Kravitz (1959), as well as in novels by Michel Tremblay and poems by F. R. Scott and A. M. Klein. In How to Make Love to a Negro without Getting Tired (1985), by Haitian-Québécois writer Dany Laferrière, the characters drink, fornicate, and suffocate in the summer heat under one of the spot’s more conspicuous features: an illuminated cross, thirty-one metres tall, that rises from the mountain’s northeastern peak. The steel structure was erected in 1924 on the site once occupied by a wooden cross placed there in 1643 by the city’s founder, Paul de Chomedey de Maisonneuve.

When the idea of turning the mountain into a park was first floated in the 1840s, it was roundly rejected. The campaign pressed on for the next three decades, facing stiff resistance from the city’s most affluent families, who had settled around the edge of Mount Royal and owned much of the land. The prevailing complaint among the plan’s detractors was that the slopes were too steep to allow for public use. But Alexander Allan Stevenson, then commanding officer of the Montreal Field Battery, disagreed. In 1862, after being asked to provide a noon-hour 100-gun salute for the Prince of Wales’s twenty-first birthday, he had his men fire their weapons from one of the mountain’s summits to prove that the climb posed no risk. The next year, to drive his point home, he did it again.

By 1872, public opinion had shifted, and most of the land was expropriated in preparation for the construction of a park. Two years later, the city hired Frederick Law Olmsted, the landscape architect who, in 1858, had become famous for creating New York City’s Central Park. According to the City of Montreal, Olmsted thought that Mount Royal’s charm—the “quality of its scenery”—would help protect citizens from the city’s harmful temptations, as well as from the “competitiveness and friction” of work. He wanted to turn the mountain into landscape poetry, with visitors being “gradually and sweetly” led up and away, and he planned to do it by enhancing the mountain’s mountain-ness. He scouted flora from all over the world: Siberian trees from Scotland, shrubs from Japan, maple trees from Norway. He envisioned filling Mount Royal’s base with rich vegetation and putting only scrubby pines and spindly firs at the top so as to create the illusion of exaggerated height.

Mount Royal would be a great common space, a vacation spot for those who couldn’t afford to leave the city in the hot summer months. Unfortunately, when the park opened in 1876, the city was in the midst of an economic depression, so most of Olmsted’s plan—which included a grand promenade around a reservoir at the top—could not be implemented. (In 1882, Mount Royal fans suffered another blow when Oscar Wilde came to town and dismissed the mountain as a “hill.”)

Perhaps worse still, Olmsted had been wrong about the mountain’s moral influence: far from saving Montreal’s citizens from temptation and “friction,” the site became a flashpoint for controversy. In the 1950s, then-mayor Jean Drapeau was warned that sexual activity on Mount Royal was on the rise, likely because it had become a cruising spot. His solution? Raze the vegetation. He ordered the removal of 30,000 trees, creating an eyesore that gave the mountain its first nickname—Mont Chauve, or Bald Mountain. Nearly ten years later, the city planted 60,000 new trees in an attempt to rectify Drapeau’s mistake.

Mount Royal continues to spark debate and disagreement. The planned refurbishment of a decaying gazebo in the park to be named in Richler’s honour has been beset by delays and cost overruns. More recently, the city has come under fire for its plan to mark Montreal’s 375th birthday next year by installing dozens of granite stumps across the mountain—at an anticipated cost of around $3 million.

Residents keep returning to the green hub at the city’s centre, an area that, as F. R. Scott wrote, “marks the hours / On earth’s sprung clock.” Kate Hutchinson’s book, The Park, distills the two years she spent photographing the ways Montrealers enjoy the park across the seasons. No matter the time of year, the mountain felt to Hutchinson like an extension of people’s private spaces. Engaged in their own strange activities, they were nevertheless willing to be interrupted and captured. “I am drawn to people who seem to have found their place,” she writes. In Montreal, that place is often Mount Royal.

Kate Hutchinson documents Montreal's Mount Royal in The Park, a book of portraits published in 2015.