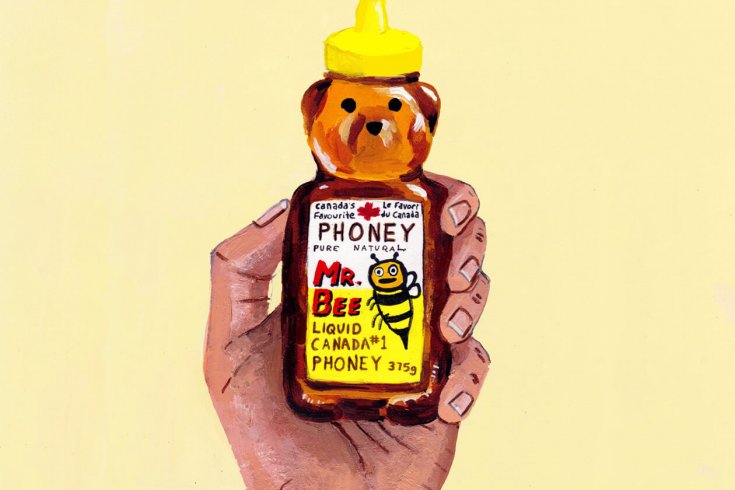 Neil specht settles into a chair in his living room in Eatonia, Saskatchewan, to talk honey after working the past twelve hours on the farm. It’s extracting season, the beekeeper’s harvest, which means he’s been overseeing twenty-four employees as they take the honeycomb from the 4,600 hives that Specht has scattered along the Alberta-Saskatchewan border from Consort to Empress to Bow Island to Medicine Hat. They bring it back to the facilities in Eatonia, remove the honey, and deliver the empty comb base back to the hives. “It’s all hands running when we’re trying to extract, and we’ve been extracting since June,” he says. “It doesn’t look like it will stop until into October. We’ve definitely had a better-than-average crop.” It’s the last day before six of his employees—kids and grandkids, mostly—go back to school.

Specht’s hives produce about 500,000 pounds of product a year, which makes Specht’s a medium-size operation in the two provinces that generate the majority of Canadian honey. He sells, as do most of his peers, to the Western Canadian co-operative Bee Maid. Like many beekeepers, he has established his base deep in the agricultural heartland. Eatonia is a speck of a town located a two-and-a-half-hour drive southwest of Saskatoon in a landscape dominated by grain elevators and pancake-flat prairie vistas. Specht has been a commercial beekeeper and a custom pollinator—hauling his hives to other farmers’ fields so that his bees can pollinate their crops—for nearly twenty years.

But this year’s crop of sweet stuff comes with a bitter aftertaste. While Specht has seen the price of honey fluctuate over his career, the drop from $2.43 to $1.11 per pound from last year to this year means he’ll be lucky to make any money off the current harvest.

“There are few, if any, honey producers that can operate at $1.11 per pound,” Specht says. “I would suspect the costs of production for most are in the $1.60 to $1.65 range.” This means beekeepers are selling at a loss, sitting on stock hoping prices will improve, or risking imminent bankruptcy. It’s a precarious situation, and Canadian producers are growing increasingly disgruntled.

Earlier this year, Manitoba beekeeper Allan Campbell challenged the purchasing practices of Billy Bee, Canada’s largest honey packer, by starting a change.org petition. Billy Bee, the petition alleges, is buying honey abroad at lower prices, blending it with local honey, and marketing it to consumers as pure Canadian. The country’s labelling regulations demand that a “grade,” or quality designation, be marked clearly on the packaging. But the “Canada No. 1” tag that appears on Billy Bee products looks as if it’s advertising the country of origin, which could lead customers to believe they’re supporting local producers when they’re not. Most table honey sold in Canada is “Canada No. 1” grade, but if you look at the fine print, you may find it’s actually “a blend of Canadian and Chinese honeys”—which could mean that nearly half of what’s in the bottle is imported.

The petition claims that Billy Bee—which buys, packages, and brands honey before distributing it, and is owned by Fortune 1000 multinational McCormick—has all but stopped buying in Canada. Spokespeople for Billy Bee have denied this, insisting as recently as April 2016 that the ratio of Canadian-to-foreign honey it sources is eighty-five to fifteen. Its Billy Bee brand is a blend of Canadian and Argentine honeys, while its Natural Honey Farms brand contains produce from China. (Although Billy Bee has also said that it continues to buy Canadian honey, the company ignored repeated requests for an interview.)

While Canada continues to export significant quantities of honey, our imports are also climbing. (In 2013, the latest year for which numbers are available, more than 26,570,998 pounds were exported and 12,114,165 imported.*) This has contributed to the price drop. “Some of the major warehouses and packing plants are full of the imported cheap honey, and they’re not buying Canadian honey at all,” Specht says.

While the “eat local” movement celebrates the hobbyist urban beekeeper—municipalities such as Edmonton have introduced backyard-hive pilot programs, along with how-to classes for the burgeoning citizen class of apiarists, both of which allegedly help combat colony collapse—the reality remains that most honey consumed in Canada has been industrially produced. “Overall,” Specht says, “Canada eats what it produces in honey—except now, we’re exporting more high-quality honey and importing poor-quality honey.”

This isn’t just about national pride. Canada makes good honey. While nearly two-thirds of the country’s exports go to the United States, one-third goes to Japan, where Canadian honey is sold as a luxury product. (In contrast, honey sold to the US is typically blended with other imports.)

Meanwhile, Canada is importing cheaper honey from all around the world. Some exporters, such as Brazil, Argentina, and New Zealand, are renowned for their honey. Others, such as China, a country that has seen its exports to Canada increase dramatically over the past five years, are known for their adulteration—which involves watering down honey with sugar syrup. “As the price goes up, there are whole businesses in China that specialize in faking. You can fake Cheez Whiz—I mean, who would want to?—but if you could fake beef, they would. When the price of something gets high, it’s faked. That’s what’s happening with honey,” Specht says.

This may all sound speculative, but an extensive investigation, published in 2011 by the Globe and Mail, showed that honey laundering is big business. Diluting real honey with sugar syrup is a cheap and difficult-to-detect way to create profit. (Labs in Europe are working to develop foolproof detection technology, but little of it has crossed the Atlantic.) And because Chinese honey is often considered suspect, it’s commonly shipped through other countries in order to evade detection. In February, after receiving complaints from Canadian beekeepers, the Canadian Food Inspection Agency recalled stock from Spain that contained traces of an antibiotic. The Canadian Honey Council also raised alerts for Zambia, Moldova, and Vietnam—all countries with historically low honey production that had suddenly started producing enormous quantities of the stuff.

Rod Scarlett, executive director of the Canadian Honey Council, complains that the situation has been exacerbated by the sporadic nature of the inspections. “If we write to CFIA and indicate there seems to be, say, an increase in the amount of Spanish honey, and we know Spain doesn’t really export honey, they would investigate that.” (The agency’s response: “The CFIA monitors imported honey for veterinary drug residues and chemical contaminants. If the CFIA identifies products that do not meet Canadian regulatory requirements, it takes enforcement action.”)

For beekeepers, the solution is simple: change the labelling requirements. Almost universally, they argue that the “Canada No. 1” label is misleading, especially since the proportions of product by country do not need to be clearly listed. A “blend of Canadian and Chinese honey” can mean just about anything. “The consumer gets a honey that tastes bad. They could be buying sugar water,” Specht says.

The Canadian government has shown no signs of adjusting its labelling requirements. To insulate himself against fluctuations in the price of honey, Specht has turned to pollination. But it’s not a perfect solution—bees that are shipped around to pollinate crops don’t produce as much honey as they would at home, the timing has to be right, and the insects themselves have to be transported at great cost, sometimes across the country. Scarlett says Specht is not alone in his attempts to diversify his operations. “There is a growing demand for pollination—for almost a decade, we’ve had beekeepers move to Atlantic Canada to pollinate blueberries.”

As the summer comes to an end, Specht’s wife, Janine, has pots simmering on the stove, madly making salsa to can. It’s been a bumper year for tomatoes, as well as honey, in Saskatchewan. In the next room, Specht is ruminating on the complexities of the modern beekeeper’s existence. “For myself,” he says, “the only way to make a living is to do something else with the bees.”

* An earlier version of the article incorrectly stated the number of pounds imported and exported.

Jay Smith is writing a book of short stories about the Albertan landscape.
Brandon Celi