Trouble in the Colonies | The Walrus
Skip to content 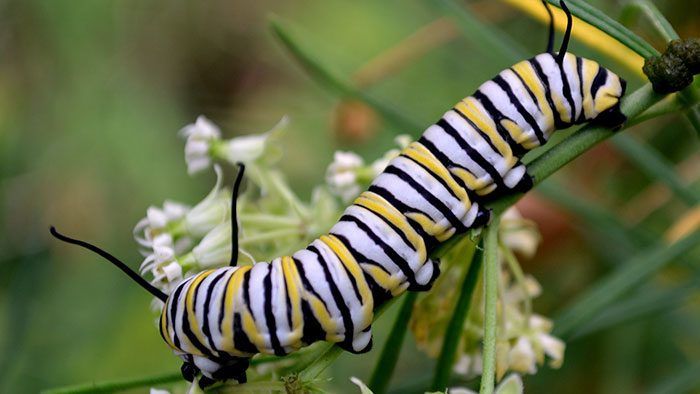 As every schoolchild knows, pollinators are in decline around the world. This is how I ended up as caretaker for Munchie Mattawa, the black-and-gold striped monarch caterpillar my eleven year old recently scooped up next to the Big Joe Muffraw statue at the confluence of the Ottawa and Mattawa rivers. This was the second summer my daughter had spent looking for monarch eggs and caterpillars to raise, and the hunt had been surprisingly hard. I’d taken her to all the places I’d remembered finding milkweed as a kid, up at the cottage and down in the city, with no success. Which is why she was so excited to find Munchie, and insisted on bringing the tiny caterpillar on our journey home.

Monarchs are in trouble because milkweed is disappearing. To combat the problem, well-meaning gardeners like my mother are planting the stuff at home. The real problem, though, is that even at the start of this planting season, milkweed was still listed as a noxious weed under Ontario’s Weed Control Act, with helpful notes for farmers on how to control it with pesticides like glysophate.

Milkweed has since been removed from the kill list, but it will be years before the province has a healthy number of monarch hosts again. The problem is that legislation to curb pesticide use moves slowly. Earlier this week, while hundreds of species of bees were out foraging between thunderstorms in southern Ontario, the Globe and Mail published another article about the alleged relationship between neonicotinoid insecticides and rising bee mortality rates. Pesticide-wielding Big Agriculture (as represented by CropLife Canada, a lobby group for those who manufacture, develop, and distribute plant science technologies, such as Bayer and Syngenta) complained farmers would be “handcuffed” if Ontario restricted neonic use by requiring a licence to apply it. A recent Conference Board of Canada report (prepared with financial assistance from CropLife) warns that restricting use of the pesticide could cost Ontario as much as $630 million per year.

But the cost of dying bees could be much greater. The number of global crops that depend on animal pollination grows every year, and the stat that gets trotted out with every bee story bears repeating: as many as one-third of our crops could be imperilled if our bees die out. If we think of this in dollar terms, on a global scale, it could cost as much as $209 billion. And that’s without considering the impact on livestock feed crops, such as alfalfa and clover.

Neonicotinoids have been applied to crops in North America since the 1990s; they were recently found on samples of about half the “bee-friendly” plants you might buy at your local garden centre. Here in Canada, opposition to this class of pesticide, which is typically used to coat corn, soybean, and canola seeds before planting, grew increasingly vocal after an unusually high number of bees began dying off in the corn-growing regions of Ontario and Quebec in 2012.

This was the first major scare over neonics in Canada, but there have been others in the US and in Europe, where, last December, the European Commission began restricting the use of three pesticides belonging to the neonic family for a period of two years—long enough, we can hope, for researchers to study what kind of an effect they may have on pollinator populations.

We have been slower to act against neonicotinoids in Canada. In June 2012, Ontario beekeepers sent a delegation to Ottawa to lobby for a ban. Then someone at the association got savvy: they drafted a petition directed to Ontario premier Kathleen Wynne on change.org. Jeff Leal, her minister of agriculture (a post Wynne herself once held), is now proposing to restrict the use of this class of pesticides, requiring farmers to seek a licence to apply it. Since much depends on how you use the pesticide (don’t plant seeds on windy, dry days), a licence that ensures farmers know how to apply it safely appeals to common sense. According to the Western Producer, such a requirement would make Ontario the first jurisdiction in North America to limit neonic use, and would prove once again the truism that Canada keeps one foot in America and another in Europe.

While the bees may have public opinion on their side, the companies coating seeds with neonics have deep pockets, and misinformation abounds. Pierre Petelle, who represents CropLife, told the Globe on Monday that “pollinator numbers are on the increase” and that “there’s never been more bee colonies.” His assertion is misleading at best. As the article points out, if the number of honeybee colonies across Canada did increase between 2009 and 2012, this is due to the practice of splitting hives and importing new hive material to replace the bees that keep dying off.

What very few news reports discuss, though, is the fact that the neonicotinoids aren’t just toxic to honeybees; they are also toxic to our 800 species of wild bees, which may be doing more work to pollinate our crops than we give them credit. Since wild bees don’t give people jobs, or make people money the way the honeybees do, we tend to overlook them. Or perhaps our indifference is a form of hubris: since we don’t cultivate them, we figure they must not count for much.

Even among honeybees, it’s not clear how great a role neonicotinoids play in the general decline of bee populations. Most bee experts believe this toxic class of pesticides is just one in a long list of problems; researchers at the University of Guelph, such as Ernesto Guzman, think the bee’s own pests, especially the vampiric varroa mite, may pose a greater threat, as he told me when I interviewed him in 2012. We may not have all the evidence yet, but surely, in the meantime, we should be doing everything we can to protect these vital species.

If there’s one thing I hope my daughter will learn from her monarch-rearing exercise, it’s that each of us has a role to play. We left our raspberry canes up to house bees over the winter, and planted milkweed in our front yard, much to our neighbour’s chagrin. Maybe we’ll put Munchie to pupate on one of those plants when my daughter returns from overnight camp. Or maybe we’ll leave the fattened caterpillar to spin its chrysalis in the plastic tomato container it currently calls home. Eventually, I hope, we’ll watch it fly away.