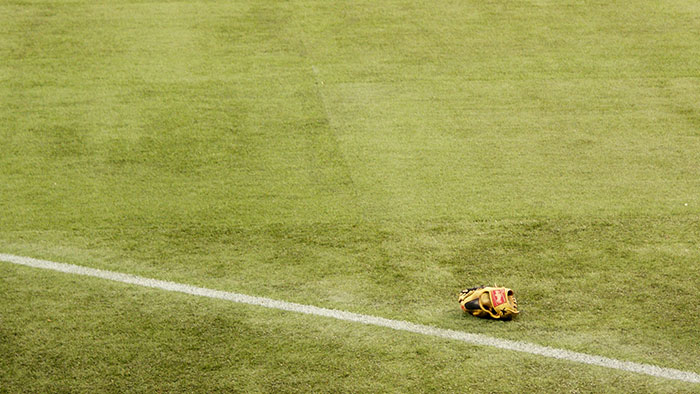 “…woman is out there, representing ‘points’ to be scored—a trophy to be wooed, captured, seduced, suckered or even smacked over the head with a club. And men who play baseball come standard with a club.”—Dirk Hayhurst, “Minor League Manhood”

The standard narrative when someone finally confesses to witnessing a years-old crime is one of remorse. We expect to see guilt, the regret of doing nothing, and then the subsequent begging for forgiveness that should come with having allowed something horrible—something criminal—to happen. Yesterday, when former major league baseball pitcher Dirk Hayhurst published “Minor League Manhood,” his horrifying account of repeated sexual misconduct, violation, and rape in the minor leagues, we didn’t get that. Instead we were asked to believe, in a flood of social media support, that Hayhurst is courageous for sharing the sordid details, eleven years later.

The piece, “a first-hand account of masculine sports culture run amok” published at Sports on Earth, is a compendium of egregious misogyny—and criminality—on the part of the 2003 Eugene Emeralds minor league team. Hayhurst candidly documents his time with them, focusing on the toxic stew of alpha masculinity that viewed “bagging girls” as the mark of manhood. Women lack identity and agency, becoming nameless, faceless points in a hierarchy system, with the most lays garnered in the most perverse ways earning a player the most respect from his teammates. A majority of Hayhurst’s telling consists of standard asshole behaviour—players sleeping with as many women as possible, grading said women’s performances, and then grotesquely bragging about the details. Women are referred to as “beef” and “tunnels,” when they’re not being called “Cleat Chasers,” “Slump Busters,” “White Buffalos,” “Yard Rats,” “Butter Faces,” and “Promotions.” But at a certain point in the narrative, things veer beyond heinous jock behaviour into something altogether more monstrous, with women being coerced, subjected to surprise group audiences during sex acts, and videotaped without their consent. (Not to mention a reference to one girl who is underage. Her father arrives to rescue her, wielding a two by four, from an unnamed teammate’s clutches.) Most disturbingly of all, women are “tricked” in the dark into sleeping with men other than the one they have agreed to. Rape is justified with the phrase “chicks love ballplayers.”

The day before the piece was released, Hayhurst tweeted (and later deleted) “tomorrow I light the world afire,” a sentiment that suggested he was more social justice warrior than part of the problem. Somehow the combination of sports and rape makes the rules of appropriate action and repentance dramatically different, suggesting we should collectively praise Hayhurst for the mere act of opening his mouth. In fact, the bar for sports dialogue is so low that a quick tour of the article’s comments reveals people (mostly men) congratulating him for speaking out, and for articulating a hope that others will read his piece with the goal of “raising awareness.” Prominent “progressive” sports media types and “male feminists” have shared the piece enthusiastically, praising its importance and declaring it a must read. But for those of us who understand that toxic masculinity and the threat of sexual violence are terrors that women face daily—especially within sports culture—there has been no such admiration. We remain both unsurprised and unimpressed.

“Thus, the 2003 season became the summer of voyeuristic sex,” Hayhurst writes. “I saw more texted photos of bare asses over legs that season than in all my other seasons in the minors combined. Videos were passed around clubhouses. Critiques of technique were given, as well as tips for hiding a camera better.”

In all of this, Hayhurst paints himself as the non-complicit innocent, the kind of guy who brings a girl (“a cute little Greek number”) back to his room for a coffee and a chat while other players pound on his door and make climax noises. At another point he feels sick to his stomach over a screened videotape, having to look away when a teammate beds a different woman—“tall and curvy…the Venus of the ball field”—who Hayhurst has a crush on. (Nonetheless, he stays to hear her state on film that it’s her “first time.”) Later, when one teammate questions if he’s going to “tell” on him for rape, Hayhurst says, “No, I guess not. But, you know, it seems wrong.”

Full disclosure? I like Dirk Hayhurst. Earlier this year, I had the opportunity to interview him for a piece on the precarious relationship between sports and mental health. I immediately appreciated his candor, an ex-player who, in his perhaps fumbling way, genuinely wanted to use his platform to expose the broken and damaging elements of sports culture. I truly believe that he had the same intentions when he divulged the sexual abuse and exploitation of women in the minor leagues, but instead the piece sits as reminder that women are rendered as objects without agency by a variety of sports narratives, including Hayhurst’s personal one. A more critical view would suggest his is another case of men appropriating rape victims’ stories for the sake of securing their own heroic narratives. It’s certainly not Hayhurst’s fault that our standards for dealing with rape in sports are so lacklustre that when a player merely talks about it happening, he is mistaken for valiant and heaped with praise. But when Hayhurst writes, “Nothing did happen. No penance was paid for those poor, suckered women. No sins were atoned for…” it’s as if he doesn’t realize that it’s his fault too, as much as it’s the fault of any man who stands idly by while the objectification, demoralization, and assault of women happens again and again.

Those who love baseball often hold it up as the intelligent fan’s sport. We believe it to be wholesome, wise, and poetic, somehow above the violent, abhorrent behaviour of other professional athletic pursuits. The reality is that MLB’s record on domestic violence is actually worse than the NFL’s. Baseball’s romantic mythology conveniently conceals a long list of threats, beatings, and rapes that the sport’s powers that be have egregiously failed to punish. Women continue to be the voiceless victims of a regressive, sanctioned culture; Hayhurst’s piece and the so-called “awareness” it garners exert no pressure on actually changing that. There is no consequence for the perpetrators or bystanders, no punishment for the institutions—just a token gold star for the player who, eleven years later, set a corner of the Internet afire with a salacious tale.

The fundamental problem with praising Hayhurst for his honesty is that it sends a dangerous message to men in every community that doing nothing is enough. We tell them that they can witness the repeated abuse of women in an institutionalized way—but as long as they talk about it years later, without any fear of repercussions, they’ll not only be immediately forgiven, but also lauded as heroes. We imply that as long as they say they thought it “seemed wrong” at the time, we won’t brand them as complicit. I certainly believe that the Hayhurst of today—wiser, more mature than the Hayhurst of 2003—would not watch his teammates violate women and videotape them without their consent. But the fact remains that saying something now—with the offending names changed, and therefore the stakes of revelation greatly reduced—fails to negate doing nothing then. It doesn’t change the fact that when Hayhurst promised his former teammate he wouldn’t tell, he was being cowardly in an arguably criminal way.

In the end, though, the problem is not Dirk Hayhurst. Hayhurst could be anyone—a stand-in for every man who has ever witnessed the violation and abuse of a woman then said “No, I guess not” when asked if he was going to say or do anything about it. He is every man who listened to a friend tell him a story that made him uncomfortable, every man who witnessed conduct that made him sick, every man who simply walked away. If we let Hayhurst off the hook, if we call him brave, we make it okay for all men to do nothing—and when it comes to sexual assault, doing nothing to stop it is the same as doing something wrong. In the end, is it better that Hayhurst wrote about it than not? Probably, yes. But we shouldn’t confuse writing with heroism, when really it’s the moral bare minimum.

After his piece’s publication, Hayhurst responded to one commenter’s feedback with a tweet that reads, “Seriously, if I have a daughter, she grows up never knowing baseball exists.” I wish, instead of protecting women from baseball, that the men within the sport would make it a personal and institutional project to finally punish rapists and become better men, not merely to write about it. Rather than giving Hayhurst admiration for his bravery, we should cite him as an example of what we shouldn’t do when we witness first-hand the damage that sports culture has done. I’d instead save the bravery label for the women who endure its dangers, simply to enjoy a sport they love.