The Little Hut that Could | The Walrus
Skip to content 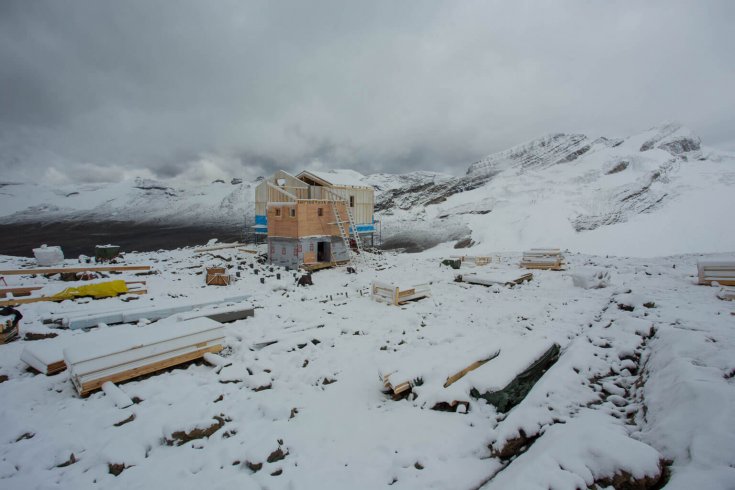 Photograph by Will Schmidt

Perched on the shoulder of Mont des Poilus in British Columbia’s Yoho National Park, the shell of a half-built, one-room hut sits on stilts above piles of construction materials: window frames, large steel and wood beams to be milled on site, insulated wall panels. A short walk along the ridge’s loose, shattered rock leads to a small tent city that’s home to half a dozen volunteer builders and some aggressively hungry ground squirrels. Here, a ten-minute helicopter ride—or two-day hike—away from the nearest highway, the first backcountry camping hut is being built in a Rocky Mountain national park in more than two decades.

When finished, the Louise and Richard Guy Hut will be one of thirty erected by the Alpine Club of Canada across the country since 1909, with twenty-seven of those located in Alberta and BC. Practically, the hut will ease the otherwise punishing distance along a ten-hour ski route in the Wapta Icefield. Thirty years ago, Alpine Club member (and a volunteer for this week’s construction duties) Paul Geddes skied over the pass and bivouacked in a snow cave. At this remote site, the hut is sorely needed: In 2007, the bodies of two mountaineers were found in a collapsed snow cave. In 2014, after three years of consultation with the Alpine Club of Canada, Parks Canada approved the new hut.

While the hut may be “the Wapta’s missing link,” it is also an easy and convenient nod to a community of backcountry enthusiasts, like Geddes, who can be touchy about Parks Canada’s bids to bring more people through their gates. Building “links” in a national park is never easy. This is especially true in the Rockies, a region that is both the welcoming face of Canadian tourism and one of the largest and wildest conservation areas in the country. The challenge that Parks Canada faces in meeting its mandate, to protect the wilderness while also making it accessible to Canadians, is personified up at this mountain pass: How can access and conservation exist as one?

Last year, a glass-floored walkway dubbed the Glacier Skywalk was bored into the side of the Icefields Parkway (Highway 93) near Jasper, AB, but not before causing considerable outrage surrounding its ecological impact. Around the same time, a via ferrata (a fixed ladder for easier rock climbing) was installed on Banff’s Mount Norquay. And Rouge Park in Scarborough—touted as Canada’s “people’s park” and the first Canadian urban national park—has been mired in years-long controversy surrounding what it takes to bring conservation within city limits. (The province of Ontario owns most of the land set to become the park, but has refused to transfer it over to Parks until the land management plan focuses more on ecological integrity.) Even development in the backcountry has undergone its own transformation. Standing at the pass near the construction site, Geddes says that in the ’80s there was a chill from Parks Canada when it came to hut building in the backcountry. “They didn’t want huts, they wanted it to be entirely wilderness,” he says, listing off instances when ACC huts were actively removed. “Now it’s much more about environmental impact.”

But Parks Canada needs bodies through gates to prove its value, and there is a certain elitist snobbery involved in backcountry usage that tends to discourage most Canadians from even trying an excursion more than a few kilometres off the highway. “I don’t think your average Canadian is going to ski back here with a tent,” says ACC executive director Lawrence White, from his vantage point behind the new hut that day in Yoho. The club estimates fewer than a hundred skiers traversed the route in 2014.

Meanwhile, Parks is peppering viewpoints across the country with red Adirondack chairs, encouraging visitors to sit, pull out their smartphones, and tweet using #timetoconnect and #sharethechair. It’s hard to tell if any of these initiatives bring in more visitors. This year summer attendance increased for the Rocky Mountain parks, but this may have more to do with a low dollar and a sinking price of oil keeping us home. When it opens this winter, the new Alpine Club hut may end up as little more than a token nod to the region’s mountaineers, while Parks turns back to establishing WiFi hotspots. But what does this little shelter mean for access to Canadian parks? If we’re using accessibility as a metric, building a hut in the great outdoors stands contrary to the mandate of Parks Canada even more than a glass-and-steel walkway bolted into the side of a mountain.