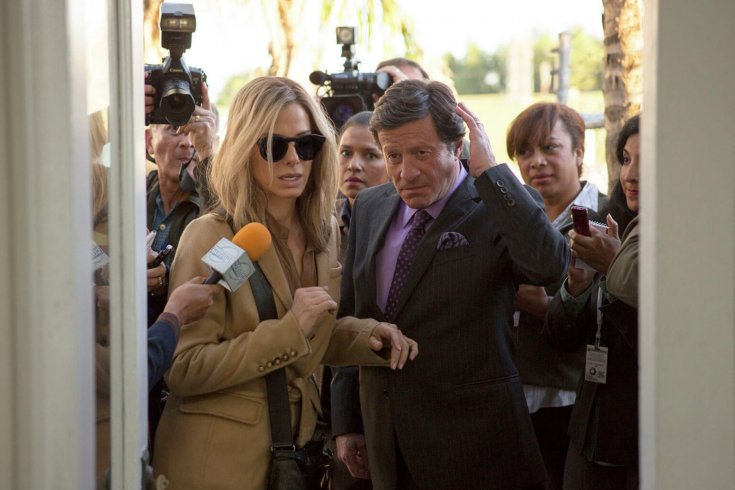 Here’s the elevator pitch: an aloof, right-of-centre national leader is behind in the polls. His gaffe-afflicted campaign refuses to spark. But when his advisors take a flyer on a foreign political consultant with a reputation for ruthlessness, everything changes.

The carpetbagger turns the race around by getting the candidate to become more aggressively partisan—hitting opponents below the belt—and overhauling his own image. “You don’t change the man to fit the narrative,” the consultant tells us. “You change the narrative to fit the man.”

No, this isn’t Stephen Harper’s back office. It’s Our Brand Is Crisis, a Toronto International Film Festival–premiered film starring Sandra Bullock as the brittle hired gun in a Bolivian presidential race with eerie Canadian overtones.

On the very night I attended—accompanied by veteran Conservative insider Will Stewart—national political reporters were buzzing about news that Harper had retained the services of one Lynton Crosby, a hard-driving Australian strategist dubbed the “Wizard of Oz.” Crosby, known for rough tactics and anti-immigrant bluster, last year helped engineer a majority win for British prime minister David Cameron (whose Conservative party ponied up $835,000 for his services).

“Everyone expects he’ll have an impact,” remarked Stewart after the screening. Adapting one of the fictional spin advisor’s catch phrases, he added: “You’ve got to let Harper be himself.”

The nattily dressed forty-five-year-old is a partner at Navigator, a Toronto strategic communications and political research firm founded by former Mike Harris aide Jamie Watt. Its somewhat ominously accented website features an exploding light bulb, a 24/7 “crisis line,” and a noir-ish, by-any-means-necessary vibe. (“There is always a way forward,” it prominently informs visitors. One imagines desperate potential clients—think Jian Ghomeshi—coming to this URL during moments of intense panic.)

It was Navigator’s marketing types who’d invited me to watch Crisis with Stewart, giving him the opportunity to demonstrate his professional acumen by parsing Bullock’s strategic choices as she transforms her unlovable candidate into a winner.

And Stewart does in fact know a thing or two about the dark arts of reputation management. After serving as chief of staff aide to John Baird in his days at Queen’s Park, he worked on various Tory campaigns, including Tim Hudak’s blockbuster disaster in Ontario last year. Stewart also ran fundraisers for Conservative transportation minister Lisa Raitt (which led to him getting called to account by the federal lobbyist watchdog for breaching rules that preclude registered lobbyists from participating in campaigns). Now a regular on the pundit circuit, Stewart is watching the federal race from the cheap seats.

Political spin-doctoring is a reliably entertaining subject for TV and movies. The War Room, a 1993 documentary about Bill Clinton’s improbable presidency by Chris Hegedus and D. A. Pennebaker, gave viewers a peek into the political sausage factory. Four years later, Barry Levinson’s Wag the Dog offered a Clinton-inspired satire about how a political operative and a movie producer join forces to beat back a sex scandal. (Stewart tells me that he’s seen Wag the Dog posters hanging framed in the offices of many a political consultant.) More recently, House of Cards has explored the subject of political crisis management in detail—including an unforgettable subplot involving a sex worker who knew too much.

In Crisis, Bullock’s character (nicknamed “Calamity Jane”) tackles her job with manic energy. One of her first orders of business is replacing the candidate’s kids-gloves ads with attack spots (the same tactic Harper used with Michael “Just Visiting” Ignatieff and Justin “Not Ready” Trudeau). The strategists in the film have a predictably longwinded debate about the ethics of going negative and the problem of alienating voters. Stewart points out to me that so-called “compare-and-contrast” ads—as folks in his industry euphemistically prefer to call them—“are not designed to be likeable. People use them because they’re effective. They change the way people perceive the other candidate.”

Stewart appreciated the tech-savvy sidekick character who Calamity Jane tasks with “oppo’ research”— i.e., dredging up dirt from official records and social media on the other candidates. This being a movie, the young American woman wastes no time unearthing Bolivian state documents that reveal all sorts of misdeeds. And Bullock’s character adds some spice by circulating a rumour that this same rival may have associated with Nazi fugitive Klaus Barbie.

Bullock tells her team that she doesn’t care if the rumour is true. She just wants voters to see the guy deny it. And so he does, to great effect. (That kind of “skullduggery” doesn’t happen in Canada, Stewart assured me—although the Tories’ robocall scandal, the Liberals’ sponsorship scandal, and various other political mis-adventures suggest otherwise.)

As our conversation turned to real life, Stewart bemoaned Harper’s cold response to the refugee crisis. Not responding more emotionally when young Alan Kurdi’s body was photographed on a Turkish beach was the first obvious mistake. Failing to frame his comments on security concerns alongside his government’s defensible record on refugee intake was a second.

In the film, Bullock counsels her candidate to emote publicly about his drug-addicted son during a television interview. Harper, Stewart reckoned, also has to “show some personality.” After the Kurdi image surfaced, for example, “he could have used three minutes more of that emotion.”

But there are other ways of filling out the picture. Stewart cited the example of a clip of the Canadian prime minister sitting on the back of the campaign bus, playing video games with his son. It was a good image, he felt—adding that Harper could benefit from more of the same. (Since Crosby joined the campaign, perhaps not coincidentally, Harper’s been photographed several times playing ball hockey or at least holding a stick.)

As Stewart noted, the ads, sound bites, and oppo’ research in Crisis deal with only one component of a modern campaign—the so-called “air war.” The “ground war”—guys at computers working voter-contact databases, managing sign crews, and organizing the get-out-the-vote campaigns in tactically significant ridings—is anything but cinematic, and not something that Stewart and his ilk generally do for clients.

Yet with the Canadian campaign apparently locked in a three-way tie, the race is still “all about messaging,” Stewart said. “All the war rooms are saying: we need to break free of the pack. Harper’s got to be willing to take risks.”

On screen or off, every leader wants to leave power on his or her own terms—not by getting outmanoeuvred by the likes of Calamity Jane.