The Future of Cities | The Walrus
Skip to content 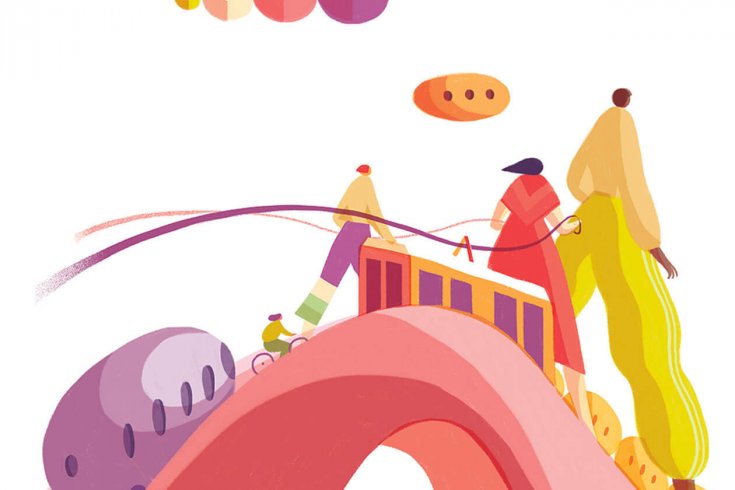 An illustration on The Future of Cities by Wenting Li

The city of the future already exists. It’s not Masdar City, the walled “cleantech” hub being built in Abu Dhabi, where sheikhs, workers, and technocrats will commute to corporate offices in solar-powered personal transport pods. Nor is it Chengdu’s Great City, a low-carbon eco-district to be completed by 2020, which will house 80,000 city dwellers in “supertall” towers.

The city of the future is contained in the cities we already inhabit. As Italian author Italo Calvino observed in his classic novel Invisible Cities, any one city can harbour a multitude of others. Sprawling Calgary will soon incorporate swaths of Manhattan-style density near its core, Tokyo’s public parks shelter homeless villages straight out of Mumbai, and the outskirts of Guangzhou are dotted with McMansions that evoke the exurbs of Houston.

Metropolitan areas can, and must, plan for the future by looking into our collective past for better ways to manage space in the here and now. “Cities,” Edward Glaeser proposes in Triumph of the City (2011), “are the absence of physical space between people and companies.” It’s the kind of reductionist definition you might expect from a Harvard economist, but Glaeser hits on a deep truth. Lives, passions, struggles, and ideas brought into close proximity create the ferment that, in turn, fosters civilization. Without Rome, there would be no Bernini or Fellini; without Tokyo, no kabuki or Murakami; without New York, no George Gershwin or The Great Gatsby. Cities not only foster civilization, they are also one of the greatest products of civilization. Standing alongside expressionist cinema, the plays of Shakespeare, and improvised jazz are the arching bridges of Zhouzhuang and the serpentine hilltop streets of Siena. Cities, done well, count among humanity’s greatest masterpieces.

If we are currently doing a poor job of building them, it’s because we insist on catering not to the needs of city dwellers but to the demands of cars. The modernist ideology that divided our cities into zones of commerce and employment—malls, subdivisions, and office parks connected by expanses of asphalt—abetted the spread of suburbs and exurbs. The damage, in the form of wilderness-gobbling sprawl, can seem irreparable. But it is well to remember that the automobile city (which urbanist Lewis Mumford called the “anti-city which annihilates the city wherever it collides with it”) is a largely postwar phenomenon. Urban history goes back to at least 7,400 BC, when neolithic artisans gathered together in the settlement of Çatalhöyük in what is now Turkey. That is why I remain optimistic about the future of cities: the walking city predates the automobile city by a good nine millennia. Time is on its side.

Allow me a conservative prediction. In the next quarter century, as congestion and pollution overtake more cities—among them Lagos, with its twenty-four-hour traffic jams, and Beijing, with its ever-expanding web of orbital roads—urban areas that limit traffic will reap the rewards. London has poured revenue from its congestion charge into improving its bus network, turning the city centre into a place where getting around on bicycle and foot is a pleasure. Paris is augmenting its urban rail network with an automated metro, which will, by 2024, allow rapid travel between inner-ring suburbs, rather than just to the centre. Bogotá, once a byword for urban violence, kicked cars off its sidewalks and introduced a bus rapid- transit system that operates like a subway on the street. The payoff comes from not only better public-health outcomes (fewer traffic deaths, respiratory illnesses, less obesity) but also higher reported levels of satisfaction. A city that prioritizes active transport, transit, and intelligently planned density is a happy city.

Halfway through Invisible Cities, Kublai Khan remarks to Marco Polo that he has described many cities but never his home town. Marco Polo replies: “Every time I describe a city I am saying something about Venice.” In the same way, when I think about the future of the world’s cities, I am thinking most intently about the future of one city in particular: Montreal, where my wife and I are raising a young family. In the years to come, I’m looking forward to exploring the great cities of the world with my sons—by foot, by bicycle, and, if current plans for Montreal come true, by elevated and automatic electric metro. The places we’ll enjoy the most, I suspect, won’t look that futuristic at all. The best of them will be what cities have been since humans started gathering in them, over 9,000 years ago: places dense with humanity, connection, civility, and hope.

Taras Grescoe (@grescoe) has written for the New York Times, the Guardian, and The New Yorker. His next book, on the rise of fascism in Italy in the 1920s, will be published in 2019 by Biblioasis.
Wenting Li