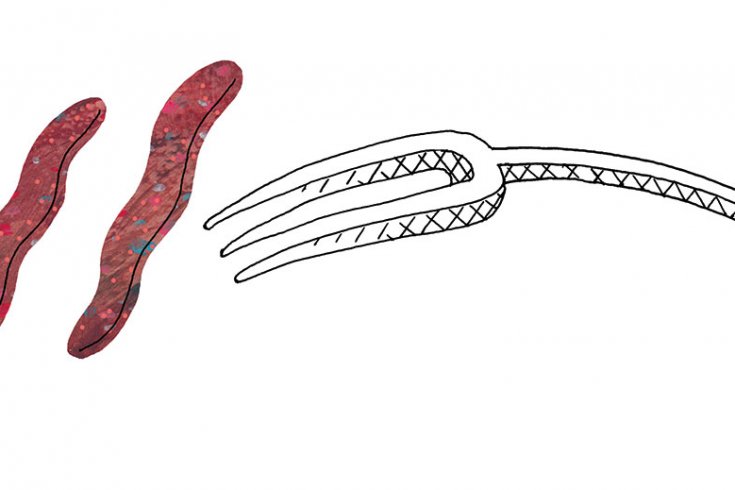 Sam Tawachi is taken aback when I arrive for a tour of Athena Donair’s factory, in north Edmonton. “You brought a loaded camera,” the bespectacled owner says, pointing to my Canon. “A few shots, we don’t mind. We just don’t like video.” He’s worried that I’ll leak unpatented designs of his robotic assembly, which squeezes up to 14,000 kilograms of moist, orangey ground beef—not entirely unlike soft-serve ice cream—into large plastic cones every day.

Like shawarma and gyros, donairs are a meaty delicacy shaved from a rotisserie spit and wrapped in pitas—only spicier and sweeter. If you require further explanation, then you’re from neither the Maritimes (where they were invented, in the 1970s) nor Alberta (where they’re most consumed). Topped with a sweet, creamy sauce, they are a Canadian take on tzatziki-coated beef and lamb gyros, which themselves are a Greco-American take on centuries-old Turkish rotisserie lamb (a dish that also spawned a blander German variant called döner kebab). Adding to the cultural confusion, most donair operations are run by Lebanese immigrants such as Tawachi—or my father, Ahmed Mouallem, who introduced Athena’s product to my hometown of High Prairie, Alberta, in 1995. The town of 2,666 now supports four different restaurants that serve the food, but only three traffic lights.

Tawachi leads me through the 17,000-square-foot facility, which produced $5.3 million worth of beef, sweet sauce, and serving equipment in 2013. “You could get lost in here,” he says, leading me into the aromatic storage room, where the scents of cumin, paprika, and twenty-six other seasonings waft from large paper bags. He points out the spits and warmers he built himself. Now fifty-eight and greying, he says he’s “too old for welding.”

While his twenty-five-year-old son, Maher, fields distribution calls in an office that features a photograph of Mecca’s Kaaba and an ATHENA1 licence plate, Tawachi recalls his first attempts at manufacturing the meat by hand. He was Maher’s age when he and his father opened a sandwich shop on Edmonton’s north side in 1982. Noting the popularity of the donair shop across the river, on Whyte Avenue—a street that today teems with club-goers and nine vendors that cater until 3 a.m.—he decided he would try to make his own.

At first, the meat was disastrously brittle and dry. People laughed at him. But after months of experimenting, he nailed the technique. Soon he was hauling large amounts of beef into the basement of his home—illegally—to supply competing restaurants. “It would take me an hour and a half to make six cones,” he says. “Now I do four cones in one minute.”

No one, including John Kamoulakos, who with his brother Peter invented the street food in Halifax, is quite sure how donairs migrated from east to west. Aaron Tingley of Tony’s Meats (based in Antigonish, Nova Scotia), a supplier that purchased the Mr. Donair trademark and recipe from Kamoulakos in 2005, thinks Maritime labourers might have driven Alberta’s demand: “They want to experience a taste of home.”

That’s what Chawki El-Homeira was thinking in 1978, when he left Halifax to chase the Alberta oil patch. Only he was going to feed the workforce. The sixty-seven-year-old remembers his first encounter with the donair, in March 1976, as if it were yesterday. He’d arrived in Nova Scotia from Lebanon with neither family nor English and got a job washing dishes in a restaurant that served the delicacy. “Something attracted me to it,” he tells me. “It was close to our food: it’s pita bread and spicy, quality beef, like shawarma. I thought, someday I’m going to open my own donair shop.”

After watching Maritimers migrate to Fort McMurray, he packed his bags and followed. The timing was terrible. The oil patch dried up in 1980, before he could secure a lease (like a true Albertan, he blames Pierre Trudeau’s National Energy Program). So he drove a cab instead, first in Fort Mac, then in Edmonton, looking for commercial vacancies while the meter ran.

On a fellow cabbie’s tip, he purchased a submarine-sandwich shop on Whyte Avenue in 1982 (the same year Tawachi opened his) and introduced his Dartmouth recipe to Albertans one slice at a time, offering customers free samples. Word spread of “Charles Smart Donair” (his anglicized name and a poorly translated Arabic adjective), and soon he had a monopoly as a supplier to other Lebanese shop owners. Then his best customer tried to copy his technique and, he claims, sabotage his business by spreading rumours to his predominantly Muslim clientele that he, a Christian, spiked his product with pork.

The alleged saboteur was Sam Tawachi.

He denies the allegations and accuses El-Homeira of defrosting his meat on the unclean floor. “Disgusting!” he says, perched on the edge of his cluttered desk at Athena Donair.

El-Homeira says it was that kind of community bickering he was trying to protect his sons from when he retired in 2008 and sold Charles Smart against his sons’ wishes. He holds no grudges: “I believe that what belongs to you, belongs to you. What you’ll work for, you’ll get.”

The semi-retired Tawachi, meanwhile, is handing the reins to his three kids, who’ve already added an Oilers flag, a Scarface poster, and an Xbox to the lunch room. Their first order of business: install new meat grinders to double production.