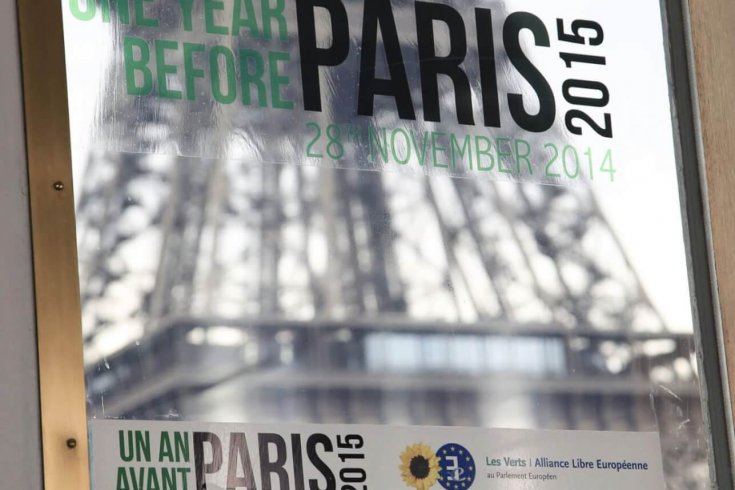 Leading up to COP21 in Paris. (Photograph by greensefa)

From November 30 to December 11, delegates from 195 countries will meet in Paris to create an international agreement on climate change. The goal of the twenty-first Conference of the Parties, or COP21, is to keep global average temperatures from rising more than two degrees Celsius. Some environmentalists in Canada are hopeful that this will be a moment of positive change—with the election of the Liberals, our representatives are likely to take a stronger stand on the climate. But it takes more than one country to reach an accord. Will the countries work together, and will their commitment make a difference?

In 1992, the United Nations’ “earth summit” in Rio de Janeiro acknowledged the existence of anthropogenic global warming, and committed to stop it. The United Nations Framework Convention on Climate Change placed most of the responsibility on countries that were already industrialized. It would be a challenge, but they had reason to believe an ambitious, multilateral plan could work; just a few years earlier, the international community signed onto the Montreal protocol, phasing out ozone-depleting products. Five years later, the Kyoto Protocol pledged to reduce greenhouse gas emissions, and came into force in 2005. Although it was “legally binding,” many countries did not meet their targets—including Canada, which missed by about 30 percent and then withdrew altogether before it had to purchase costly carbon credits and put itself back in the green.

The 2009 summit in Copenhagen raised hopes that another serious agreement would be reached, but it collapsed into factionalism and confusion. Two years later, the parties met again in Durban, South Africa, and committed unequivocally to developing “a protocol, another legal instrument or an agreed outcome with legal force.” It is hoped that this will finally happen in Paris.

One reason Copenhagen failed was that the targets that individual countries were willing to set weren’t clear in advance. This time, 75 percent of countries representing 86 percent of global emissions have submitted snappily named “intended nationally determined contributions,” or INDCs, detailing how much each will cut back.

Among the largest polluters, China has promised to reach peak emissions levels by 2030, though it will try to do so earlier. Under the UNFCCC, responsibility for cutting emissions lies largely with developed countries, as they are also responsible for the majority of historic emissions. However, according to the Climate Group, China has been catching up. Considering emissions from 1990 until today, the country has polluted almost as much as the United States, and is now responsible for about a quarter of global emissions.

In India, emissions will increase, and the country has not said if or when emissions will peak. The country pledged a 33–35 percent reduction to the intensity of its emissions as a percentage of GDP by 2030, compared to 2005 levels, mitigating the consequences of its continued growth.

The United States, the world’s second-largest polluter, has promised to cut its emissions by 26–28 percent by 2025, compared to 2005 levels. However, any legal commitment the US makes in Paris could quickly get complicated. While President Barack Obama is able to sign “executive agreements” internationally on his own authority, the US Senate has to ratify treaties. If the agreement contains language that makes targets binding or enforceable, problems could ensue, like when the US signed onto but never ratified the Kyoto Protocol.

Scientists generally agree that our civilization can’t adapt to anything greater than a four-degree increase in global average temperatures. (Estimates projected from current emissions rates show the temperature could increase by about five degrees by the end of the century.) The Paris conference wants to limit that increase to two degrees.

If the targets proposed by each country in their INDCs are achieved, it will cause a 2.7–3.5-degree increase in global average temperatures. That’s within the range of adaptability, but it will still be catastrophic. We will have to do more than tweak building codes to account for basement flooding. Even at the 1.1 degrees of warming we’ve already experienced, there has been an increase in droughts and storms, effects we were supposed to see at higher temperatures. So it’s possible that we have been underestimating the danger of each temperature increase. There’s also the cost: In 2011, the National Roundtable on the Environment and Economy estimated that climate change could cost Canada anywhere between $21 and $43 billion per year by 2050, and we are not especially vulnerable.

While there are many reasons to be skeptical of a possible agreement—the legal status, the amounts pledged—it is also clear that mitigating and adapting to climate change requires a global strategy. It’s the kind of problem the UN was created to solve.