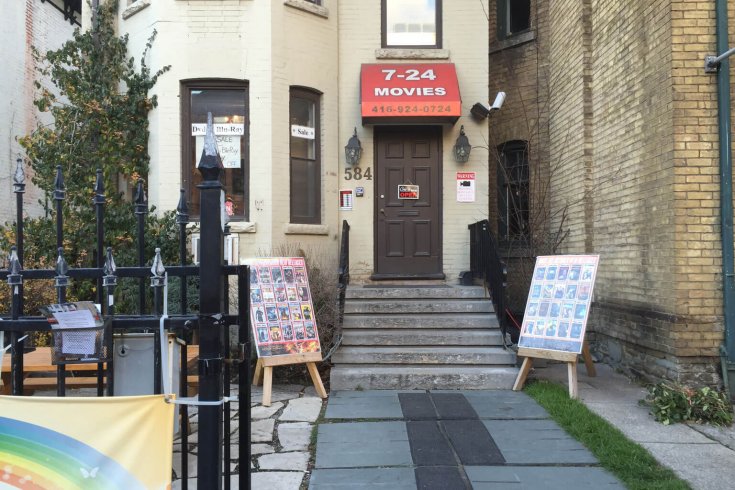 Walking through Toronto’s gay village, I pass by 7-24 Movies without a second glance. The store, coddled between a now-defunct corner-lot restaurant and a crumbling three-storey apartment building, is easily overlooked. The disinterest of passersby like me is not for the owner’s lack of trying: a bright red sign above the door, accented with bold white lettering, should beckon customers. But 7-24 is a video rental shop, and the year is 2015.

One chilly November morning, I choose not to bypass the store. Inside, I meet owner Felix Xiang, who has made his living here for the past seven years. The shop has its unpleasantries: the discomforting cold (the thermostat reads fourteen degrees), the dirty red racks that were perhaps purchased at a Target Canada exit sale, the shoddily handwritten construction-paper sign denoting a return box. But I am gobsmacked by the selection, the hundreds upon hundreds of movies that are stacked, row by row, wall to wall. To any film buff, these 150 square metres are a goldmine. They are like Netflix on near-infinite scroll.

LGBTQ films are the first I see, a no-brainer given the shop’s proximity to queer clubs and community centres. The store boasts one of Canada’s largest collections of LGBTQ movies; I suspect Xiang is the only proprietor in the country to rent Oy Vey! My Son Is Gay! Along the wall adjacent to the door are new releases, straight from the theatre. Jurassic World is a big hit this week, Xiang tells me. “You usually can’t watch 3D from the Internet,” he states matter-of-factly. Then there are the foreign films, the independent films, the films so obscure not even Google knows what they are. Xiang smirks: These are the rentals that keep him afloat—the ones that Netflix and rival services do not stream, that movie lovers can’t get anywhere else. “Different stores, different styles,” he says as I peer around the room.

These days, video rental shops are rarely talked about without an air of nostalgia. But the industry is still bustling. With more than 600 stores like 7-24 across the country generating hundreds of millions of dollars in revenue, the rental store down the street is not a cultural anomaly. Rather, it’s alive and thriving.

Oxymorons seem to surround 7-24. For one, it bears a misnomer in that reverses the 24/7 cliché. Xiang doesn’t know where the name came from; I assume it was the original owner’s futile attempt to stand out in a sea of video stores (though it now sounds like the all-familiar 7-Eleven chain). For another, Xiang hates movies. “After being in here all day, they all seem the same,” he tells me. “You know the beginning, you know the end.”

Xiang never planned to work in the movie rental business. The fifty-seven-year-old immigrated to Canada from China in 1985 to attend school in Halifax, his sights set on becoming an electrical engineer. That dream fell flat when his uncle asked him to work at his medical centre in New York. Xiang made the move. He eventually married and had three children, all of who settled in Buffalo. In 2008, he learned that a friend in Toronto, the former owner of 7-24, was about to retire and needed someone to pass the business on to. Xiang seemed capable. He left the medical centre—renting films could be a good change of scenery. Sure, he thought. This seems promising.

When Xiang took over, 7-24 was located at Church and Wellesley, an intersection at the heart of the Village that’s just south of the store’s current whereabouts. Its history is murky: No one, it seems, can pinpoint when the shop opened, its ownership changing hands too often to keep track. What’s clear is that the store flourished for twenty years, a fixture in the neighbourhood known for its vast catalogue of more than 35,000 films. Patrons would often rub shoulders with heads of universities, celebrities, and politicians, all enamoured by the store’s collection. Eighteen months ago, it moved north toward Gloucester into a smaller and quieter space. (A second location, in the Queen West neighbourhood, also remains open, though Xiang is not affiliated with the owners.)

These days, 7-24 is a family business: Xiang’s sister, Lee Hoag, sweeps the floors and replaces BluRays and DVDs into their cases behind the counter (the discs are never stored on the racks, for fear of damage or theft). Xiang cleans discs from the return box before handing them off to Hoag. Upstairs, a tea counter has recently settled amongst shelves of rentals; it’s run by Xiang’s cousin. Together, they keep the shop open eleven hours a day, seven days a week—not quite living up to the store’s namesake, but close enough.

While a Tuesday morning may yield some traffic on Netflix—those playing hooky, kids watching Baby Einstein—7-24 is a dead zone. From the moment Xiang flips over the “closed” sign on the window at 11 a.m., we stand in silence and watch the door. There is brief panic when Hoag notices a lightbulb in the basement has burned out, but Xiang swiftly replaces it and we return to our mutual slouched stance behind the counter.

A half-hour passes; no customers. Then, the squeak of the door. A middle-aged man in a newsboy hat and a parka enters. He walks briskly, as if on a mission. Down the stairs he goes, into the adult section of the store. Xiang and I make conversation until his head pops back up, and he’s at the counter with a case for Dick, a gay adult film. He seems nonchalant about my presence, whipping out his membership card and reciting his phone number loud enough for Hoag, in the back corner of the store, to hear.

One by one, the men trail in. Such is the reality to keep 7-24 afloat. Xiang shrugs. Business is business.

As Daniel Herbert notes in his oral history of the movie store, Videoland, about 100 million Americans rented a film at least once in 1996; the North American industry was worth billions. Just one year later, Netflix would embark on its humble journey, beginning as a mail-in video rental service that would revolutionize the industry by eliminating late fees.

Rentals have since lost their lustre. As researchers from the firm IBISWorld indicate, the industry is now in a state of contraction. Each year, profits dwindle. The constant threat of more accessible technologies looms. In light of these declines, the industry’s major players have made a quick exit: Blockbuster flopped out of business in 2011, Rogers in 2012, and rental kiosk company Redbox in 2015. This paved the way for independent businesses. “Smaller mom-and-pop shops have fostered a more niche and local environment to attract and retain customers,” the researchers wrote in a 2015 report. These shops, now numbered in the hundreds, accumulated more than $430 million in gross revenue this year alone.

Independent businesses have also maintained the video store’s status as an important cultural institution—one that is still hanging on for life. Like record stores preserve the music of a finer age, so too does the video shop protect film. “The shelves and aisles function as both an archive and museum,” Herbert writes. Within the walls of 7-24, for instance, LGBTQ films of past decades sit patiently, awaiting another play.

Perhaps even more important is the role these shops play in preservation of function. To pony up $4 and rent a DVD is to revert to a now-antiquated method of indulgence. It is to go against the stream, to negate the Internet’s draw of quick, easy, and affordable entertainment. As one 7-24 employee tells me, those who rent from the store are not often part of the plugged-in generation, but are those who “cling to the physical form, to the store, to the DVDs.”

Xiang may not care for film, but he too is cognizant of the store’s cultural function. “We’re run on regulars. People who don’t want to go on the Internet. People who want to come in every day to see what we have,” he tells me. “I field ten to twenty calls every day asking about our collection. People want a place to come to. Here we are.”

Wednesday evenings at 7-24 prove to be more prosperous. I’m standing by the cash at 5:30 p.m., and the familiar squeak of the door sounds every few minutes. These are peak hours, I’m told, and through the night, fifty or so clients are expected to come in and out of the store.

The employee I spend this evening with tells me it is his last week at work, a bittersweet departure. Though he loves the job, the industry is in decline, and it seems like the right time to move on. Ironically, a few customers interrupt before he can finish the thought. Business may not be booming, but it’s still chugging along.

Xiang also expresses an uneasiness about the future. The shop could be closed by 2017, he muses. Alternatively, it could remain a staple in the Village, as it has for decades. Uncertainty, like the oxymoron, appears deeply embedded in 7-24’s story.

When I exit the shop that evening, I peek back at the nondescript building, that red sign now muted by autumn’s dark. I suspect I’ll be unable to pass by it again without Xiang’s voice ringing in my ears: “Here we are.”

Erica is a senior editor at Xtra Magazine 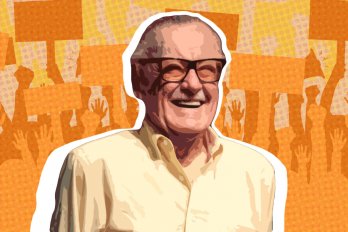