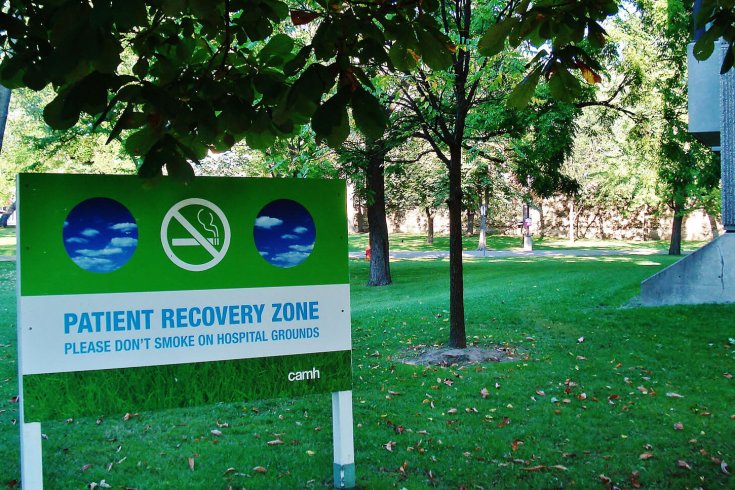 The Centre for Addiction and Mental Health in Toronto.

In September, a forensic-psychiatry patient at Toronto’s Centre for Addiction and Mental Health absconded during a scheduled outing. Thomas Brailsford had been found not criminally responsible for cutting off his mother’s head in 2010, so the news of his escape created, to put it mildly, some apprehension among the public.

During the twenty-four hours or so Brailsford was on the loose, media sensationalizing transformed Toronto into a modern-day Sleepy Hollow, with panicked Ichabod Cranes trying to evade a ghoulish headhunter. Quite naturally, many people wondered why Brailsford was left in a position where he could so easily vanish—it was the second time he’d gone AWOL from the centre within twelve months.

In the decade I worked at CAMH and its predecessor, the Queen Street Mental Health Centre, up until 2004, I saw some of the workings and causes of this type of dilemma. It was a period that saw controversy and conflict over the opening of CAMH’s Medium Secure Forensic Units, which house, in the middle of a crowded downtown neighbourhood, people who have committed horrifying acts upon their fellow humans.

Whenever a forensic-psychiatry patient at CAMH or elsewhere doesn’t return from an approved outing, senior staff are sent into a scramble. Managers are placed in the unenviable position of having to protect the patient’s privacy while trying to reassure the community of its safety. It’s a task made all the more difficult when media and police stoke public fears by highlighting the appalling reasons the escapee was locked up in the first place.

Take the case of George May. Within two weeks of Brailsford’s attempt at freedom, May, a man with paranoid schizophrenia, didn’t return to the Ontario Shores Mental Health Centre in Whitby, Ontario. He had privileges to leave the facility, but media headlines cited his “long history of violence” and called him a “killer psych patient.” In 2001, May strangled a woman to death and was found not criminally responsible. Like Brailsford, it wasn’t the first time he’d fled; in 2012, he briefly went missing from CAMH.

What’s often forgotten, or overlooked, is that the goals of forensic psychiatry, which deals with people who were deemed “criminally insane” in times past, are very different than those of the prison system. Both the criminal justice and forensic-psychiatry systems confine people who’ve committed crimes in order to protect the public. But that’s the only similarity. Prisoners have defined sentences; forensic patients are treated until they are no longer deemed a threat to the public.

While punishment is a major factor in the imprisonment of convicted criminals, treatment and reintegration into society are the goals of forensic-psychiatry centres. For reintegration to be effective, it has to be done gradually. This means that forensic-psychiatry patients eventually have to be let out on day passes, first with supervision and eventually without. These incremental increases in their privileges only occur when psychiatrists are confident that they come with minimal risk to the public. It’s not only public safety and the patient’s welfare that concern medical staff. The psychiatrist’s own reputation, and that of the institution, are both on the line. It looks bad for everyone when a killer or a rapist considered trustworthy enough to be let out on a day pass goes missing.

But what makes the perception of medical irresponsibility unfair is that psychiatrists are mandated to put patients like May and Brailsford in a position where they can abuse trust. Casuistic crime reporters may frighten us with tales of rampaging maniacs, but in countless cases we never hear about, those boundaries of trust are honoured. Despite the occasional panic over a missing patient, the peaceful end result of these episodes is, in a way, an ironic testament to the efficacy of their treatment. Just as in the cases of Brailsford and May, every such walkabout I know of ended with no violence, a big sigh of relief, and the patient’s return to hospital.

Obviously, these sorts of occurrences need to be discouraged and prevented, but the melodramatic fear-mongering that accompanies them is unfounded. The general public actually faces very little risk. As disturbing and inexplicable as it sounds, when the severely mentally ill commit acts of horrific violence, such as dismemberment, they are most often directed at the people they love, rather than strangers.

Of course, there are rare exceptions. By far the most notable, forever vivid in the Canadian public’s mind, is the 2008 beheading and cannibalization of Tim McLean on a Greyhound bus travelling through Manitoba. Vince Li, a man unknown to the victim, was found not criminally responsible for McLean’s death. Li was diagnosed with schizophrenia, and later said he believed McLean was an alien and that voices had told Li to kill him. When Li was granted unsupervised day trips from the Selkirk Mental Health Centre in 2014, public uproar ensued. But doctors have said Li has responded well to treatment, and believe he is at a low risk of reoffending. There’s been no news of any violence Li has committed since the grisly attack.

The term Catch-22, from Joseph Heller’s novel of the same name, partially explains why forensic-psychiatry patients on the road to recovery sometimes get the urge to go AWOL. In Heller’s book, he describes how a shell-shocked Air Force captain can theoretically stop flying dangerous missions if he claims to be mentally unfit. But in practice, the claim would be denied because someone so cognizant of his condition is clearly mentally fit enough to continue.

The Catch-22 we often see played out in forensic psychiatry is that many severely mentally ill patients who have responded well to treatment fail to appreciate the reason they have come to feel “normal”—the medication they’re taking. So, believing that they’re better, they feel they should have the same rights to freedom as other people. After gaining enough trust from staff, when the opportunity arises, they might take that freedom without permission and use it for things they’ve been denied, such as an evening stroll.

In order to encourage people who need psychiatric help to get sufficient treatment, mental health professionals and advocates have been working hard to remove stigmas from mental illness. But to be convincing, it’s not always helpful to try to banish stigma from all manifestations of madness.

On the spectrum of mental illness, there’s a qualitative difference between someone with depression and someone who decapitates a Greyhound bus passenger. If our mental-health advocates want to be credible, it’s important for them to make those not-so-subtle distinctions. Indeed, most psychiatrists do and, when describing patients in private conversation, are even known to sometimes use the impolitic word “crazy.” Whenever possible, we want people to seek out treatment before they reach that stage. But there are the professional, strident activists and advocates within the mental-health industry, both among the pro- and the anti-psychiatry camps, for whom any suggestion of a gulf between the mentally ill and mentally healthy is a sacrilege.

I remember a quiet young woman from my time working at the centre. If she were sitting next to you on the subway, you’d never imagine she was a veritable Lizzie Borden out on a day pass. Years earlier, acting on instructions from voices she heard coming from a piece of furniture in her family home, she picked up an axe and tried to hack her parents to death while they slept. Following care and treatment, she hasn’t committed an act of violence since. That sort of success points to the commitment psychiatrists have to their profession.

Many people experience mental illness and never commit violence, whereas prisons are filled with vicious criminals who are completely mentally responsible for their crimes. Many people who are not considered mentally ill pose a far greater risk to the public than those who have received a diagnosis and treatment for their mental health issues.

With some balance and perspective, the public might find reassurance learning that, rather than allowing insane criminals to roam the streets, psychiatry is helping many people who need it, while making the community safer for everyone.

Richard Klagsbrun has written for the National Post, was a co-founder of the innovative social media technology company View2gether, and was a Creative and Strategic Planning Executive at Participant Productions in Beverly Hills.