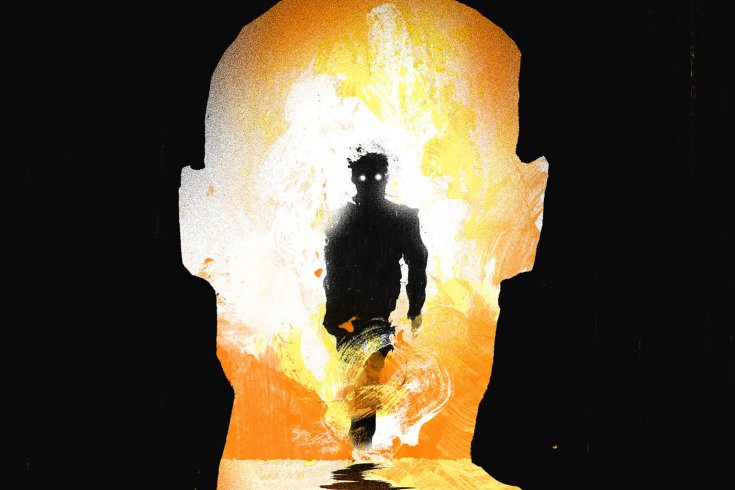 I stop at a light, waiting to turn left. I’ve just come from a visit with my therapist. Nothing resolved, just the familiar uneasiness that comes from working with deeply buried memories. For the past eight years, I’ve undergone regular “psycho sessions” for post-traumatic stress disorder from my time in Sarajevo as a UN military observer in 1995. Finishing at 4:30 p.m. usually puts me in the middle of Fredericton rush hour.

As I watch for the green, I notice a father and his son crossing the street. From the boy’s wobbly gait, I figure he’s about two. He’s wearing a sky-blue toque, red mittens, and knee-high snow boots. When the pair makes it across, my light changes, and I turn. I am next to them now, and I take one more look. Then everything slips ­into slow motion as the toddler turns toward me. His face is a picture of innocence, his eyes are dark, and in them I imagine a look of fear. It was a look I had seen a hundred times in Bosnia, and it triggers memories I thought I had under control.

I feel a rush of adrenaline: my breathing grows short, my grip on the steering wheel tightens, my vision draws in—everything is grey. I am heading toward a full-blown flashback.

As if possessed, I begin yelling, “Don’t let it get you, don’t let it get you, you’re in Fredericton, not in Bosnia, the kid is okay, your grandkids are okay, you’re in Canada, you are going home to supper. It’s okay, Fred; it’s okay.” An overwhelming rush of grief comes over me, and my eyes start to tear up as I imagine what it would be like to lose a child. “Breathe,” I say out loud. It’s working. My grip loosens and my vision widens as I make my way home. I stop at our mailbox, get out, and gulp in air as if I were drowning.

These episodes—which, thankfully, don’t occur often—drain me physically and mentally. I am glad no one is home. I get a cold drink, sit in my chair, and let the stress and tension drain out.

Post-traumatic stress disorder has gone by many names in the past. It’s been called soldier’s heart, combat stress, battle fatigue. They are all the same: invisible wounds.

The modern understanding of PTSD began during World War I, when the ­brutality of war was brought to an industrial level. At first, most doctors thought it was a physical ailment brought on by exploding shells. Front-line medical officers didn’t know what to do with shell-shocked soldiers. The worst cases were sent to treatment centres. The rest weren’t so lucky. The cry from the leadership—safe from the horror of the trenches and skeptical about the legitimacy of shell shock as an illness—was Get them back into the line!

As World War II began, military officers in some units ignored the advice of psychiatrists, insisting that “exhaustion”—as PTSD was often called then—would not lead to significant harm. However, the numbers told a different story. Between July 21 and August 30, 1944, 3,000 Canadians were killed and 7,000 wounded; more than 1,500 soldiers suffering from exhaustion were sent back from the front. After World War II, many veterans ended up addicted to alcohol and drugs.

My father and several uncles served during World War II, but they rarely talked about their time overseas except to share humorous anecdotes. When they got together for a few beers, I’d hang around, listen to their stories, and laugh along. Most times, I didn’t know what I was laughing at; it just seemed like the thing to do.

There were times, though, when someone would say something and they would all become silent, lost in some collective memory. The trance usually lasted seconds and was broken by the unconscious raising of a beer. They always looked a bit embarrassed after zoning out. They’d recover by saying things like “Yeah, yeah, and a nice fellow. Too bad. He didn’t make it; I miss him.” Then with a pull on their beers, they would be back in safer territory.

Over time, I came to understand why the booze flowed like water with my dad’s generation: it was medicine. The legion halls all over the country were full of men who wanted to forget. Getting pissed with your mates shrouded the guilt of having survived.

In 1956, we moved from Amherst, Nova Scotia, to Montreal, and my dad got a job at Reliable Steel, a scrapyard on St. Patrick Street in Pointe-Saint-Charles. We lived in the flat above its office. Right across the street was a rail yard, separated from a lumberyard and the Lachine Canal by a small wooded strip of land. That small strip is where we fought the French kids—the rail yard, woods, lumberyard, and canal were all on the French side of the Pointe. The fights were for possession of that strip of shrubbery, the best place to hang out.

One midsummer night, three of us decided to go and watch the canal boats from the top of a lumber pile. I had seen “man nests” before amongst the low brush in the woods—a piece of cardboard laid out on the ground, the remnants of a small fire, and empty bottles strewn about. But I had never seen anyone around them.

We were ducking through the woods when we heard someone yell, “Fuck off, you little fuckers!” Knowing it was meant for us, we went to ground on top of a lumber pile, but, being kids, we could not resist checking out who was down there.

There were three men sitting around a small fire, dressed in old army greatcoats, bundled up like they were expecting it to snow. They were talking, but we couldn’t hear what they were saying. One of the men was clutching a bottle.

“You know—guys that drink rubbing alcohol.”

A couple of months later, as I was walking along St. Patrick Street, I noticed a rubbie pushing a small handcart made from a wooden shipping crate and two baby-carriage wheels. He wore no hat; his hair was dark, dirty, long, and so greasy it shone. He wore an old army coat that went down well below his knees. The coat was tied around his waist with a piece of baler twine. He walked fast, his loose boots clomping with each step, and every few steps he’d look to his left, right, and behind as if looking for someone or something.

I kept my distance but followed him around the corner onto Ropery Street, where he turned in to the huge open gate of a scrapyard. The scrap was weighed; he got a couple of bucks for it. ­Without even looking at the money, the ­rubbie stuffed it into his pocket, turned, and left.

I turned, too, and carried on to my friend’s house. When I got there, we sat on the stoop and whiled away the morning. At one point, our gabbing settled on the subject of the rubbies, and I told him about the one I had seen at the scrapyard that morning.

My friend’s mom was sitting in the ­kitchen just down the hall from us, puffing on a rollie and sipping a cup of tea. She must have overheard us. She got up from the table and joined us on the stoop, her ever-present cigarette dangling from the corner of her mouth. “I’ll tell you who those men are.”

She surprised me when she said they were soldiers.

Why are they sick?

“The Second World War, and they saw and did things that no man should see or do.” She paused, took another drag on her smoke, exhaled, and said angrily, “Even though the war has been over for fifteen years, they still can’t forget what they saw and did.”

War? We won the war, so why are they sick?

“Never mind. You’ll learn more when you grow up. Just remember these fellows gave everything so we can live and be safe today.”

I asked her why they drank rubbing alcohol. “It’s cheaper than store-bought booze, and it’s a lot stronger.”

But why do they drink?

She didn’t answer as she took a drag from her cigarette, took it out of her mouth, held it between her nicotine-stained fingers, and took a sip of her tea. Finally, with a faraway look suggesting memories that still hit too close to home, she said, “To forget to forget.”

Excerpted from Better off Dead, (Nimbus, 2015), by Fred Doucette.

Fred Doucette is the author of Better off Dead, a memoir published in 2015.
Daniel Zender

Daniel Zender (@daniel_zender) has appeared in McSweeney's and Nautilus.