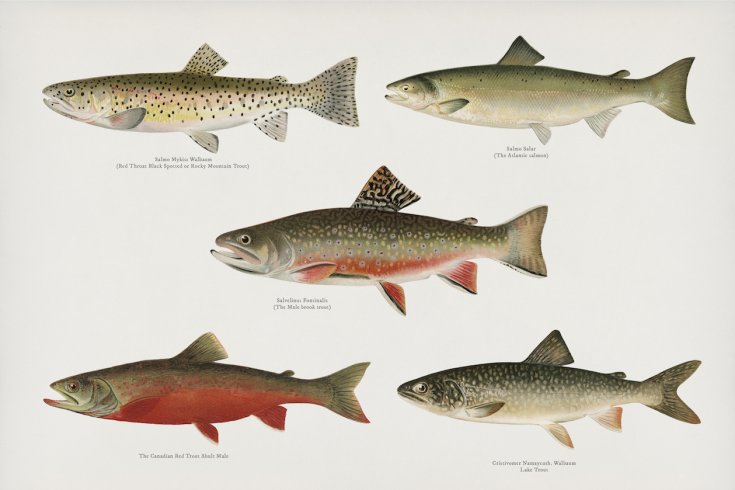 Between April and June, Canadians participated in an unprecedented experiment: supermarket shoppers bought about five tonnes of genetically engineered (GE) Atlantic salmon, making it the first transgenic animal approved and sold for human consumption anywhere in the world. What’s notable, beyond the precedent, is that none of the shoppers knew they were buying it.

The fish sold in this first pilot sale was the AquaBounty AquAdvantage Atlantic salmon—a GE fish that grows to market size in half the time as conventionally farmed salmon. Developed at Newfoundland’s Memorial University in the early 1990s, the fish combines a growth hormone gene from a Chinook salmon with a regulatory switch from another fish, enabling the salmon to produce growth hormones all the time.

It has taken twenty years for this fish to be approved for human consumption in both the United States and Canada, but complications over disclosure rules for GE animals are keeping the fish out of American stores for now. This has not been the case in Canada, where Health Canada does not require the GE fish—sold mostly as filets to restaurants and supermarkets—to be labelled in any way.

Decades after GE plants such as canola were introduced and became a staple of the North American food supply, GE animals are now poised to enter our lives. But whether people will knowingly buy and eat a genetically engineered fish, let alone stomach the risk of environmental impacts that may come with their proliferation, remains to be seen.

In 2014, seventy-six environmental and activist groups, including the David Suzuki Foundation and Greenpeace Canada, signed an open letter demanding that the Canadian government reject the regulatory approval of GE fish for human consumption. They cited a need to strengthen environmental risk assessment of genetically modified food technology to make sure it was safe and wanted “mandatory labelling of all GM foods in the grocery store.” They weren’t successful.

Less than a year later, an Ipsos-Reid poll conducted on behalf of the Canadian Biotechnology Action Network (CBAN) found nearly 90 percent of Canadians wanted mandatory labelling of GM foods, and about 60 percent opposed genetic modification of crops and animals. Almost half supported a ban on genetically modified food altogether.

As the polling showed, not all Canadians trust GE food, but companies are pushing ahead regardless. In most cases, it’s the bottom line that drives such innovation forward: a GE canola plant can be developed to tolerate repeated herbicide applications that weeds cannot survive, or a GE fish that looks and tastes identical to normal Atlantic salmon can grow to market size at a fraction of the time, which means they will require less feed and, ultimately, cost less money.

But in addition to buyer squeamishness, there is a prominent environmental concern that GE lifeforms will somehow escape captivity, colonize wild ecosystems, and pass on their altered DNA, thereby rearranging the existing order of life as we know it. The consequences of this are just guesswork, and so the release of GE life forms into the world, some argue, is an unprecedented, uncontrolled lab experiment writ large, where the impacts to wild ecosystems are completely unknowable in advance.

Twenty years ago, this concern prompted Canada’s Department of Fisheries and Oceans to give Robert Devlin, a research scientist with the federal marine ecosystems and aquaculture division, a most unusual assignment. He was tasked with creating his own GE fish and observing how his creations interacted with the simulated wild.

Devlin spent the first decade developing and perfecting his own GE coho salmon—the lab rat of the salmon world—that, like the AquaBounty salmon, were engineered for enhanced growth. He then observed the GE fish interacting with wild fish in massive tanks designed to imitate real life, including fresh-water spawning streams and “mesocosms” holding 1 million litres of ocean water.

Devlin found that interactions between GE and wild fish were often influenced by their environment: for example, GE fish typically outcompeted wild fish for food in smaller tanks but were awarded for this aggression in larger, more realistic oceanic environments by getting picked off by predators more often. Two important details became clear, however: GE fish readily breed with wild fish and transmit their genes to future generations, and Devlin’s efforts to sterilize GE fish were never 100 percent successful. So if GE fish do accidentally escape, it’s possible that they could adapt and ultimately displace the current wild species.

In the face of these observations, Devlin recommended to his political masters that GE salmon be grown on land, not in open-net pens in the ocean (which is a practice virtually all salmon farms employ today). And now that the fish have been approved by government, he has another suggestion: government needs to play an active role inspecting the facilities to ensure that human error and the growing scale of operations do not create the potential for accidental escapes.

AquaBounty spokesman Dave Conley says the decision to raise the fish on land was a condition of approval in both the US and Canada. (The next steps for the company are to establish two new land-based facilities in Prince Edward Island and the US; both are awaiting approval.) Conley also noted that the company’s salmon averaged 99.8 percent sterility in data submitted to Health Canada and the FDA and now “routinely achieve” 100 percent sterility.

At first glance, AquaBounty’s vision of GE salmon farming actually addresses many of the environmental issues that dog the conventional fish farming industry. For one thing, environmentalists have been calling on conventional salmon farmers to move their fish onto land for many years, as this negates the escapes, disease, pest transfer, and pollution associated with situating open net pens in the ocean. (In August, for example, thousands of Atlantic salmon escaped from a damaged fish farm into the Pacific waters near Washington‐where they are an invasive species—and scientists are now waiting to see the consequences to the ecosystem and to the wild Pacific salmon.) The fast growth of AquaBounty fish also means that they require up to 25 percent less feed to grow to maturity. This not only reduces the amount of wild fish farmers must feed its salmon but also means the farmers can, theoretically, produce healthy protein for consumers at a significantly lower cost.

In spite of these advantages, the association representing Canada’s biggest salmon farmers on the west and east coasts doesn’t want anything to do with GE fish. “We do not need, nor do we intend to employ, GM salmon technology in Canada,” wrote Tim Kennedy, director of the Canadian Aquaculture Industry Alliance Executive in an email. There is already huge domestic and global demand for conventionally farmed Atlantic salmon, he said. Instead of looking to GE salmon, they are now planning to expand farm sites and improve existing conventional breeding programs.

This response makes a lot of sense to Lucy Sharratt, coordinator of CBAN, which is a coalition of environmentalist, food security, and farm groups that have followed and opposed the commercialization of GE fish for decades. Sharratt says that, in places like British Colombia, the conventional salmon farming industry is already under fire for many environmental issues—the last thing they need is to introduce a GE salmon that customers may reject.

Sharratt sees comparisons between the current situation with salmon farmers and a little-known episode in Canadian history. Before AquaBounty salmon, there was the Enviropig, created in 1999 by researchers at the University of Guelph. It was a pig designed to produce less phosphorous in its feces by combining genetic material from E. coli bacteria and mouse DNA, which promised to reduce the environmental pollution from industrial-scale hog farms.

The pig had even been approved for production in Canada, but by 2012, the project was official-ly dead. According to David Hobson, University of Guelph’s manager of technology transfer who oversaw Enviropig commercialization efforts, the university could not find a commercial partner willing to invest the dollars and time required to bring the pig to market. He recalls a lot of fear about any kind of genetic alteration at the time, particularly among pork producers who were worried that selling GE pigs would taint their brands. “We had to stop, because we can’t keep a barn full of genetically engineered pigs around just for the fun of it,” he says.

A similar risk of turning off partners and consumers follows GE salmon, says Sharratt. In November, CBAN reported that it had received assurances from national retailers Sobeys, Loblaw, and Metro—which represent more than 50 percent of the Canadian food-retail market—that they have no plans to sell GE salmon. Walmart, Costco, Whole Foods, and nearly eighty other US retailers have made similar pledges.

Enacting mandatory labelling so consumers know what they are eating remains the hottest issue for those against GE salmon in stores. “Now that some genetically engineered salmon is being sold in Canada unlabelled,” says Sharratt, “it is vital that consumers have this information from their grocery stores.”

Devlin, the scientist who has spent more time investigating the unknowns of GE fish than perhaps anyone else, says it’s not certain that the public will accept GE salmon. But he also says the proliferation of GE animals seems inevitable. To date, there are more than thirty-five species of fish that have been genetically engineered for various traits, he says, and right now, at least fifty labs in the world are working to engineer fish that can be safely contained in open net pens in the ocean. “This technology is coming, and we in Canada are just the first.”