Stop Telling Women What to Wear | The Walrus
Skip to content 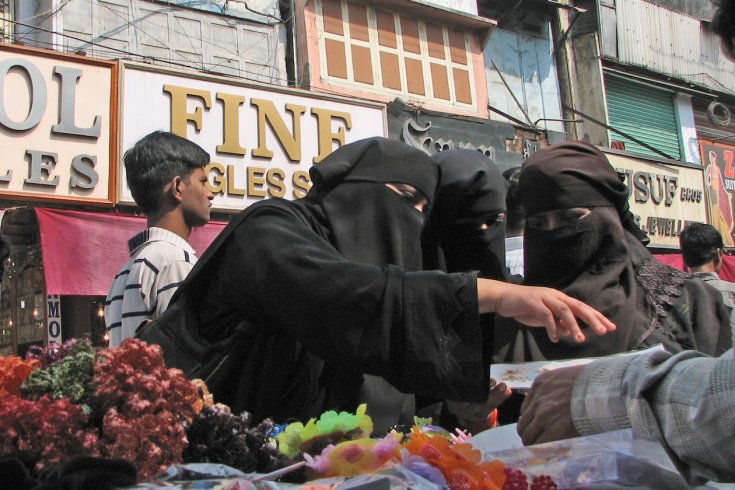 When I was in elementary school in Vancouver, the female students went on strike. We arrived early in the morning and stood outside on the tetherball courts by the back doors, braved the cold damp rain, and huddled together for a common cause: we wanted to be able to wear pants to school.

The very grown-up and savvy grade seven girls led us in chants. A few of them had previously met with the principal to make the case. What had ensued was a heated debate about the raucous bad behaviour that might occur if girls were allowed to wear trousers and the threats to civility and decorum that trouser-wearing might unleash. When the principal refused the request, the grade seven females decided to launch a revolution.

We chilled, quite literally, until noon, when the principal emerged in his black suit, crisp white shirt, and red tie to announce that we would from then on be allowed to wear proper trousers to school. Jeans, however, were still forbidden. It didn’t matter. We had won.

About twenty years later, I was hired at one of the world’s largest consulting companies. During my first week of work, I was told that wearing pantyhose was required, even in the heat of summer. My senior female partner also made it clear that if I was interested in climbing the corporate rungs of success, I ought never to wear trousers. Even in my adult life, trousers haunted me as forbidden attire.

At home, there were different clothing rules. Growing up in a feminist household, I was not allowed to wear a bra. It was the symbol of oppressive patriarchy, my family insisted, and forced women to conform to male-defined standards of attractiveness. Resisting the patriarchy, however, became quite uncomfortable as I matured and became a moderately active athlete. I rebelled at the age of fifteen and purchased a bra while on holiday with my boyfriend and his family. When I returned home, I was critiqued and shamed. Nonetheless, I wore my new, lacy, slightly sexy underwire bra not only when playing baseball, hockey, and soccer but also to school. I continued to be ridiculed at home. But at least at school I overcame the nickname I had acquired—Bounce.

What women wear is political. Clothing is a language that defines our identities and the roles we play. As both the writers and the wearers, we create the landscape of social norms, beauty, and civility—and are shaped by it.

About a month ago, I shared a stage with Aima Warriach, a niqabi woman (her term) who wears, and advocates for the right to wear, the niqab. Banned in France in public places, including movie theatres, and now banned in Quebec in public places (although Bill 62 is being challenged), this piece of cloth covers a woman’s face, revealing only her eyes.

As president of the Mosaic Institute, a charitable organization advocating for Canada’s diverse communities, I was participating in a panel discussion on the debate around the niqab. Aima, a fellow panellist, shared an anecdote that I found particularly striking. When she is on the subway and the seat beside her is empty, it stays empty. If she places her bag on the unoccupied seat, people will ask her to move the bag. People are irritated at a breach of transit etiquette—but they are more wary of sitting next to a niqab. What is it about a piece of cloth that is so offensive?

The niqab disturbs and distresses. The passing of Bill 62 in Quebec has been justified by legal considerations: some argue there are situations in which seeing another’s face is required—in a courtroom where a defendant has the legal right to address their accuser, when travelling across borders, when applying for official identification. But in each of these situations, there are easy and humane workarounds, such as private rooms where female agents can officiate. That level of accommodation is entirely comparable with requesting a woman security guard for a pat-down at the airport.

Others worry that women are forced to wear the niqab, and that wearing it silences them. This past March, Qanta Ahmed, a British Muslim woman, wrote in the Spectator that the veil, when mandatory, is a “kind of oppression.” The underlying presumption is that women would never willingly wear the niqab and that it is an imposition forced upon them by controlling men. While that may well be the case in some instances, the niqab falls into the same category of self-selected clothing as high heels. Why would any woman voluntarily wear them?

Protecting women’s rights and freedoms is a legitimate concern. But our society often fails when it comes to creating paths for women to be in control of their own lives. The Canadian Women’s Foundation notes that every six days, a woman in Canada is killed by her intimate partner. That is a reality we absolutely need to address, as it is about women’s lives, not their clothing. Niqabi women may be oppressed or even living in dangerous circumstances, but the niqab is not proof that they are.

Some have argued that dangerous women can hide behind the niqab and commit heinous acts. It is interesting to note that even ISIS is confused on how to manage the niqab. They typically punish (even execute) women who do not wear the full burka, but in 2016, they banned the wearing of the veil in Mosul after two high-ranking commanders were killed by a veiled woman. Is banning a piece of clothing really an effective anti-terror tactic? If Canadians support the type of legislation that polices clothing as way of protecting society, we are becoming the kind of oppressive society we would normally condemn.

For many, opposition to the niqab is harder to pinpoint: we are disturbed when we cannot see someone’s face. In some contexts, we can manage—think of doctors and patients in facemasks; think of balaclavas and thick scarves during chilly Canadian winters. But when it comes to daily attire, the niqab feels incongruous in a society that claims to value and cherish face-to-face human contact.

Perhaps this level of discomfort is part of a longer story of reducing the complexity of our social fears, apprehensions, and anxieties to the character of Woman. When societies have grappled with change, they have typically talked about it in female terms. Think of the eighteenth-century discourse that tried to understand the mechanisms of early capitalism and explain the fluctuating nascent stock exchange. Fortune was a woman: one moment she would bestow you with wealth, while the next minute she would abandon you to penury. Think of the politically disruptive sexual revolution of the sixties, caused because women were not only taking birth control pills and demanding rights but were also wearing miniskirts. Hoisting all our concerns about unpredictable terror, about the growth of multicultural communities, and the displacement of Anglo-Saxon hegemony onto the clothing of women is, sadly, predictable.

Society’s discomfort with the niqab might be comparable with my father being opposed to eyeliner or me not trusting men who wear tasselled shoes. Our distress reveals deeper prejudices and prejudgments, when really these are matters of personal taste and ought never to be the source of public shaming or policing. They represent a form of discomfort we can all get over. We did with trousers. We did with miniskirts.

We hold fast to the idea that we choose our clothing. But what we wear is determined by the fashion industry, social habits, community, function, cultural notions of propriety, and decency. Do I opt for function over aesthetics? Do I opt for the high heels and a tight skirt because it is my choice or because of the pressure to be seen as sexy? And when I do select my clothing, is it to identify as a member of a particular group or to be respected as the social person I aspire to be? Then there’s the fundamental question of how revealing we allow our clothes to be. Should girls be allowed to wear crop tops to school? Should niqabi women be forced to show their faces? Clothing is a language of the self and of the group. The irony is that while it is a language of self-expression, it also limits us.

Clothing does not reveal the interior richness and depth of an individual. When we allow it to wield the power of social definition, we become obsessed with appearances at the expense of developing who we are as individuals and communities. If there is something we ought to fight for, it is that we move beyond the power of the superficial.

Equally important is that policing clothing will never be the solution to complex social and political issues. The niqab is the plastic bag of social sustainability. Where the plastic bag has become the sign of environmental degradation, banning it is considered the solution. Comparably, the niqab is considered a symbol of social extremism, and banning it is seen as the solution. We are fools if we believe that eliminating a piece of cloth will really solve the problems that generate social extremism.

If we are actually uncomfortable with the niqab because we believe it threatens the openness of our culture, then we ought to respond with openness to combat it. Aima, my fellow panellist, put it simply: Talk to her. Ask her questions. Get to know her. Do not make presumptions about what type of person she is because of what she is wearing. Responding with tactics of repression only reduces us to the very threat we want to silence.

This text is adapted from “The Niqab in Canada: Now What?” a panel discussion hosted by the Mosaic Institute and Raja Khouri Conversations on November 27, 2017.

Pamela Divinsky is the executive director of the Mosaic Institute and founder of the Divinsky Group.