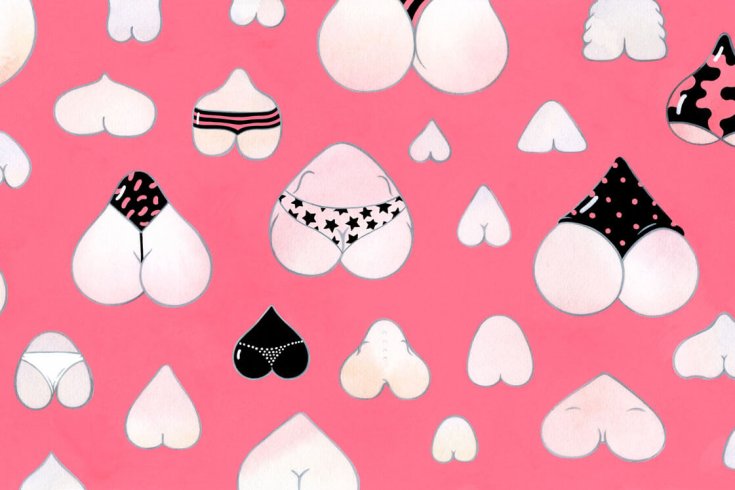 I fight hard to keep the tension out of my voice when I call my boyfriend to tell him I’m going to be home late again.

“I’m sorry, sweetie. Just eat without me; I’ll grab something when I’m home in a bit.”

“They dump something on you again?”

“I have to relabel all these asses. It’s going to take a thousand years.”

With less than an hour left in the workday, my boss opened his office door and spewed stress all over everyone in the content-creation department, located on the main floor of a squat office building in downtown Toronto. Grey carpet and beige walls, banks of cubicles on the lower floors and big offices with big windows for the executives above: this could be any content farm in the city.

I work in search-engine optimization. My job is to help people find the porn they want and, in the process, funnel traffic toward my company’s websites. Our tagging system and content trees are dense. Within them, an ass is not simply an ass. It may be skinny or thick, juicy or bubble; the sphincter may be tight or gaping, bleached or hairy; insertables of various sizes and configurations may be involved. When it comes to the performers, age, sex, skin colour, size, and hair all enter into play. I try to be as thorough as possible so that our users can find exactly what they need to ignite their brains—a magic combination of gesture and expression, sweat and skin, that just does it for them.

By the time the unlabelled and unheralded asses—3,000 in all—arrive on my desk, the novelty of my job has long since worn off. I quickly get to work, opening each photo at full size in order to accurately categorize the ass depicted therein (shape, size, perceived juiciness), then cross-referencing my descriptions against our master list of tags to make sure my language is precise.

It’s amazing how quickly chatting with colleagues about gangbangs and double penetration can become not just normal but banal—how quickly titillation can turn into numbness. I took the job in January 2011 because I’d been laid off from a teaching position a year prior and, after a series of part-time call-centre stints and a few flailing attempts at freelancing, had decided at the age of twenty-seven that it was time for a steady paycheque.

The job pays barely more than minimum wage, and I share a desk with a young woman—the personal assistant to one of the executives—who microwaves fish every day. Still, it’s a salary. There are benefits. I have an appointment to get my eyes checked and will soon be buying my first new pair of glasses in three years.

But when the big boss, my supervisor’s supervisor, called me into his office one afternoon a few weeks before the rumpy photos turned up, I wondered whether I was going to be fired. Recently, I had been written up for hiding the personal assistant’s BlackBerry in a plastic pumpkin (it was almost Halloween) after she had left the building to run a few errands and abandoned the phone on her desk, ringer at full volume. I listened to the opening notes of Beyoncé’s “Run the World (Girls)” 357 times before cracking. Three months into the job, that summons marked the first time I had ever met my boss. He went by a monosyllabic sobriquet. I’ll call him Bent.

Bent was always a little too neatly groomed, with exquisite eyebrows and hair as pristine as a Ken doll’s. He spoke with conspicuous softness. I once saw him tuck his girlfriend’s puppy away in the bottom drawer of his filing cabinet; when he realized I was watching, he opened the drawer a crack to let some air in. He reminded me of Patrick Bateman. Sometimes I joked about him having a freezer full of torsos in a storage unit somewhere. It wasn’t really a joke.

I had to step over a baby gate to get into his office. It was there to keep the puppy from escaping. The puppy wasn’t there just then, but its toys and pee pads were strewn across the floor. (Bent later told me that fewer people would come into his office when it looked as if the puppy were around, so he’d begun to pretend that it was visiting even when it wasn’t.)

“Stand against the wall.”

I stood against the exposed brick. Bent picked up a camera. On the wall next to me were photos of my co-workers, each taken in the same spot. Beneath every image was a small card containing a name and job description. Bent printed out the photo of me and taped it to the wall. He handed me a card and a marker.

“Write down your name and what you do; that way, I don’t have to keep calling you the Blond with the Small Tits in meetings.”

He looked at me expectantly, as if believing he deserved praise for being such a considerate boss. Over the next few weeks, I noticed that whenever anyone in my department quit or was fired, Bent would go to his wall of photos and Sharpie an X through the face. When Matt saw this and tried to take the crossed-out photos down, Bent barked at him to leave them up.

“Can you tell us why you are leaving?”

It is my exit interview, now three months after the asses inundated my inbox. Two weeks ago, Matt tried to promote me; when he brought me the happy news, I immediately resigned. I was tired of sex with my boyfriend seeming like an extension of my workday and of the way friends would bring up my job at parties to exploit its shock value. But more than that, I hated how poorly our department was run, how underappreciated our writers were, and how difficult it was to get anything done. I hated how it had ended up being just like any other desk job in any other industry.

Sitting here, I consider being honest about everything. I consider mentioning the perpetually damp carpets or the time HR responded to a case of black mould by ordering everyone pizza for lunch. I think about my face on Bent’s wall, about to have a big black X placed through it.

“You don’t pay me enough” is all I can say. I’m careful not to let the door hit my unlabelled ass on the way out.

Natalie Zina Walschots contributes regularly to the Globe and Mail, the National Post, and This magazine.
Alëna Skarina

Alëna Skarina counts among her clients the Globe and Mail, the National Post, and Chatelaine.