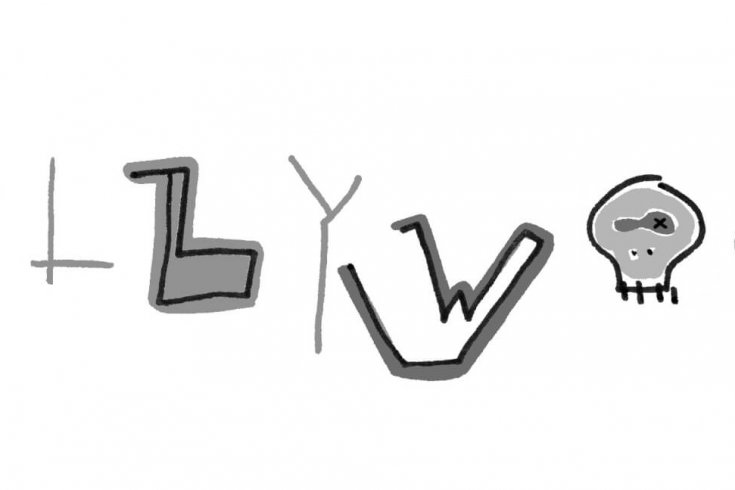 Hollywood Forever Cemetery was the last quiet place in LA. Once.

A hundred people were crowded around a grave. Laying flowers on it, sobbing. An old lady wearing a bandana lifted her arms up.

I got out of there.

Across the street from Hollywood Forever was another cemetery. I’d never noticed it before. There wasn’t a sign or anything.

I walked through the gate.

Nobody had mowed the grass in fifty years, I don’t think.

A woman was on her hands and knees. Ripping out the weeds around a headstone.

She wiped her nose with her hand.

“You never met a gentler kid. You never dreamed of him. When Sweet Jimmy was seven and I was twenty-nine, on my twenty-ninth birthday, he wrapped his ball glove in the funny pages. Just to have something to give. I told him—Jimmy, you don’t have to do that, I’m happy just to have you. But I don’t need it, he said. I’m not ever going to be a ball player. Why do you say that? I asked him. He looked at me funny. Turned his head funny, smiled. Said, Mama, I’m going to be a star.

“And when next month came by and next month and next year, he still wasn’t an astronaut or a cop-to-be. A star. Always.

“The first time I called him, there was something different. In his voice. Something. I wasn’t sure. I thought . . . he was tired, or something. I didn’t say anything. I love you, Jimmy, I told him. Take care of yourself. He laughed. Don’t worry, Mama, he said.

“I packed my bags. Drove out to Hollywood. Three days, it took to get there. 1316 Palm Sway. Number six. No answer. I pressed the button again. No answer. An hour later, I pressed it again. Yeah? said a voice. Jimmy? I said. No, the voice said. Danny. I just moved in. Oh, I said. You . . . know anything about Sweet Jimmy? Never heard of him, he said.

“I drove around Hollywood, all day. Half the night. For days and nights after. The police . . . They were looking too. A few times, my heart jumped up. But it wasn’t Jimmy. It never was Jimmy.

“The Hollywood sign. It’s white teeth. It’s pretty. But it could eat you up.

“You never met anyone so gentle.”

The lady pressed her forehead against the headstone. She kept it there a few minutes. I almost walked away.

“Permethrin. I found that out, after. From the coroner. He’d drunk Permethrin. A whole litre, before. They kill cockroaches with it. Permethrin.

She sat back up. She pulled out a last handful of weeds. She stuffed them into a bag.

“Mary-Anne,” she said, holding out her hand.

It was dirty. I shook it.

I felt dizzy. I felt messed up. I got out of there.

There was only one other person at the bus stop. An older woman. Wearing a bandana.

I sat beside her anyway.

She smiled at me.

I looked at her.

She touched her necklace.

She touched her necklace.

“A young man,” she said. She pointed. “Crossing the street.”

“He’s crossing the street. Walking . . . right through that gate. A woman. She’s waiting. On the other side. She’s—taking his hand. They’re walking along. A young man. A handsome young man. And . . . Marilyn.”

I ran back into the cemetery. I had to tell Mary-Anne.