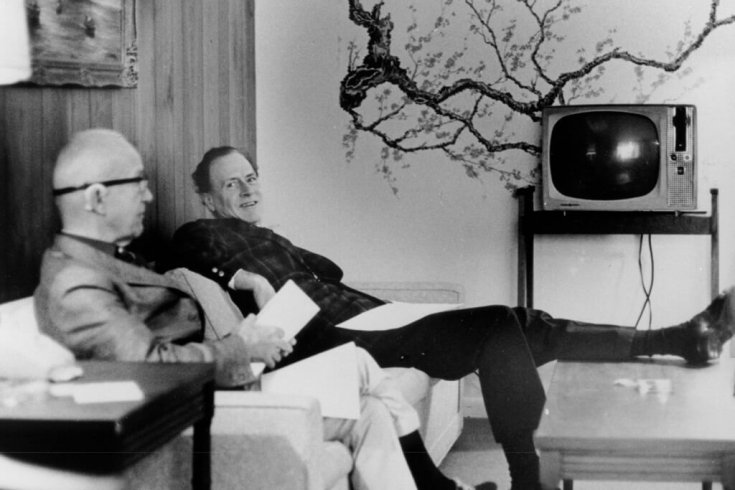 Photo courtesy of Primitive Features and the McLuhan Archive

The opening sequence of Kevin McMahon’s fine and lovingly assembled documentary film McLuhan’s Wake takes the form of what Marshall McLuhan presumably would have recognized as an embodiment of his immortal dictum, “the medium is the message.” Camera shots of a tempestuous ocean dissolve into computer animation of a sailor in a small boat sucked into a whirlpool, then to archival footage of McLuhan himself, forty or fifty years ago, at a college lectern somewhere, but now seen to be speaking as if from the bottom of the sea. He talks about men being drowned in the furious immensity of their own technologies, lost in the “huge vortices of energy created by our media,” and the soundtrack shifts to a voice-over reading a passage from Edgar Allen Poe’s short story “A Descent into the Maelstrom”—“With all hope lost…I found myself idly studying the action of the vortex. Some objects did not fall, but were whirled up to the level of the sea! Therein laid my salvation! I tied myself to my old steamer trunk…and I abandoned my doomed ship.” The figure of the sailor makes good his escape into virtual reality, the steamer trunk sinking back into the depths, its lid broken open and the contents—pages torn from what were once the world’s meaningful books—drifting away in the current like strands of aimless seaweed.

Having thus compressed the energy of McLuhan’s thought into the space of four minutes and thirty-seven images, the film recasts the pattern of his life as an adventure story in which the protagonist survives his plunge into an abyss. With the flotsam of the biography and select quotations from the once-famous author’s once-famous books, McLuhan’s Wake sets itself the task of rescue by rewinding the voyage of the young grammarian educated at Cambridge University in the 1930s (immersed in the plays of Thomas Nashe, the letters of John Ruskin, and the poems of T.S. Eliot and William Blake) who returns to North America as a professor of English literature at the University of Wisconsin, and there encounters the “pop culture” made from Hollywood movies, television game shows and situation comedy, Madison Avenue advertising slogans.

Unable to place J. Alfred Prufrock in a Miami nightclub with Rita Hayworth, or Stephen Dedalus on a highway billboard with a bottle of Old Milwaukee beer, McLuhan finds himself lost in an “acoustic world, one with no continuity, no stasis, which comes at us from all directions…a totally new information environment of which humanity has never had any experience whatever.” He notices that by eliminating the dimensions of space and time, the accelerated data streams of the electronic media also eliminate the association of cause with effect, that in what he comes to see as both “the global village” and the “pool of Narcissus,” the time is always now. Spin the merry-go-round of the automatous media in such a way that all the world’s joy and all the world’s sorrow is always and everywhere present (if not on Channel 4 in New York or Los Angeles, then on Channels 27 and 41 in London or Rangoon; if not on cnn or Oprah, then on the Sunday night movie, at

Within a matter of months the book acquired the Q-rating of Holy Scripture and made of its author the foremost oracle of his age. Fifty-three years old at the time, a rumpled figure in campus tweed, adamantly opposed to “all innovation, all change,” McLuhan regarded himself as a prophet bearing bad news, not unlike Cassandra foretelling the ruin of ancient Troy. Framing his observations on the premise that “we shape our tools and thereafter our tools shape us,” he proceeded to an analogy between the Fifteenth-Century invention of moveable type and the Nineteenth-Century invention of the electric light bulb. Just as the printing press incited a revolution that overturned a settled aesthetic and political order, the practical applications of electricity—as telephone, telegraph, computer, and television screen—remanded to oblivion any and all prior definitions of reality. Content follows form, “we become what we behold,” and new systems of communication give rise to new structures of feeling and thought. The visual structure of the printed page supports a perception of the world biased in favour of sequence, roads, narrative, hierarchy, classification, straight lines, empires, and the novels of Jane Austen; glimpses of the world derived from the electronic media shape a sensibility geared to improvisation, circles, discontinuity, repetition, simultaneity, incantation, ten-second soundbites, and the wisdom of David Letterman. The habits of mind associated with the rule of images destroy the civilization dependent on the meaning of words.

A catastrophe, as the prophet never tired of saying, but one of so large a magnitude that neither his admirers nor his critics wished to believe it had occurred. Even as McLuhan passed across the zenith of his fame, in the late 1960s, he was mistaken for a vaudeville entertainer, a dealer in exotic aphorisms and rare conundrums—“the electric light is pure information,” “we are the television screen…we wear all mankind as our skin.” Woody Allen placed him on the set of Annie Hall, Andy Warhol appointed him honorary muse. The professor became an eponym, and for the five or six years during which his Delphic utterance remained in vogue among fumblers after the season’s stylish truth in Harper’s Bazaar as well as The New York Review of Books, the magical word, “McLuhanesque,” served to explain otherwise inexplicable moral announcements and fashion statements.

The excitements associated with Understanding Media didn’t survive its author’s death (on New Year’s Eve, 1980), and, as perhaps was to be expected from craftsmen still working in a medium that the decedent had declared extinct, the obituary notices were less than kind. The judgment was poorly timed. Much of what McLuhan had to say makes a good deal more sense in the Twenty-First Century than it did in the Twentieth, his prescience made manifest by the instruments (fibre optics, satellite television, CD-rom, and the Internet) that he didn’t live to see shaped in silicon or glass. The postmodern imagination is the product of electric light, but, as a means of perception, it is more accurately described as prehistoric. The vocabulary is necessarily primitive, reducing argument to gossip and history to the telling of fairy tales, and as McLuhan noticed forty years ago, the accelerated technologies of the electronic future carry us backwards into the chaos of a primordial past. Nothing necessarily follows from anything else, narrative becomes montage, sequence merely additive instead of causative, politics transformed into spectacle, and art replaced by dreams. The media make a loud and wonderful noise, but to whom do they speak, and in what language?

McLuhan never abandoned the questions, and in the last ten years of his life, no longer in the limelight and his name an easy tag for the failed hopes of a discredited decade, he continued to devise strategies of evasion and survival, observing that “anything I talk about is almost certain to be something that I’m resolutely against…it seems to me that the best way of opposing it is to understand it and then you know where to turn off the button.” McLuhan’s Wake extends and elaborates the project by recruiting the techniques of film to the defence of the civilization founded on the keel of print. The director, Kevin McMahon, deploys the tradecraft of a sophisticated electronic sensibility—stock footage rendered as poetic image, symbolic mosaics displayed in the manner of Cubist painting, a polyphonic counterpoint of voice-overs (among them those of McLuhan’s son and grandson)—to quarrel with its own nature and question its own existence. The result is as artful a documentary as I can remember ever having seen.”

Lewis Lapham is the founder and editor of Lapham’s Quarterly and the former editor of Harper’s Magazine.