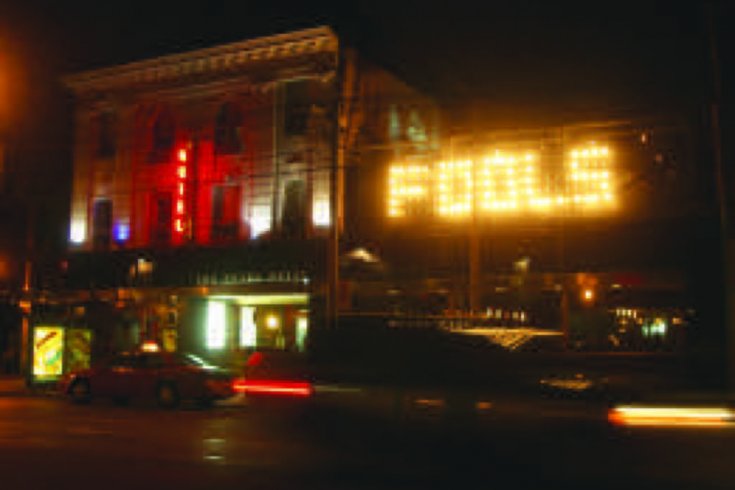 A light board programmed by the public, at Toronto’s Drake Hotel, was part of the first McLuhan International Festival of the Future. / Photo courtesy of p2p

toronto—A trumpeter stands beside a bus shelter belting out jazz riffs, while out on the street a man on stilts galumphs past as a juggler tosses fire. On this warm October evening in 2004, a crowd mills across the street from Toronto’s dandified Drake Hotel, as a half-dozen revellers traipse by, each one carrying a white umbrella decorated with a pink swathe of cloth. All eyes are directed toward a black, ten-metre-wide billboard decorated with 125 light bulbs in front of the building. This is p2p: Power to the People, a new media installation by Gorbet Design, Inc. that is set to open the first annual McLuhan International Festival of the Future. p2p is to be the festival’s literal and metaphorical flashpoint.

The concept is simple: across the street from the light board sits a console fitted with 125 switches. Citizens can make their own messages by flicking them to create patterns of light. “This will be so empowering,” says Matt Gorbet. “Someone can step up and have a voice. People are our medium.”

At 9:30 the lights go on. The crowd stares, concentrating, looking for meaning. Instead, they spy a black slab of wood holding a grid of light bulbs, some on, some off. It’s difficult to discern any words. “Are they trying to spell something?” Hard Core Logo screenwriter Noel Baker says to no one in particular. “Does it spell anything? Does it say anything? Is it supposed to say anything?”

Not far away, TV mogul Moses Znaimer stands grinning like a schoolboy. “You know,” he says, “the ironic thing is that Marshall McLuhan would have utterly hated this. He couldn’t stand this sort of thing. He was a medievalist; he was a classical scholar.”

As the McLuhan Festival chugged along over the next ten days, this opinion appeared so pervasive that it verged on becoming a mantra. “If my father heard that there was going to be a festival celebrating him, he would have gotten the hell out of town,” says his son Eric. “He would have found the idea of a McLuhan fan club crazy.”

The McLuhan Festival was intended to create a “city that thinks,” and while the goal of turning Toronto into a “city that thinks” might appear right up there with “peace in the Middle East” and “the end of poverty,” the idea of celebrating one of Canada’s greatest icons has been around for years.

Along with Glenn Gould and Northrop Frye, Marshall McLuhan was one of the most influential Canadian intellectuals of the late twentieth century. Gould’s genius lay in the way he played, Frye’s lay in the way he read, and McLuhan’s lay in the way he dissected the effect of communication and media on mankind in books such as Understanding Media, published in 1964. He initially feared his work might not catch on. In 1955, he wrote to his friend and mentor Wyndham Lewis about a group of professors and graduate students who were studying new-media communications. “My own approach,” he confessed, “finds neither favour nor comprehension among my colleagues.” The isolation did not last long. In a 1965 New York Herald Tribune article entitled “What if He is Right?” Tom Wolfe put forth the possibility that McLuhan—architect of the “global village” and coiner of the term “the medium is the message”—might be the “most important thinker since Newton, Darwin, Freud, Einstein and Pavlov.” The first wave of “McLuhanacy” was launched.

Along with being inspirational, McLuhan was, and remains, one of the most misunderstood and misquoted thinkers of his era—as Woody Allen illustrated when he had him appear in Annie Hall chastising an academic for misrepresenting his ideas: “How you ever got to teach a course in anything,” McLuhan tells the stunned prof, “is amazing.” The years have not cleared away the fog, and the McLuhan Festival became a nirvana for various “medium is the message” disciples, all of whom spouted different versions of the gospel. “McLuhan didn’t believe in laying it all out,” said Alex Kuskis, an adjunct professor at Wilfrid Laurier University in Waterloo, Ontario. “He put the responsibility on the listener. That’s why his writing can be so difficult.”

In fact, what at times seemed lacking in the McLuhan Festival was any reference to the man or his work. For example, “Engineering Future Culture,” held in the basement of the Drake, was devoid of any real grounding in McLuhan. It might have been appropriate to start the discussion with some reference to his essay “The Role of New Media in Social Change,” but instead the panel, which included Anthony Bannon, executive director of George Eastman House, Steve Dietz, director of New Media at the Walker Art Center in Minneapolis, and Priamo Lozadas, a curator at the Conaculta in Mexico City, spent an hour on introductions and then dove into an interminable discussion on the preservation of Internet blogs. Terms like “revisioning” and “recontextualize” were tossed around like lighters at a Ku Klux Klan meeting, and frequent citations were made to “engineering social change,” which led one to nervously recall another group of people who, during the Weimar Republic, also met in basements and advocated social change. As one festival-goer succinctly observed after spending three hours listening to “Engineering Future Culture,” “This is shit.”

The festival’s final session, the unfortunately titled “Probing McLuhan,” went entirely in the opposite direction. Also held in the basement of the Drake, the talk began with the playing of a country and western song called The Ballad of Marshall McLuhan, but this jovial start sputtered as four panelists then delivered dry recitations of academic papers. The speakers’ intimacy with all things McLuhan was obvious, but, with the exception of the occasional reference to David Cronenberg’s Videodrome, much of their theorizing seemed beyond the average slack-jawed journalist or new-media type. By the end of three hours, one was left feeling that the “message” was “send more coffee.”

While less than a stellar representation of McLuhan, the festival, as a new-media experiment, was admirable and organizers say approximately 5,000 people attended. It showcased intriguing installations from Habitat, the Canadian Film Centre’s new media lab, such as Scanning Nature, an amalgam of three works that explored the effect of technology on the senses. “Story and Play” was a project directed at children that featured stories like Swamp and Anasi: World of Folktales.

The folks behind p2p say their installation went on to display easily identifiable text and drew admiring crowds. “p2p is about expressing yourself to others,” designer Susan Gorbet later explained, “and saying what you’ve always wanted to say in a public context.” Messages such as “Fools,” “sos,” “Love,” “Lame,” and “I’m Gay” were lit up. The Drake’s management was so pleased, they kept the light board up for an extra two weeks.

As the last few intellectual thrusts of “Probing McLuhan” wound down, a figure rose from the crowd and said a few words. The voice was eerily reminiscent of the Master, as was the rhetoric. It was Eric McLuhan. “The new media won’t fit into the classroom,” he told the audience. “It already surrounds it. Perhaps that is the challenge of counterculture. The problem is to know what questions to ask.”

For the first time that afternoon there was silence, and it spoke volumes. 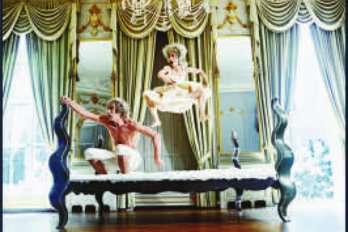