Happy Medium Is the Message | The Walrus
Skip to content 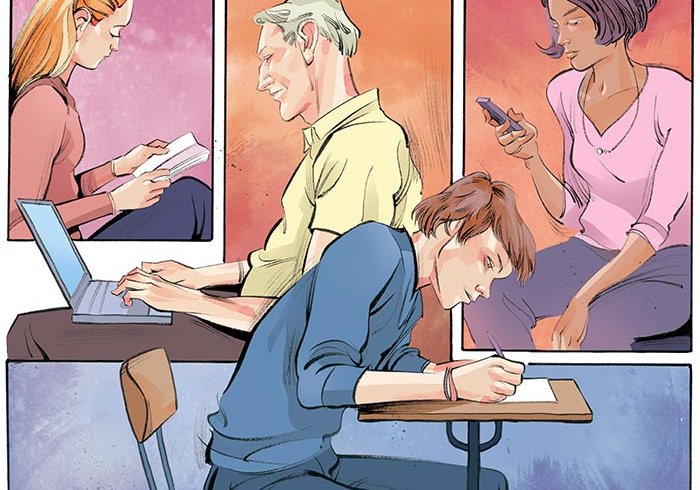 Nobody talks about “the Canadian mind” anymore. It seems absurd to think about our country having a unified intellectual tradition: we are ever-more saturated in global influences, indeed deep fried in spillover from the overheated empire to our south, and internally splintered along regional lines.

Yet as late as 1984, it was possible for a serious political scientist, Arthur Kroker, now at the University of Victoria, to write a book called Technology and the Canadian Mind, arguing that there was a distinct Canuck Volksgeist centred on a specific topic. “Canada’s principal contribution to North American thought,” he asserted, “consists of a highly original, comprehensive, and eloquent discourse on technology.”

His thesis focused, plausibly enough, on Harold Innis, Marshall McLuhan, and George Grant. A path-breaking political economist, Innis contended that communication technology wasn’t neutral but contained a bias that shifted the culture toward either stability or creativity. Building on that, McLuhan, the English professor turned media guru, argued that the modern world was becoming a global village. This prospect alarmed the conservative philosopher Grant, who fretted that Canada’s historical uniqueness would be swallowed up in a technology-based global empire.

I long ago dismissed Kroker’s monograph, but it came to mind with unexpected respect as I read the superb new book Smarter Than You Think: How Technology Is Changing Our Minds for the Better, by Canadian-born journalist Clive Thompson. A regular contributor to Wired and The New York Times Magazine, he updates the “discourse on technology” by examining how our culture is being transformed by the digital gadgets that increasingly surround us like a second skin. He is less interested in the particular workings of doodads and gizmos than in their ripple effect through everyday life. The book takes a sweeping view, surveying a host of experts and their scholarly research on cognition and tech use. But it also humanizes the subject by narrowing in on users, including ten-year-old kids who have learned to do complex math with computer programs, and the brilliant but scatterbrained Gordon Bell, a “committed life-logger” who is perpetually outfitted with an audio recorder and a fish-eye camera that snaps pictures every sixty seconds.

Thompson’s thesis rests at the vital centre between the apocalyptic thinkers who believe Twitter is destroying civilization (Grant at his most mournful), and the Silicon Valley boosters who proclaim that the digital heavens are about to open (McLuhan at his giddiest). In Kroker terms, then, Thompson is a classic Innisian realist: someone who recognizes that technology unleashes unexpected changes that are hard to control, but who also has faith that humans retain the ability to subdue these new forces.

If anything, there is another great Canadian mind invoked in Smarter Than You Think. Though Thompson has made his home in the United States for many years, he was at the University of Toronto in the ’80s, while I was a student there. (Full disclosure: we’ve never met, but we have friends in common.) Reading the book, I felt the presence of our shared alma mater. The influence of Innis and McLuhan, as well as Northrop Frye, was very much in the air when we were undergraduates. There might not be a Canadian mind, but there is, or was, a U of T sensibility, with Frye at its heart: a judiciousness and a desire to balance competing claims. Thompson displays this sensibility admirably; he’s level headed, skeptical of hype, and keen at observing patterns.

Take Wikipedia, for example, with its View History function. He praises it for allowing readers to pull back the curtain on entries, making “visible just how much debate goes into the creation of a factual record.” However, he counterbalances this appreciation of Wikipedia’s fluidity and open disputation with the acknowledgement that the printed page’s “typographical fixity” (a term he borrows from scholar Elizabeth Eisenstein) is “a superb tool for focusing the mind.”

He comes down on the side of “cognitive diversity,” the cultivated skill in “knowing when to shift between public and private thinking—when to blast an idea online, when to let it slow-bake.” Our newest devices work best for us when they are balanced with older, more tangible tools. “When I get blocked while typing away at a project on my computer,” he writes, “I grab a pencil and paper, so I can use a tactile, swoopy, this-connects-to-that style of writing to unclog my brain.”

Readers will be struck by numerous “shocks of recognition” (as Edmund Wilson might have put it) like this one, and by other accounts of such everyday but hitherto undelineated experiences, such as the outsourcing of our memory to Google; or by the observation that the phone call has become an increasingly rare social form, perhaps even the subject of nostalgia. Meanwhile, contemporary forms of engagement like Twitter and Facebook are more than just repositories of trifles, Thompson argues; they’re a way to gain “ambient awareness” of our family and friends. “Each little update—each individual bit of social information—is, on its own, pretty insignificant, even mundane,” he writes. “But taken together over time, the snippets coalesce into a surprisingly sophisticated portrait of your friends’ inner lives, like dots forming into a pointillist painting.…Follow someone’s ambient signals for a day and it seems like trivia. In a week it seems like a short story. In six months, a novel.”

Despite the celebratory title, the book’s tone is guardedly optimistic. Eschewing the temptation to decry new developments, Thompson develops useful analytical categories to describe the impact of digital technology. The thrust of his argument is that technology is democratizing tools that were once the preserve of the elite. Cyber-clouds enable ordinary citizens, not just the rich and powerful, to archive their histories in vast photo and email collections. Blogs and Twitter allow non-professional writers to find an audience for their musings. The brute pattern-finding ability of computers offers regular people a form to express themselves visually: pie charts are no longer the exclusive domain of statisticians, and YouTube has opened up broadcasting to the masses.

These developments, he says, have positive cognitive effects. One example is in the repercussions of the act of writing. Trolls aside, for most people the shift from being a reader to becoming a writer changes not just what they do but how they think. Taking a phrase from social scientists, he refers to the presence of an “audience effect” that kicks in when we try to explain our ideas to others, forcing us to “think more precisely, make deeper connections, and learn more.”

He is honest enough to include caveats and provisos (often tucked away in parentheses). For example, an account of how social media have inadvertently fostered a democratic revolution in Egypt is followed up by an acknowledgment that despots have used those same technologies to round up dissidents. The book’s cautionary notes are numerous enough that you could isolate them and make a counter-tome arguing against Thompson’s main thesis.

Implicit throughout is a philosophical paradox that neither he, nor any of the great theorists of technology, can quite resolve: the role of personal choice. Consider the subtitle “how technology is changing our minds for the better.” But technology, of course, is a human invention that has, in and of itself, no agency—or, at least, none till artificial intelligence is achieved. So when Thompson says technology is changing us, what he really means is that we are changing ourselves.

“Digital tools aren’t magical pixie dust that makes you smarter,” he writes. “The opposite is true: they only give up the rewards if you work hard and master them, just like the cognitive tools of previous generations.” This idea forms the wise core of his book, but it is occasionally undermined by his tendency to anthropomorphize machines, to pretend that the movie fantasies of HAL, Commander Data, or Skynet have already occurred.

This is evident, for instance, in his otherwise valuable discussion of memory as a collaborative enterprise. He notes that our loved ones are transactive memory partners; we rely on them to know certain things we might forget, just as they do for us. I can safely forget to pay the bills, because I know my wife will remember, just as she is free to ignore the groceries, knowing that I’m keeping tabs on what’s in the fridge. Increasingly, search engines such as Google serve as mechanical “transactive partners.” Thompson goes so far as to reason that “in some ways, machines make for better transactive memory buddies than humans. They know more, but they’re not awkward about pushing it in our faces.”

In fact, machines don’t “know” anything at all. Computer memory is a metaphor. Computers don’t remember facts; they store them. There are both foolish and intelligent ways to use their storage capacity, but nothing is to be gained from thinking of these objects as our “buddies.”

Thompson is not a polemical political writer, yet his book contains an underdeveloped subplot, contending that the positive effects of technology are often blunted by the corporate goal of maximizing profits. The more people are aware that others are working on a problem, he points out, the faster innovation occurs, because “people who are talking and writing and working on the same thing often find one another, trade ideas, and collaborate.”

The benefits can’t work in all circumstances, though: “If you’re worried about making a profit, multiples dilute your special position in the market,” he says. “They’re depressing.” Elsewhere, he observes that if you want to have spirited conversations but control your online identity, small sites are better than Facebook, because they “don’t need to succumb to the privacy-eroding logic of monetization.” The centralizing power of corporations, often allied with the state, is a problem that runs through the book like a chronic itch: it’s scratched but never confronted as a serious ailment.

If he had consolidated his thoughts on the dangers of corporate power, the book would have more bite, even if it would be less celebratory. Part of the story he’s telling is that corporate capitalism doesn’t allow us to enjoy the full bounty of the technologies we are collectively creating. Thus the social benefits of ambient awareness are mitigated by the “the corporatist logic of treating your personality as a commercial product, what’s good for General Motors is good for you. You want as many customers for your utterances as possible”—an important lesson that needs to be expanded upon.

Even when the implications of his ideas aren’t fully fleshed out, Thompson is a rich and provocative thinker. I’ve spent a good part of my mental life arguing with Innis, McLuhan, and Grant. In whatever Elysium these sages now reside, they can take satisfaction in knowing that Thompson is continuing the conversation.

Jeet Heer is the national affairs correspondent for The Nation magazine. His most recent book is Sweet Lechery: Reviews, Essays & Profiles.
Kagan McLeod