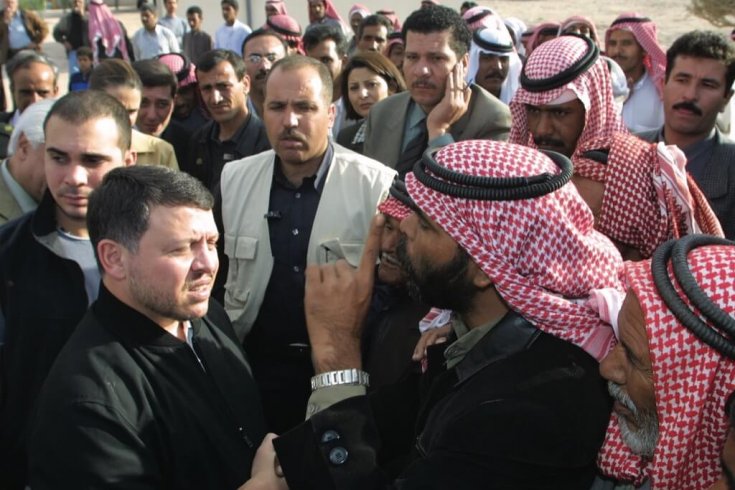 amman—Liberation, as in the phrase “liberation of the Iraqi people,” carries a happy theological ring. It brings to mind neighbours, including those who firmly believe they’ve been sinned against, joining hands and raising their voices in a glorious hallelujah.

But, when it comes to the Middle East, liberation is never quite as harmonious as, say, Mahalia Jackson singing “Every Time I Feel the Spirit.” Most informed people understand that bringing Iraq into the fold may be more difficult than reconstructing a spoiled infrastructure. Less well understood is the ripple effect set in motion by the U.S. invasion. In a region in which borders were artificially drawn, the impact of the bombing only began to be felt last summer, when, for example, the Jordanian embassy in Baghdad was bombed.

Ever since King Abdullah bin al-Hussein, the forty-third-generation direct descendant of the prophet Muhammad, ascended to Jordan’s throne in February of 1999, he has been diligently and unrelentingly applying himself to the work of liberation. He laid out his strategy in a two-stage plan. Phase one, the so-called economic plan, focused on putting bread on the table, which, to Abdullah, meant attaining accession into the World Trade Organization, clinching an association agreement with the EU, and signing a free-trade agreement with the U.S. By the fall of 2002, the sluggish Jordanian economy had registered an economic growth rate of 4.9 percent, so the king had every reason to be optimistic.

He then turned to the much more difficult task of reforming civil society, launching a campaign dubbed “Jordan First.” By recruiting television and radio personalities, placing newspaper ads, renting billboards, and distributing stickers and pins, Abdullah loosed a media blitz that would have made Madison Avenue proud. He coined a motto, “We can differ on anything provided we agree that Jordan comes first.” For a logo, he chose a rather cumbersome but inclusive five-armed, cross-cultural figure.

King Abdullah’s liberal reformist credentials are impeccable. The eldest son of King Hussein and the British-born Toni Avril Gardner, the king began his secondary education at St. Edmunds School in Surrey, England, attended Eaglebrook School in Deerfield, Massachussetts, and began his military training at the Deerfield Academy in the same historic New England town. He enrolled at Oxford University in 1984 and took courses in the School of Foreign Service at Georgetown University, in Washington, D.C. He is one of the few Arab leaders—likely the only one—who regularly meets with journalists for informal briefings at which he happily talks about a whole host of issues, from regional and international crises to the most hotly debated domestic developments. As top palace officials bristle with impatience, the forty-one-year-old king holds forth on his wishes to streamline the messy thirty-one-party system down to three major parties. He speaks heartily of the privatization of state-owned enterprises and favours a quota for women in parliament. His most important goal, however, is to break the stranglehold in which tribal law holds much of Jordan.

But the tribal chiefs, ensconced in the south, are unimpressed with the king’s pedigree, indifferent to reform, and more than glad to grab any opportunity to turn back the clock. The eruption of the second intifada in 2000, the catastrophe of September 11, 2001, and the Iraq war in March, 2003, all provided them with ample opportunity to do just that. Three times in as many years, Abdullah has been forced to dissolve parliament, and in late 2001 he watched as the prime minister, Abdur-Ra’uf S. Rawabdeh, hijacked the legislative process. Politics and dissent were put on a short leash, and the electoral process refashioned in favour of the governing Islamist party.

By the end of last summer, human-rights organizations were accusing King Abdullah of human-rights abuses. Indeed, a slew of “temporary laws” have been decreed at dizzying speeds. Under the Public Gathering Law, freedom of association has been seriously curtailed. People wishing to protest must now apply for a permit, which is almost never granted. Criticism of “friendly nations” such as the U.S., Lebanon, Britain, or Canada is deemed a breach of state security, and offenders are tried in a military court. Reporters filing critical commentary can face harsh penalties—up to three years in prison. Civil servants are prevented from signing petitions. In October 2001, the scope of the death penalty was increased, and the penal code as a whole was made more severe.

The result of all of this is a body politic grown indifferent and suspicious of all reform agendas. Walking the streets of Amman last winter, one could not help but be struck by the growing sense of despair. As far back as January of 2003, a good three months before stealth bombers began flying nightly sorties over Baghdad, the mood in Amman was sombre. Jordanians were convinced the war was inevitable and terribly anxious about the fate of family and friends in Iraq. Yet there were no spontaneous eruptions of dissent such as were seen in Europe. Jordanians took little exception to their own administration’s subtle but important support for the American position. By early summer, indifference had reached an all-time high. Voter turnout for the three-times-delayed election of June 17 was, in fact, so low that 152 of the 554 seats went uncontested.

The rollback of human rights is concerning. But one must also recall that King Abdullah’s grandfather, the Hashemite King Abdullah I, was assassinated on the front steps of the Al Aqsa mosque in Jerusalem just as he was about to sign a peace agreement with Israel. King Abdullah’s father, Hussein, only fifteen years old at the time, was saved only because the bullet aimed for his heart was stopped by a medal on his uniform. This is the Middle East and progress never comes except as a backward forward sideways march over time. To act as though it could be undertaken more efficiently is simply hubris. To ignore the consequences of intervention is just plain dangerous.

David Berlin is the founding editor of The Walrus and author of The Moral Lives of Israelis: Reinventing the Dream State.