Life after “Johnny’s League” | The Walrus
Skip to content 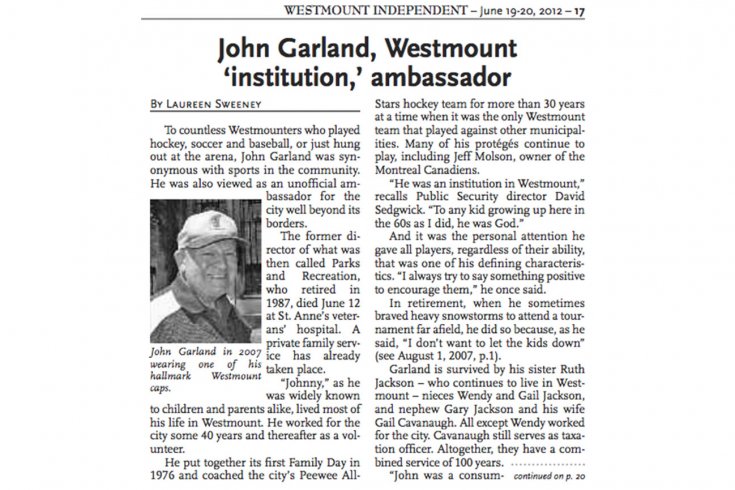 In June 2015, a former minor hockey league player accused a city within Montreal of turning a blind eye to a well-known coach’s abuse of children and teens under his guidance. Today, the city of Westmount, where John Garland managed sports programs for thirty-four years, announced it will open a claims process for victims with a $2.5-million settlement.

The agreement, to be confirmed in court later this year, will allow former players sexually abused by the late coach between 1953 and 1987 to submit statements detailing their experience, for a minimum claim of $35,000 each. Matthew Bissonnette, a fifty-one-year-old director and a former Peewee All-Star who grew up in Montreal, filed the class action seeking compensation for kids and teens like him, who were sexually abused by Garland while he led sports programs in Westmount.

On June 12, 2012, Garland died before facing accusations of sexual assault from former players.

This story, while horrible, is not unfamiliar. In his 2009 autobiography, retired NHL player Theoren Fleury wrote how his minor-league coach ruined his life. His former coach, Graham James, was convicted of sexually assaulting Fleury and his cousin in 2012. James was found guilty of abusing other players in separate cases—six men came forward in total—and he was granted parole in the fall.

Like the former Calgary Flames star, Bissonnette is speaking openly about his trauma to encourage other sexual assault survivors to report. “If people talk about it more comfortably everyday, then the kid who’s sitting alone, who’s being abused, is going to hear that discourse and understand that it’s possible to come forward,” he said. Bissonnette’s lawyers wouldn’t say how many victims have joined the class action so far, but the settlement will be open to twenty-five people who can each claim $100,000.

At age twelve, Bissonnette graduated to Garland’s Peewee All-Star hockey team in Westmount. The hockey program run by the longtime sports director was known as “Johnny’s League,” according to the motion, and Garland picked favourites—“Johnny’s Pets”—to receive car rides home, special access to the arena and use of his personal locker. The class action request filed against Westmount in 2015 details the way Garland invited a young Bissonnette into his apartment, where the abuse took place, from 1978 to 1980, before he transferred to a hockey team in a different part of Montreal.

Garland was called an “unofficial ambassador” for Westmount and a “god” to the children, according to an obituary published by one of the local papers. As a central institution for kids and teens in the area, a spot on the Peewee All-Stars was enviable, and winning Garland’s favour was considered good fortune. “There are kids who grew up there, they had a pedophile operating for a very long period of time,” Bissonnette said. “He abused probably numerous kids and it’s good that people are recognizing the reality of that situation.”

Garland retired in 1987, but continued to attend Westmount’s minor league games, even as the redevelopment of his apartment building forced him to move further west in Montreal. As a director of the Parks and Recreation department, Garland was responsible for forty teams year-round. “I was just some guy who worked in Westmount, who was privileged to meet hundreds of kids and enjoyed every second of the job,” Garland told the Westmount Independent in 2007.

Now based in Los Angeles where he directs films and commercials, Bissonnette has spent the last decade coming to terms with the abuse he experienced as an adolescent hockey player at the hands of a well-respected city employee. “My life has gotten exponentially better every day, every week, every month, every year that I’ve been in therapy, gotten sober and been open about child and sexual abuse,” he said. “But that’s just my experience.”

The settlement signed Tuesday is pending court approval on May 1. Once endorsed by a judge, survivors that were abused by Garland between 1953 and 1987 will have ninety days to make a claim. Those who submit their stories won’t face cross-examination, according to Bissonnette’s lawyers. In a similar settlement in 2013, the Montreal school board agreed to pay $5 million to the victims who were sexually abused by a high school biology teacher. Thirty-one claims were made by former students who were violated by Renwick Spence from the late ’60s to early ’80s. Spence was sentenced to thirty months in prison after he pled guilty to the indecent assault of eight students in 2007.

It’s impossible to change the lives of the children abused by Garland and other community leaders, but Bissonnette says restoring trust in a legal system that supports young victims is a start.