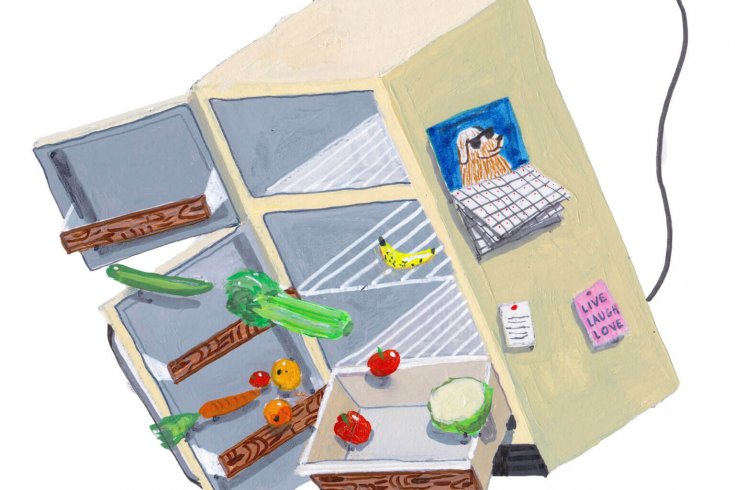 Domik, a forty-nine-year-old resident of Innisfil, Ontario, has been on YouTube for a decade. He was working in video production for the York Regional District School Board when two co-op students first told him about the site. “They made fun of me for not having a channel or putting up videos,” he says. “Back then, a lot of YouTubers thought it had to be like television: you needed a script and a cameraman. It turns out all you needed was a GoPro and a good idea.”

When Tim Hortons introduced its egg-on-a-biscuit sandwich in 2006, attempting to horn in on the fast-food breakfast racket dominated by McDonald’s, ­Domik reviewed it online. He quickly found an audience and realized he could make money by partnering with YouTube. Already unhappy at his day job—cutbacks had turned him into a “glorified PowerPoint maker”—Domik resigned and dedicated himself to eating full-time. A few years and 300,000 subscribers later, he’s reviewed everything from off-menu abominations such as the T-Rex, to a dozen Tim’s doughnuts (inhaled in one sitting), to a pink-tinted Hero Burger designed in support of the Canadian Breast Cancer Foundation (“The sauce is a little on the tangy side,” he says, detecting a soupçon of beetroot). And while he was once embarrassed to tell people that he’d left a respectable job to eat tacos in his car, today he says he’s a proud YouTuber, making more money online than he did at the school board.

If the novel was the defining art form of the nineteenth century, and cinema that of the twentieth, then surely the twenty-first century belongs to YouTube, where any weirdo can get famous if they find the right audience—or rather, if the right audience finds them. There’s a whole substratum of videographers online (mostly men) who sample the latest ­offerings from Wendy’s, McDonald’s, ­Little Caesars, Dairy Queen, and any other franchised establishment that specializes in calorific junk. Production costs are low by Hollywood standards, but filming in-car offers Domik a certain artistic freedom. “I don’t need approval from anyone,” he says. “When I’m in my car, I have complete control over my lighting, sound, ­audio. It’s like my own private studio.”

Domik is different from other Internet eaters. For one, he rarely does challenges—eating foods that are implausibly gross. And he’s not a competitive eater, the kind who ­ingests record-setting amounts of food in order to reap a free meal or souvenir ­T-shirt. The challenge eaters always seem on the verge of emesis, reduced to sweat and tears, victims of their own hubris. They eat like Pac-Men, wolfing trays of hot dogs without taking the time to savour anything. Domik doesn’t eat fast food as a dare or for sport. He eats it because he genuinely loves it.

In a food culture where the trend is toward haute-ing up junk cuisine, where lifestyle magazines review $20 hamburgers (too much to pay for any burger not topped with $15), it’s refreshing to see a guy like Domik rave over crap qua crap or lose his mind at the flavour profile of a chicken sandwich. “When I eat something at McDonald’s, I’m not comparing it to a five-star restaurant in downtown Manhattan. I’m comparing it to McDonald’s.”

Like many of Domik’s subscribers, I eat vicariously through him, gawping at every sensual close-up of every greasy mouthful. I recall eating a homemade vegan tempeh wrap while watching him bite lasciviously into a Meat Lovers pie from 241 Pizza and imagining that I was having what he was having, so to speak. This is what’s connoted by the phrase food porn: ­substituting the more desirable action onscreen for the humdrum options at home. And Domik’s videos are about as close to culinary erotica as you can get, with ooh-la-la! sound effects, and grease and ­secret sauce practically pumping through the camera lens. What he arouses in ­viewers, he says, “is that natural instinct to devour.”

Pineapple buns, double-applewood-smoked bacon, and sprinklings of taro chips are all well and good for refined palates—for people who want to eat junk food without feeling junky about it. But what Domik lacks in phony foodie refinement, he more than makes up for in enthusiasm and honesty. I don’t think I can trust anyone who doesn’t feel, deep in their heart of hearts, that Wendy’s has a good patty.

John Semley's latest book is Hater: On the Virtues of Utter Disagreeability. He grew up in the Niagara Region.
Brandon Celi