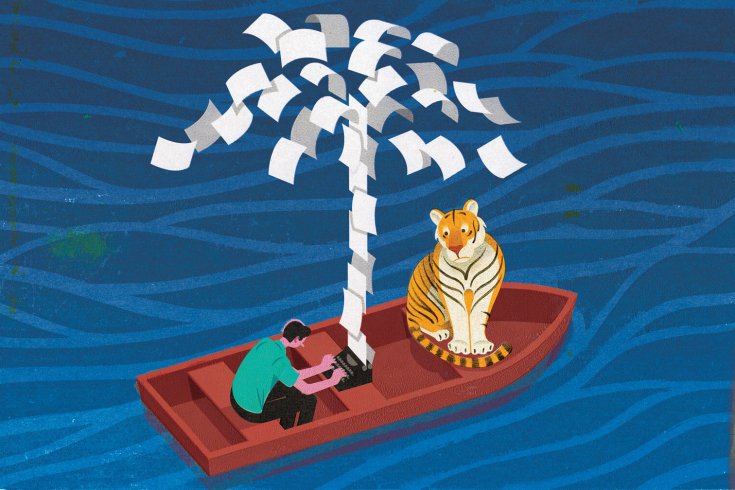 When Pi finishes telling his story to civil servants from the Japanese Ministry of Transport, he’s met with considerable skepticism. Up to that point in Yann Martel’s second novel, Life of Pi (2001), we’ve heard an elaborate tale of the boy’s survival on a raft with a crew of zoo animals, including a hungry Royal Bengal tiger. But officials aren’t buying it: “We just don’t believe there was a tiger living in your lifeboat.” Under pressure, Pi provides a more credible account, a gruesome tale of humans reduced to cannibalism on the high seas. “So tell me,” he concludes, “which story do you prefer? Which is the better story, the story with animals or the story without animals?”

Pi’s assumption that his interlocutors will inevitably side with “the better story” is Martel’s way of championing imagination over fact, faith over reason.

The novel’s publication history is its own fantastical story: an improbable tale of mainstream publishers betting on an author with a poor sales record (his first story collection sold only 700 copies when it was first published). Editors reasoned, correctly, that a book encouraging readers to pick the more beautiful, childlike, and comforting alternative to a grim truth would please a consumer base eager for inspiration.

Of course, one might argue that literature’s function is to offer hard-fought, self-incriminating, ambiguous consolations. But the Man Booker jury—which set out to popularize the prize in the first year of a new sponsorship—thought otherwise. Sales jumped 1,118 percent when Life of Pi won (it’s the bestselling winner in history) and experienced another boom when Ang Lee adapted it into an Academy Award–winning film. Life of Pi remains the century’s most successful Canadian novel, with more than 10 million copies in more than forty languages.

The “better story,” however, is more than savvy Scheherazadian bait. It is first and foremost Martel’s psychological guard against the reality of human suffering—a subject he doggedly avoids. “What was gained by a truth that left one with an ­empty feeling?” asks the narrator of his first novel, Self (1996), a book that grapples with the issue of identity via an aspiring writer whose sex spontaneously changes. The climax is a rape during which the page breaks into two columns: one narrates the scene; the other repeats “pain fear pain fear pain fear,” a kind of inverse applause sign for distress. While the book has all the trappings of ambitious fiction, it’s actually a bedtime tale: the narrator morphs back into a man, falls in love with a woman, and goes to Thailand. “Wonderful snorkelling” is one of the novel’s last lines.

In the author’s note to Life of Pi, Martel recalls that Self “vanished quickly and quietly.” Today, the novel is remarkable ­only for a glimmer of the choose-your-own-reality approach that Martel was soon to ride to historic success.

As if aware that Life of Pi was founded on childlike logic, his follow-up, Beatrice and Virgil (2010), is everywhere marked by the agony of trying to deliver something substantial, something for adults. And what could be more substantial than the Holocaust? Initially, Martel wanted to publish a flip-book on the subject—one half fiction, the other non-fiction. When his ­publisher balked, he folded the non-fiction essay ­into the story itself. Beatrice and Virgil tells of a famous writer, Henry, who becomes an informal editor for an old taxidermist. The taxidermist is writing a fable-like play with a donkey and a howler monkey that hints at a dark wartime secret.

Martel’s original essay was intended to argue for more creatively resourceful Holocaust depictions. Again, Martel hopes for a “better story.” The genocide, Henry claims, “was overwhelmingly represented by a single school: historical realism,” but surely “there was a spot for the imagination’s commentary.” Aside from being an astonishingly shallow reading of Holocaust literature—one that ignores the visionary flights of Paul Celan, among others—the argument misses how the Shoah challenged and in many cases obliterated the faith of European Jews, making any choice of “the better story” an outrage.

Beatrice and Virgil was a bestseller, but Martel’s attempt at a Holocaust novel threw into relief his greatest limitation: he is ill-equipped to talk about suffering.

In every way, Life of Pi was his magnum opus, because it turned his compulsive urge to beautify “pain fear pain fear pain fear” into the very subject of the book. The novel is a metaphor of its own ­making, in that it impels the ­reader to enact Martel’s own rationale when faced with a story of suffering. Invariably, Martel chooses the therapeutic story, as if the novelist’s job were to assuage affliction. His evasion of an “empty feeling” is why, when it comes to subjects of real misery—rape in Self, the Holocaust in Beatrice and Virgil, and now bereavement in The High Mountains of Portugal—his art seems woefully shallow.

The High Mountains of Portugal comprises three linked narratives—“Homeless,” “Homeward,” and “Home”—each of which centres upon a grieving man. The novel begins in Lisbon in 1904, passes through a provincial Portuguese city in 1938, and ends in its eponymous landscape in 1981. The settings could be almost anywhere at any time. Turn-of-the-century Lisbon is “a city of beauty and bustle, of commerce and culture, of challenges and rewards,” and rural Portugal is “a land that so unceasingly agrees to be agreeable.”

Tomás, the protagonist of “Homeless,” is a curator seeking a crucifix mentioned in the seventeenth-century diary of a priest named Father Ulisses. Having lost his own Holy Trinity—wife, son, and father—in rapid succession, Tomás walks backward as a way of objecting to God’s will. Why Tomás’s existential objection is expressed in the manner of a Roald Dahl character, no one can say; but we are meant to take this backward walking seriously enough to believe that it becomes a grieving ritual in a remote village seventy-five years later.

Tomás departs by automobile for the High Mountains of Portugal, where he thinks the crucifix is located. Its discovery, he believes, “would do nothing less than turn Christianity upside down.” It does no such thing. The revelation of the crucifix comes after a long, uneventful trip, which is basically the story of Tomás dealing with mechanical issues. The journey isn’t even made dramatic when Tomás runs over a child who turns out to be a beloved “Golden Child” the villagers come to worship in death.

Our second protagonist is a pathologist who has lost his wife, Maria. Her ghost comes to visit him on the eve of 1939—“May this year be a good one,” he declares with a historical wink to the reader—and delivers an interminable monologue on the parallels between Agatha Christie and the New Testament, nonsensically concluding that “Faith is the answer to death.” A woman named Maria appearing in a vision to offer spiritual guidance on the brink of World War II? This isn’t spoon-fed symbolism: it’s force-fed.

And “Home” tells of Peter, a Canadian senator who, following the death of his wife, moves to the High Mountains of Portugal with a chimpanzee named Odo. He was once “a lawyer in a legal firm,” but in Portugal, Peter discovers serenity through encounters with the inner life of animals. For an author lauded for zoological description, Martel oddly sees that inner life as “a sort of emotional amnesia centered in the present moment,” contradicting basic primatology: the chimpanzee has a rich, indeed historical, sense of self.

On the level of the sentence, Martel has never been strong, and, word for word, The High Mountains of Portugal may be his worst book. A meal shared by Peter and Odo is a “lip-smacking, finger-licking, grunting feastorama.” For Martel, a heart is something that “beats like a drum,” a stomach is “as turbulent as a stormy sea,” and a mind “moves in that alternately slow and abrupt way of a mind that is jarred.”

Such sophomoric writing infects the novel at every level. This book, ostensibly founded on grief, doesn’t accord its characters the dignity of real feelings. Martel reaches for hyperbole to signal profundity and then botches his metaphors in spectacular fashion. Tomás, for example, reflects that “Love is a house with an unshakable foundation and an indestructible roof. He had a house like that once, until it was demolished.” Sometimes it’s hard to believe good prose is being seriously attempted: the mother of the Golden Child says that grief is “a creature with many arms but few legs, and it staggers about, searching for support.” Martel knows ­only the maximum register, which becomes borderline insulting when the slave trade is equated with the trade for chimpanzees, animals who are then “shunted from one medical Auschwitz to another.” These aren’t sensitive, insightful connections; each link serves to distort what it joins.

When his experimental tricks are swept aside, Martel is a deeply conventional author suspicious of difficulty. He has called ­Günter Grass “too complicated and dense” and said he couldn’t finish Salman Rushdie’s Midnight’s Children. Although he sees himself as being in the business of making serious literature (he’s called his corpus “an intellectual autobiography”), his work is intended for the broad middle of the reading public, a spectrum marked on one end by the meat-and-potatoes escapism of John Irving and the other by the seriocomic self-help whimsy of Tom Robbins.

Martel’s novels do brilliantly illuminate one thing about human nature: faced with suffering, we experience a profound urge to turn away. And at every opportunity, The High Mountains of Portugal satisfies that urge: grief gives way to joy; spiritual guidance finds those in need; animals long believed extinct are shown to be thriving in the wild. It is impossible to know at this point in his career whether Martel’s insistence on therapeutic daydreaming emerges from a deep artistic conviction or from a desire to remain in touch with his ­consumer majority. In any case, serving up “the better story” is his side of a Faustian bargain, both the secret to his millions and the ­inherent defect of his art.

Michael LaPointe (@MWLaPointe) is the author of The Creep, published by Random House Canada in June. He has written literary criticism for The Atlantic, The Paris Review, and The Los Angeles Review.
Peter Ryan

Peter Ryan has worked with the Wall Street Journal, Variety, and The Walrus.