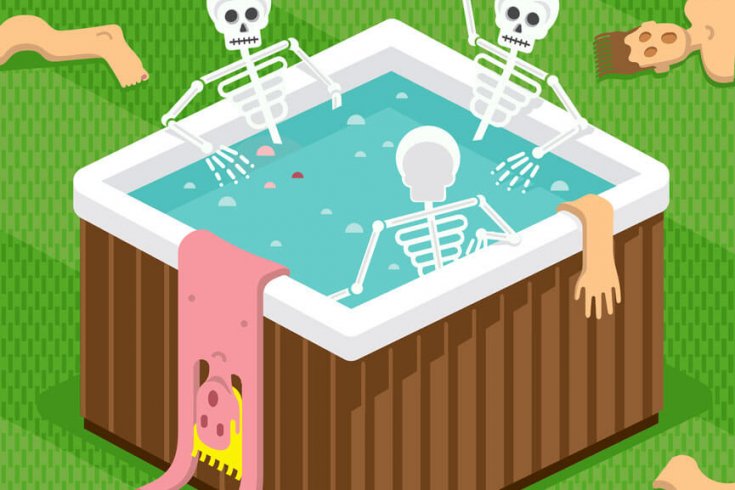 Dale Hilton can show you fear in a bagful of dust: 160 pounds of once-living human, pressure-cooked, baked, and pulverized into soft white powder fine enough to sprinkle over French toast. The ground bones sit in clear plastic on a counter, next to a pacemaker,
a false hip, and a pair of breast implants extracted from some of the eighty bodies Hilton has disintegrated at his bio-cremation facility in Smiths Falls, Ontario, an hour’s drive southwest of Ottawa. “It’s a lovely product,” he says, looking proudly at his handiwork.

Bio-cremation is the funeral industry–approved term for alkaline hydrolysis, a method of corpse disposal in which lye and water are heated under pressure, dissolving flesh and leaving only bone fragments and whatever surgical oddments the body contained. The process is often faster than traditional cremation and costs about the same, and the end product takes up less space than a standard burial. Bio-­cremation’s unique selling point, however, is its environmental friendliness. It consumes one-eighth the energy of cremation, requires no casket, and leaches no toxic embalming fluids into the earth. Yet it is still a niche practice, even in a country as green-savvy as ours: Hilton’s facility is one of just three in Canada.

Now forty-five, Hilton has been disposing of bodies ever since his dad got him started in the family funeral business twenty-five years ago. His foray into the liquefaction of corpses began more recently. In April 2014, he started a new venture, Hilton’s Unforgettable Tails, and set to work dissolving departed pets. (That business continues to thrive: even as I tour Hilton’s facility, someone’s 285-pound pig is simmering away into soupy oblivion, while several dogs repose stiffly in the on-site pet morgue.) He soon after applied to the municipal government for permission to bio-cremate humans, too. By October 2014, his new system—reserved only for people—had arrived, and last May, its developers, Joe Wilson and Scott Pennington of Bio-Response Solutions, came up from their headquarters in Indiana to show Hilton how to use it.

Around 7 p.m. on the third day of training, after a few dry runs, Wilson asked Hilton if he wanted to do his first corpse. Luckily, Hilton had two fresh ones chilling in his people morgue (down the hall from his pet morgue). Wilson said, “We’ll do both of them,” so Hilton laid out the first, shrouding its nakedness with a white sheet, and the men got to work. They measured out how much sodium hydroxide and potassium hydroxide they’d need and determined how long they’d have to run the system for, entering the information on a proprietary touch-screen computer.

The bio-cremation machine resembles a stubby torpedo tube. It rests on a fulcrum to which is affixed a farrago of dials and pipes, as well as a large metal wheel that can be spun to set the cylindrical chamber at a forty-five-degree angle. (Some people have a fear of drowning, Hilton explains, and the tilt ensures that the head stays above the alkaline solution — that is, until the legs and most of the torso disintegrate, leaving the head to slide into the slurry.) Before inserting the body, the men placed it in a metal basket that allows liquid to pass through but traps bone and other solids. They slid the basket in, locked down the lid, and tilted the chamber. “Push the button,” Wilson said, and Hilton did. It would be a couple of hours before the deceased was dissolved, so the men decided to go for pizza.

Sitting across from Wilson and Pennington at the restaurant, Hilton was anxious that their calculations might be off, that when the two hours were up, they’d open the chamber to find some macabre potage of person. Unlike flame-based cremation, where you can leave the body in a little longer if it’s not quite done, Hilton’s machine works on a preset cycle, like a dishwasher. “So if I pull that body out and it’s not finished,” he says, “I have to put it through the whole cycle again.” But the Americans told Hilton not to worry. As the men ate, the corpse started to dissolve. Heating rods along the inside of the chamber brought the solution to 302 degrees Fahrenheit, producing a faint detergent odour. A small propeller agitated the mixture, churning the body like a spoon stirring a sugar cube. When the men returned to the facility, they found that the machine had commenced its cool-down cycle. The opaque greenish-brown liquid that was once brain and heart and lungs had sluiced through a series of pipes and tubes to be filtered and redirected to the local water-treatment plant—“just like water from the drains in your house,” Hilton says.

As a way to dispose of loved ones, alkaline hydrolysis is relatively new; a ­funeral home in Prince Albert, Saskatchewan, was the first to offer the service in Canada, in 2012. But as a way to get rid of the dead more generally, the process is surprisingly old. It was patented in 1888 by Amos Herbert Hobson, a British chemist who believed it could be employed to produce fertilizer from animal carcasses. A century later, two professors at Albany Medical College created the so-called Modern Tissue Digester, a machine that uses alkaline hydrolysis to destroy human cadavers. It was only in 2010, in Gold Coast, Australia, that the procedure was first used commercially. Six years later, it has not caught on; currently, it’s legal to perform on humans in three Canadian provinces and eight American states. Hilton attributes this to what he calls the “yuck factor”: it seems people are put off by the idea of their liquefied corpse roiling its way through the sewer system.

Yet neither burial nor cremation is any more palatable, says Karla Rothstein of Columbia University’s DeathLab, a multidisciplinary research centre. “The embalming process is really unsettling,” she says. “I mean, if you’re going to be squeamish, what about the idea of draining the body of its fluids and injecting chemicals and plugging orifices and sewing and gluing and clamping?” In the fire, the charred remains of one cadaver can get mixed up with those of the body that went before it. “When people actually find out what ­happens,” Rothstein says, “most don’t want these things done to them.”

Unpleasantness aside, both traditional methods are also environmentally damaging. According to DeathLab research, cemeteries in the United States put more than 3 million litres of toxic embalming fluid in the ground every year, some of which invariably seeps into the soil and contaminates groundwater systems. Building the caskets that (at least temporarily) contain those fluids takes 82,000 tonnes of steel, 2,500 tonnes of copper and bronze, and 71,000 cubic metres of wood annually. Cremation uses fossil fuels and releases toxic gases into the atmosphere. And, while the effluent from bio-cremation can be used as fertilizer, flame cremation ­renders corpses ecologically useless.

According to the non-profit Cremation Association of North America, nearly 200,000 Canadians died in 2011. About 60 percent of them were cremated and about 40 percent were buried. That’s a lot of uselessness—and if greener methods of corpse disposal don’t take, there’s bound to be more ecological potential wasted in the near future. A 2014 report from Statistics Canada shows that the country is ­aging rapidly. By 2030, almost a quarter of ­Canadians will be senior citizens; by 2063, nearly 5 million will be eighty or older. Drew Gray, whose bio-crematorium was the first in the country, understands that it may be repellent to imagine yourself being filtered into some far-flung lake. “But there’s no unqueasy way to go out of this world,” he says. “Alkaline hydrolysis is just a different way of getting to the same result.”

It’s not the only green way of getting there. Options for the environmentally conscious future dead range from primitive (a gunny sack in the woods) to space-age. In 1998, the Swedish biologist Susanne Wiigh-Mäsak invented a new method of disposal called promession, in which the corpse is frozen and dipped in liquid nitrogen, then juddered into fertilizer. The technique is still in development seventeen years on; it’s not approved for use on humans, so testing has been limited to pigs. But ­Wiigh-Mäsak claims her company, Promessa, has received millions of dollars in support from donors and investors, suggesting that interest in green cremation exists.

Still, there are religious, as well as legal, barriers to the process. Catholic and Muslim authorities oppose alkaline hydrolysis, tacitly if not officially. And while neither is likely to be swayed (even regular cremation remains haram for Muslims), the Vatican, at least, has shown a reluctant willingness to adapt to new methods: in 1963, after decades of opposition, it sanctified cremation for believers.

Back in May, when Hilton opened the capsule of his new machine and peered through the metal basket at his first bio-­cremated human, he stood agog. “I had just put a whole person in there, and now all there is, is a skeleton,” he says. “You can’t even eat a chicken wing and get the meat off that clean.” He removed the remains, sodden and minty-green from the liquid in which they had been stewing, and put them on a baking tray and into a convection oven to dry out. After twenty minutes or so, he placed them in his bone press, turning them to dust before wheeling in the second body.

By midnight, the fun was over, the powdered remains bagged up and ready for delivery. But Hilton had taken a photo of his first skull before pulverizing it, so amazed was he by its intactness. “The water circulation is so gentle,” he says. “It doesn’t even take the teeth out of the skull. It’s like a ­Jacuzzi in there.” And who knows: maybe the effluent from that first corpse, filtered and treated and drawn up once more from beneath the earth, wound up in a Jacuzzi for the living. Circle of life.

Graeme Bayliss is the editor-in-chief of TVO.org and a former managing editor of The Walrus.
James Walton

James Walton counts Time and The Atlantic among his clients. 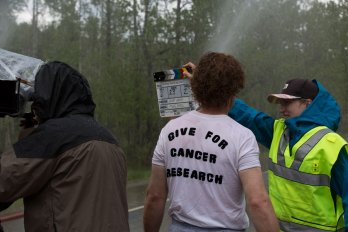