They are disappearing. When I arrived in Toronto in 1978 and first became involved with Armenian issues, there were many survivors still alive. Every year on April 24—the day commemorating the Armenian genocide—we would head to Ottawa. There, survivors would present testimonials, and offer living proof of the systematic campaign of extermination carried out by Ottoman Turks a century ago.

These people would tell their haunting stories—stories that Canadians needed to hear. Unlike the Holocaust, the Armenian genocide has not been universally acknowledged. Turkey—the successor state to the Ottoman Empire—still refuses to admit the historical fact of the event. And with each passing year, there are fewer and fewer survivors left to disprove the deniers with eyewitness recollections.

In the immediate aftermath of World War I, there was hope for accountability. When the Young Turk government collapsed in 1918, many former senior party members fled to Germany, a wartime ally. But the incoming Turkish administration arrested hundreds of those officials who remained in the country—and their collaborators—on suspicion of having participated in the orchestration of the deportations and killings. The suspects were charged with a variety of offences, including murder, treason, and theft. In a series of trials that took place between 1919 and 1920, former Young Turk officials delivered startling confessions and revealed secret documents that outlined the tactics they employed in carrying out their genocidal program.

After the war, the victorious Allies originally had advocated tough punishments for the criminals, as well as an independent Armenian republic in northeastern Turkey. But Turkish nationalists, led by Mustafa Kemal, opposed this. Kemal, who in 1934 was granted the surname Atatürk (meaning “Father of the Turks”), believed the ongoing trials exemplified the desire of foreign powers to tear apart his country. He moved to shut them down and also sought to abrogate the 1920 Treaty of Sèvres, under which Turkey was to recognize Armenia as “a free and independent state.” He promised to help Western nations gain access to the region’s valuable oil fields in return for their support of his cause.

The author Christopher Simpson provides a detailed account of what transpired during this period in his 1993 book, The Splendid Blond Beast: Money, Law and Genocide in the Twentieth Century:

Britain, France, and the United States were at that time vying with one another to divide up the vast oil and mineral wealth of Turkey’s Ottoman Empire. Kemal skillfully played the three powers against each other. . . . Though often overlooked today, the Ottoman holdings were of extraordinary value, perhaps the richest imperial treasure since the European seizure of the New World four centuries earlier. The empire had been eroding for decades, but by the time of the Turkish defeat in World War I, it still included most of what is today Turkey, Iraq, Saudi Arabia, Syria, Lebanon, Israel, Jordan, and the oil sheikdoms of the Persian Gulf. The European governments sensed that the time had come to seize this rich prize.

In the United States, meanwhile, the government’s cynical attitude toward Turkey and the Armenians was captured in a revealing letter from Allen Dulles, then chief of the Near East desk at the State Department. “Confidentially the State Department is in a bind,” he wrote in 1922. “Our task would be simple if the reports of the atrocities could be declared untrue or even exaggerated but the evidence, alas, is irrefutable.” To this day, the US government does not recognize the genocide.

Fortunately, Canada has taken a more enlightened view: in 2004, by a vote of 153–68, the House of Commons passed a resolution declaring that members “acknowledge the Armenian genocide of 1915 and condemn this act as a crime against humanity.” It was a momentous and welcome act. Only twenty-one other nations—including France, Germany, Italy, Russia, and the Holy See—have officially accepted the truth of what happened.

We must remain vigilant in the face of Turkey’s ongoing campaign of denial: the country’s authorities continue to claim that the brutality inflicted on the region’s Armenian population was merely one unfortunate manifestation of the violence that engulfed many ethnic communities during World War I. Even in those Western nations whose governments have recognized the event, media often will include the Turkish position in their reports—or they will hedge their descriptions by stating that Armenians “claim” a genocide took place, as if the issue were still shrouded in controversy.

In fact, there is no controversy: The International Association of Genocide Scholars has said clearly that those who “dispute that what happened to the Armenians in the Ottoman Empire in 1915 constitutes genocide blatantly ignore the overwhelming historical and scholarly evidence.” The noted historian Deborah Lipstadt has written that “denial of genocide, whether that of the Turks against the Armenians or the Nazis against the Jews, is not an act of historical reinterpretation. . . . The deniers aim at convincing innocent third parties that there is another side of the story . . . when there is no other side.”

Time is supposed to heal all wounds. But to be an Armenian a hundred years after the first genocide of the modern world is to know that such healing is impossible while the descendants of the perpetrators continue to deny their role in my own forebears’ suffering. Though the survivors have all but completely disappeared, we—their grandchildren and great-grandchildren—are still fighting for global recognition of the horrors inflicted a century ago during the tragedy properly known as the Armenian genocide.

Atom Egoyan is an acclaimed filmmaker and director.
Ashley Mackenzie 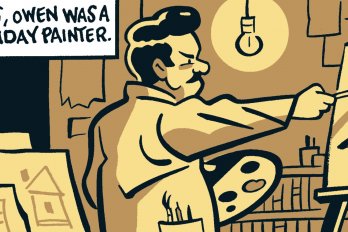