Defining the First Senate of Canada | The Walrus
Skip to content 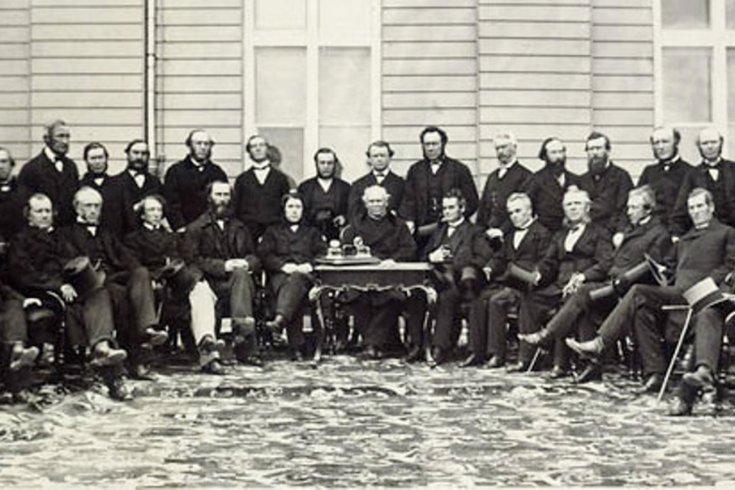 Photograph by Jules I. Livernois

More than almost any other decision of the Quebec Conference, the decision to have an appointed upper house was mocked and attacked from the day it was announced. The opponents of confederation denounced it as evidence of the autocratic and anti-democratic tendencies of the confederation makers, as if their intention was to create an aristocratic upper chamber from which the chosen creatures of the colonial ascendency would thwart the will of the Canadian people forever. Those in the conference, however, were coming to understand it meant precisely the opposite. An appointed house, particularly one appointed by the central government, would always be dignified, ceremonial, advisory—and largely without power. It might be clothed with theoretical authority, like the British House of Lords, to veto anything that came before it. But in the reality of Canadian political culture in the 1860s, and ever after, an appointed chamber could never stand up in a real and concerted way to the will of the lower house, the one given legitimate power by being elected by Canadian voters in proportion to their numbers on a broad electoral franchise. That was what the conference delegates had come to believe was required. On Tuesday morning, October 18, 1864, they settled that such would be their advice to their legislatures.

In defending the upper house during the Province of Canada’s legislative debate on confederation that followed the conference, Alexander Mackenzie, a friend and supporter of George Brown’s and a future prime minister, declared, “It is my opinion that we would be better without an upper house.” Mackenzie had not been a delegate at Quebec City, but he acknowledged that the question there had been “not what is the best possible form of government,” but only “what is the best that can be framed for a community holding different views on the subject.” On that basis, he was prepared to accept an upper house, so long as it was a mere “court of revision,” not an independent chamber. “Hear, hear!” called Brown, “and therefore I accepted as a fair compromise, a second chamber nominated by the [federal cabinet].” The Canadians had insisted on appointment not to make the upper house independently powerful, but to ensure its dependence on the government and subservience to the lower house. It seems to have been understood that it might be awkward for the delegates to declare too frankly that the principal quality they sought in an upper house was its weakness vis-à-vis the elected lower house. During the debates on confederation, a good deal of effort would be expended to demonstrate the dignity and importance the upper house would have. John A. Macdonald liked to argue that since it was impossible to have a hereditary body as in Britain, “the only mode of adapting the English system to the upper house is by conferring the power of appointment on the crown,” which he called “the system most in accordance with the British constitution.” 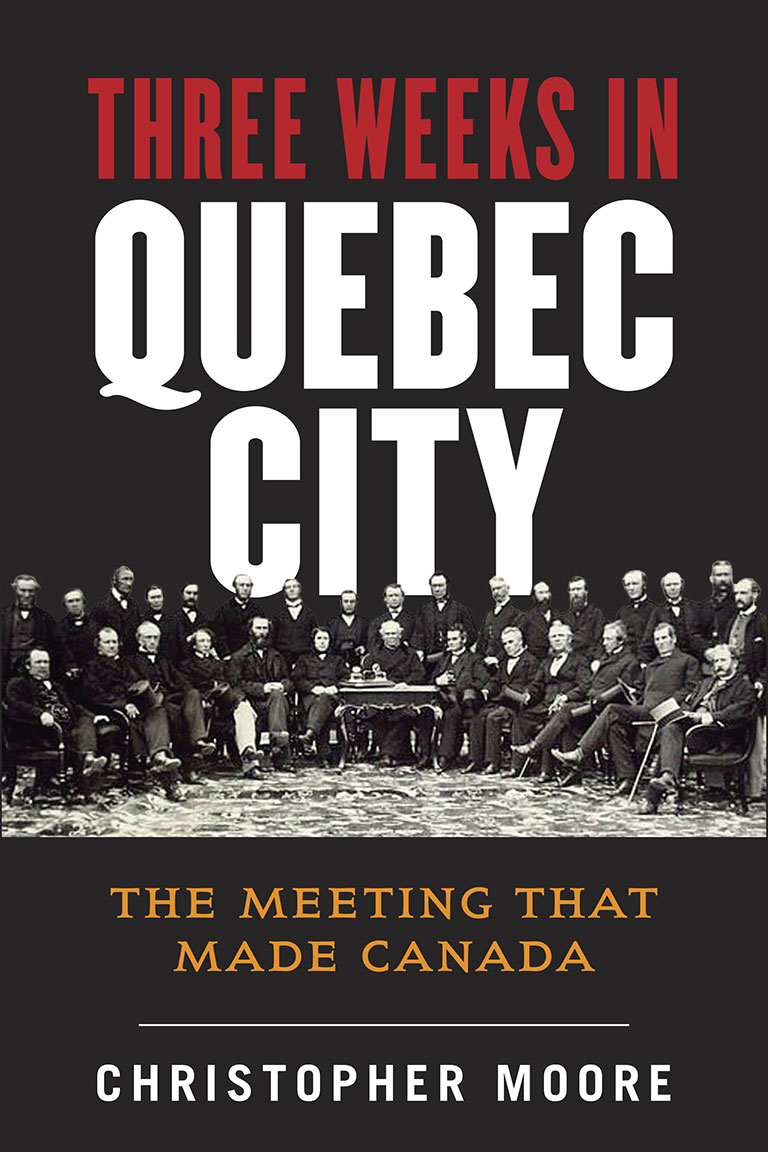 Still, Macdonald was careful to dispel suggestions that the upper house might threaten the authority of the lower. He pointed to the fixed numbers of members in the upper house, a rule that would prevent the government of the day from packing it with supporters in order to have its way in a crisis. The upper house must maintain some distance from the lower house, he continued, “for it is only valuable as being a regulating body, calmly considering the legislation initiated by the popular branch.” Nevertheless, he continued, “it will never set itself in opposition against the deliberate and understood wishes of the people. . . . There is an infinitely greater chance of a deadlock between the two branches of the legislature, should the elective principle be adopted.” By making the upper house an appointed one, the delegates had deliberately prevented that.

With Crown appointment confirmed as the way upper house members would be chosen, Macdonald next presented the conference with a resolution proposing that the dignity and status of the upper house would be guaranteed by requirements that members to be appointed to it had to be British subjects, at least thirty years of age, and possessing real property worth $4,000. No such age limits or property requirements would apply to elected members of the lower house, who would need only the votes of the electorate. With that rule endorsed unanimously, the conference adjourned for the afternoon.

When the delegates met again at 7 p.m., they fell into a long wrangle about how to appoint the first block of seventy-six members of the upper house. This would consume their time and attention until midnight, and again the next day until the afternoon break. Since they had already agreed that appointments would be the prerogative of the federal cabinet, it was an odd issue upon which to lavish another day of their tight schedule, but there were three issues at stake. First, the conference was a multi-party one, and all the delegates wanted to ensure that their own party members had a share in the first distribution of seats in the new federal upper house. Second, the delegates were aware that for confederation to be ratified, support in the upper house of each province would be required, so a proposal that was attractive to the existing provincial councillors would be useful. Third, seven of the thirty-three men in the conference were themselves legislative councillors, and most of them saw themselves ornamenting the new upper house of the new national parliament. As a result, there were many proposals for earmarking seats in the first federal upper house for members of the existing provincial ones.

George Coles was one of the few who argued that all citizens should be eligible for appointment. He denounced as corrupt the attempt to buy the provincial upper house members with these first federal appointments, but he got little support. The delegates agreed that priority for appointments to the first upper house would go to existing provincial councillors. In a nod to the bipartisan unity that had brought opposition as well as government members to the constitutional conference, they agreed that in the first distribution of seats, government and opposition councillors would be appointed in proportion to their existing numbers in the provincial upper houses. The first Senate of the new Dominion of Canada, in other words, would be appointed on a bipartisan basis—but only the first one. They fought over this problem until midnight, and again for most of the next day before they had it sorted out.

Seven-thirty p.m. on Wednesday evening, October 19, and finally the conference was done with the upper house. By ensuring that it would never challenge the representative lower house of the new federation, the delegates had laid in place a cornerstone of Canadian parliamentary democracy. Yet their choice would sustain a long-lived legend to the contrary: that by proposing an appointed upper house, they were indulging in fear and hatred of democracy itself. “They were not democrats” would become a much-repeated dismissal of confederation itself.

If democracy is measured simply by how many people vote, the delegates certainly fell short of the democratic standard. They did not want an elected upper house. They looked skeptically at referendums and plebiscites, certain that it was in legislative debate, not in mass votes on yes/no questions, that the needs of the people could best be determined. The “household franchise” that they mostly upheld, while it gave British North America one of the broadest electorates in the world of the 1860s, certainly fell short of the concept of voting as the right of all adult citizens. Leaders of the confederation movement sometimes rejected the very word democracy itself, though only when they took it to mean mob rule or used it to describe governments that, once elected, could rule tyrannically, accountable to no one.

The confederation makers put less emphasis on how many voted than on who was accountable to whom. They were determined that the governments of their new federation should be accountable, not just to occasional elections but constantly, held accountable by lively independent legislatures that they believed to be representative of the people. They were parliamentary democrats, and their choices about the upper house were proof of that commitment.

Christopher Moore is a Toronto-based writer and historian.

New Brunswick’s Mystery Disease: Why Did the Province Shut Out Federal Experts?