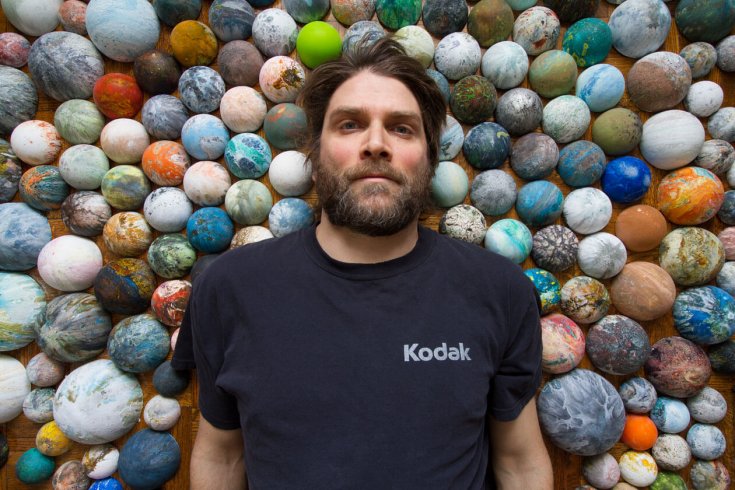 There is a box under the work table in Adam Makarenko’s Toronto studio. Like the rubbish bin of some unhinged god, it contains hundreds of planets, each about the size of a fist.

This is Makarenko’s sculptural library of imagined exoplanets. His works are modelled on real worlds that orbit stars light years away. Each of his creations—rocky surfaces streaked with blue, gas giants with swirls of white and red—draws on the sparse data astronomers have collected, combined with the principles of planetary composition we have learned from our own solar system.

When these exoplanets are photographed against a dark backdrop, or juxtaposed against an elaborate set seething with lava or coated in crystalline spires, the images look as though they were beamed from another part of the Milky Way.

In reality, each exoplanet is made of plaster or Styrofoam that has been covered in glue or paint to add texture and colour. ­Makarenko’s work shows us that ­advanced technology isn’t always enough to bring humans to other worlds—exploring the galaxy requires imagination, too.

The existence of planets outside our solar system was long hypothesized, but proven only in 1992, when astronomers Dale Frail and Alex Wolszczan published their discovery of two hunks of rock ­orbiting a dead star 2,300 light years away. Since then, 3,472 exoplanets have been found, and NASA estimates that approximately one trillion exist in our galaxy alone.

Nowadays, the discovery of a new ­planet typically goes unnoticed. But in February 2017, NASA announced that three Earth-like worlds had been found in the habitable zone of a star system about forty light years away; in the impossible scale of space, that’s practically in our backyard. They summon to mind the possibility of life existing somewhere else in the universe—another species, or one day, ­perhaps, our descendants.

It’s a nice thought, but premature. “Discovery” is an abstract term in this context. The vast majority of exoplanets have been observed only indirectly, either by watching for a star’s “wobble” (changes in the wavelengths of its light caused by the gravity of a nearby planet) or using a telescope to keep track of minute alterations in the amount of light recorded from a star as a planet passes in front of it. What these exoplanets ­actually look like remains unknown.

In a recent essay for Atlas Obscura about the history of “space art,” author George Pendle observes that, while photog­raphy usurped illustration in a ­number of ­scientific disciplines throughout the nineteenth century, outer space remained an area “too far away to be photographed yet too thrilling to be left ­undocumented.” Art and science have a symbiotic relationship: art inspires new generations of researchers, while new discoveries inspire more artists.

Take, for example, one of the first detailed artistic creations of these faraway worlds: the cover of The Conquest of Space (1949), illustrated by American painter ­Chesley Bonestell. The ­picture shows a rocket perched on a shadowy, moun­tainous moonscape. In the foreground, suited figures ­assemble a sci­entific instrument. The image helped popularize the idea of manned space ­travel—even ­rocket pioneer Wernher von Braun was a fan of Bonestell’s work. At the time Bonestell was drawing these scenes, the idea of ­humans going to the stars was regarded with skepticism (NASA launched its second monkey into space that same year; it did not survive). Only twenty years later, the first astronauts touched down on our moon.

There are simpler, and more realistic, ways to show distant objects than by creating intricate miniatures. Computers have become the standard method (the producers of 2014’s Interstellar hired a physicist to help create the film’s CGI black hole). And the James Webb Space Telescope—a more powerful successor to the Hubble—will launch in 2018, ­giving scientists the ability to directly examine hitherto unseen exoplanets.

Makarenko believes that his sculptures, physical planets that can be moved and touched, provide something equally ­important. “There is something tangible about the miniature versus something that is made on the computer—not necessarily better, but different,” he writes. “It makes these far-off places appear to be more real for me, because they are sculptural forms. The images are literally transporting the viewer to a physical place.”

It will take decades for humans to reach Mars. And we may never set foot on any other planet. But in Makarenko’s studio, at least, it is possible to grasp entire worlds.

This article originally appeared in the June 2017 issue.

Alex Tesar is a writer and editor who lives in Halifax with his partner and their dog, Dr. Tony Spaghetti.
Adam Makarenko

Adam Makarenko is an artist, photographer, and filmmaker. He is currently working on two photographic series on space exploration.

The Rise and Fall of Toronto’s Classiest Con Man

With My Children, Learning to Love the Little Things 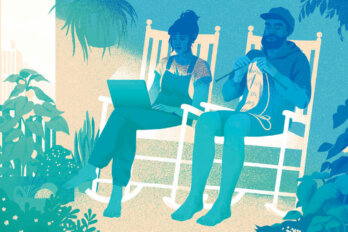 Meet the Frugal Millennials Planning for Decades of Retirement