The Myth of the Lone Genius | The Walrus
Skip to content 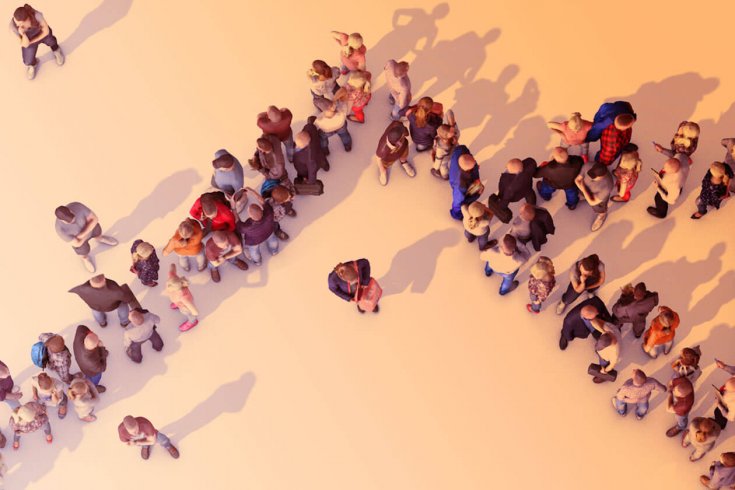 In an episode of 30 Rock, Jack Donaghy, the CEO of NBC, asks a group of writers what their dads tell their friends that they do. One writer replies, “Surgeon.” Another, “Optometrist.” The third replies: “Died.”

There is, of course, something mortifying about claiming to be a professional writer. “Oh, like for Buzzfeed?” a generous relative might ask at a family event. “No, I write poetry,” you might answer. Cue the silence of aunts and uncles as they gaze down at their plastic cup of wine and brownie-on-napkin trying to devise a follow-up that doesn’t scream, “Your poor mother.”

It’s with a similar sense of mortification that I read Jason Guriel’s recent comments on the importance of literary isolation for the writer. The thrust of his essay is his worry that literary community has “displaced the idiosyncratic recluse.” In place of the individual genius, whose talents are honed in the crucible of their solitude, we have the writer as community-builder, as public figure, as Twitter pep talk generator. The workshops, readings, seminars, book launches, and social drinking that often comprise the bulk of authorial life all mean that “writers have become more entangled than ever.” Add to that the ever-connectedness of social media, and “you might as well accept that you’re a node in a network.”

Guriel also worries that this produces not only similar(ly lame) works, but also a kind of groupthink. Differences of opinion are perceived as violence against the community’s well-being. One must never write a bad review, one must get along with the other writers, and one must praise everyone’s work, no matter how wretched. Even when a work is complete and utter shit, the reviewer must remember that even shit is necessary for “nurturing the community garden.” Indeed, insofar as Canlit success depends upon currying favour with a host of granting institutions, editors, and publishers, being a good community member sometimes seems often more important to a writer’s success than writing a good book.

Guriel is partially right about how community can silence dissent. Anyone who witnessed the attempted character assassination of Margaret Atwood after her role in the Galloway affair understands the danger of such communities. Andrew Potter was recently forced to resign from his position as the head of McGill’s Institute for the Study of Canada for an allegedly controversial article arguing that Quebec suffers from social malaise. Even Hal Niedzviecki’s now infamous editorial on the literary merits of cultural appropriation was surely idiotic, historically amnesiac, and undermined the important work of the very Indigenous writers featured in the magazine. But does that require that he is forever labeled a persona non grata? In the aftermath of the editorial, the managing editor of The National has been reassigned for joking that he would “throw in $100” for a cultural appropriation prize. Author Sean Michaels joined a chorus of voices publicly calling for Jonathan Kay’s dismissal because “He has alienated and goes on alienating entire generations…of Canadians.” It wasn’t so long ago that alienating Canadians was considered our most Canadian literary trait. Now it is grounds for cultural excommunication.

Guriel is mistaken, however, in one thing: the isolated genius he celebrates in his essay—the one who follows their nose and is often misunderstood by an unappreciative society—hardly operates outside of the establishment. His or her existence is, in fact, one of the most well-trod beliefs of that establishment. Guriel’s vision of the “idiosyncratic recluse” not only emerges out of his community’s conception of what an artist should be, but is part of a tradition that has restrained other artistic visions.

An example: editor and critic John Metcalf has long been a gadfly in Canadian literature. A kind of pre–internet troll, Metcalf missed no opportunity to attack beloved Canadian writers, insisting that authors such as Jane Urquhart, M.G. Vassanji, Ann-Marie MacDonald, and Timothy Findley were incompetent hacks. Concerning Vassanji’s ineptitude, Metcalf writes, “There’s no debate, there’s no question … It’s the opinion of anybody that is literate.” Metcalf thus positions himself as the definitive arbiter of literary merit.

What Metcalf’s memoirs clearly demonstrate, however, are the very clear ways in which his vision of artistic merit has been shaped by his location in a particular literary community. He describes his life as a young Jack the Lad in Carlisle, England, where he was an eager and insatiable reader. As a boy he worked in an auctioneer’s yard and was happily paid in books; his father was a minister who collected Conrad, Wilde, and Yeats; his mother read Margery Allingham, Agatha Christie, and Dorothy Sayers. Metcalf’s biography attempts to establish his authority as a natural reader, someone with an innate critical eye: “When I was a child I read quickly, usually taking about two hours to finish a book. On wet days I read my ration of library books in one gulp and often returned in the evening for three more.”

While Metcalf has the power and privilege to pretend that his literary identity is strictly of his own making, his memoir inadvertently demonstrates how his unique blend of Northern- English masculinity, Methodist conservatism, and British working class pride produced his notion of aesthetic excellence. A debate about good writing is always a debate about the collective standards by which an artistic work will be judged. And in his expectation that Vassanji accord with his particular conception of aesthetic excellence, Metcalf fails to recognize the powerful cultural influence behind the supposedly cant-free, independent-minded quality control he wants to exert.

Similarly, the aesthetic excellence that Guriel attributes to the isolated artist—the true voice of artistic vision—may be a Western fantasy. The myth of the individual writer, railing against the restrictions of a community that would bind his talents, is one that writers like Guriel are able to invent because his own indebtedness to community remains implicit and invisible. Many other writers simply don’t have the luxury of believing that there is a voice outside of community; community participation and aesthetic excellence are not merely related—they are politically and culturally inextricable.

This is not to praise community over and above the voices of individual writers. As Guriel argues, and as the cultural appropriation debates have demonstrated, community can be a coercive and silencing force. Furthermore, a number of writers have eschewed their perceived responsibility towards community or the literary expectations of their community. Evelyn Lau, for example, has been accused of having “offended the Chinese-Canadian community collectively” because her writing includes alleged “negative stereotypes” of Chinese Canadians. Similarly, there is no love lost between poet George Elliott Clarke and critic Rinaldo Walcott in their war of words over the state of black Canadian writing. The late Austin Clarke bristled against the entirety of the Canadian literary community, insisting that “There are no Canadian critics qualified to look at the things I write.”

Yet what Guriel and Metcalf fail to recognize—and I would include proponents of cultural appropriation here, as well—is that their particular definitions of artistic life and aesthetic excellence emerge from their own community memberships while masquerading as universal measures of individual talent. Guriel is a member of a particular community that has long set the terms by which artistic genius and literary excellence are measured. Like every other community, it has a particular idea of what constitutes good writing; however, unlike other communities, it has the power to impose its ideas on others.

The Canadian literature community has a history. Part of that history is that notions of aesthetic excellence have gone hand-in-hand with the silencing of Indigenous voices and the appropriation of Indigenous culture. Those ideas of aesthetic excellence have been used to tell black writers that their works are inadequately literary or inadequately Canadian or written in a strange dialect. They have been used to tell queer writers that their books are indecent, lewd, and illegal. Those same notions have been held up to South Asian writers when they are asked why they don’t write about Canada, and then used to ignore those same writers when they do.

Put simply, the history of Canadian literature is the forgery of a white Canadian definition of literary excellence presented as the universal definition. To pretend otherwise, to ignore the way in which definitions of the literary enforce a particular community’s control over the narration of a nation, is to engage in a willful cultural amnesia that forgets the numerous flashpoints in our national literary history. It is only recently that marginalized voices have been able to speak back to the dominant voices in Canadian literature and they have done so through the strength of community. In 1990, Marlene Nourbese Philip was told to “Fuck off” when she argued that black people were underrepresented in PEN Canada. Individually, Philip did not have access to the forms of power that would enable her to confront PEN Canada’s racial bias; collectively, as part of Vision 21, she was able to do so.

What these recent controversies demonstrate is that new groups have emerged to disrupt the monopoly of white Canada to define literary and cultural taste. Community offered a space for Indigenous people to discuss their responses towards Joseph Boyden. In this and many other respects, social media—far from an “entanglement”—offers a way of speaking back to and changing the white literary establishment.

I don’t expect Guriel—a critic willing to “bloody” a book—to suddenly believe that all these multiple communities require meaningful and civil dialogue about how we we address one another and how we speak for ourselves. But if he’s ever tired of being alone, he’s welcome to join us.

Paul Barrett is an Assistant Professor in the Department of English at Concordia University. and the author of Blackening Canada: Diaspora, Race, Multiculturalism.