With My Children, Learning to Love the Little Things | The Walrus
Skip to content 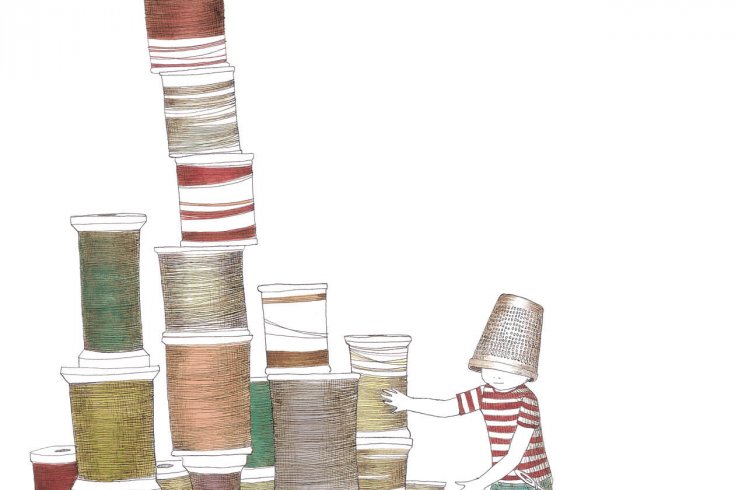 Illustration from When You Were Small (2006)

The toronto public library’s Osborne Collection of Early Children’s Books contains some 90,000 items, including rare and notable titles. My own children, though, are mostly interested in just two things: an Edwardian-style dollhouse whose furnishings are detailed down to wee grapes on the dining table, and a copy of The Twelve Horary Signs—Chinese Zodiac, which was, for a time, the world’s smallest book at 0.95 millimetres by 0.95 millimetres—no bigger than a poppy seed. You need a microscope to read the tiny text. Without fail, my two daughters climb up on a stool to look through the lens and marvel at the miracle of the book’s existence. When a child encounters the small, she instinctively knows: here is something that is meant for me.

Sara O’Leary, who splits her time between Hudson, Quebec, and St. Martins, New Brunswick, is fascinated by these themes of youth and size and scale. Her interpretation of childhood is the premise of the newly released You Are Three (which was preceded by You Are One and You Are Two). The trilogy celebrates toddler milestones. We see the one-year-old taking his first steps and learning to fetch a book when he wants a story; the two-year-old choosing her clothes, singing songs, and giving hugs; the three-year-old, adept at make-believe, making friends and beginning to create a life outside her family.

The series, illustrated by Karen Klassen, was originally pitched to go up to age five, but was trimmed when O’Leary realized there was something unique about the first three years: that’s when a parent gets to narrate a child’s experience of the world. Three is the age when a child starts to ask questions about her past—that expanse of time she witnessed but cannot conjure up. She tells her own stories, and memory and self-awareness begin. “You are still our baby but you are also your own person. We love to hold you close and we love to watch you run,” O’Leary writes in the final instalment.

In this way, the You Are books act as a spiritual sequel to O’Leary’s earlier trilogy: the Henry series, illustrated by Julie Morstad. Those stories feature a young protagonist who asks his parents for information about his past. Henry’s father and mother offer imagined, fantastical stories of the adventures he had during his early years. Like so many children’s books, they testify to the possibilities of tiny things.

In When You Were Small (2006), Henry’s father tells his son stories of long-gone days when Henry had, apparently, been the size of the characters in Mary Norton’s The Borrowers—those miniature humanoids small enough to fit inside a pant pocket. O’Leary’s notion of smallness resembles what writer Natania Rosenfeld, author of the essay “In Praise of the Small,” terms “grandiosity writ tiny.” O’Leary shows how the small can be brave and noble. When Henry was little, he was a knight on the chessboard. “When you were small,” his father tells him, “you rode on the cat’s back like you were an emperor and he was an elephant.” Henry wears a thimble for a helmet while carrying a darning needle as a sword; he even becomes king of a castle (albeit a toy castle from an aquarium).

“When I was small” is the way that so many of my own three-year-old’s nostalgic reflections begin—reflections on a time she doesn’t even remember. While the stories in the Henry series are fanciful, for my daughter, so too are the facts disclosed in O’Leary’s seemingly straightforward You Are series: How could it be that there was a period of her life when she couldn’t walk? Couldn’t talk? That once upon a time, she didn’t even know her own name? For its intended audience, the shrunken-boy premise of the Henry books is not so farfetched.

O’Leary’s stories ride on the coattails of a long tradition of wee things in children’s literature: Tom Thumb and Thumbelina, Peter Rabbit and the many creations of Beatrix Potter, Lewis Carroll’s Alice at her very littlest. Smallness has a way of slipping into spaces, gaps in the floor and gaps in the mind. (When was the last time you peered beneath your floorboards?) The domestic becomes enchanted. There are worlds within worlds that adults can’t glimpse.

Few remember the Brobdingnagians, that race of giants from Gulliver’s Travels, but their miniature counterparts from Lilliput became some of Jonathan Swift’s most famous creations. As Erik Erikson writes in Childhood and Society, “Every adult…was once a child. He was once small. A sense of smallness forms a substratum in his mind, ineradicably.” Everything after small is measured against it; “small” and “little” become synonymous with youth, the experience of living in an outsized world tied into childhood itself. As English professor Jerry Griswold notes in Feeling Like a Kid: Childhood and Children’s Literature, size difference is a concept that children can identify with, living as they do in a world that’s not constructed to their scale.

Smallness in kid lit is often used as a metaphor to explain qualities of cruelty, mercy, and vulnerability. Diminutive beings—such as the mice lurking at the Borrowers’ gates—sometimes attempt to dominate those who are even smaller. Consider how the toys in Rumer Godden’s The Dolls’ House (1947) exist in thrall to the children who play with them (“It is an anxious, sometimes a dangerous thing to be a doll. Dolls cannot choose; they can only be chosen; they cannot ‘do’; they can only be done by”).

But there is another side to smallness—wiliness and tenacity. “In the blink of an eye, you are up and down the stairs,” writes O’Leary in You Are Two. Smallness is what allows Peter Rabbit to evade Mr. McGregor’s grasp. It’s what gives the Borrowers opportunities to construct whole worlds from items pilfered from humans (matchboxes become chests of drawers; the end of a fly swatter is a gate to keep out the mice). Such cleverness is the chief appeal of O’Leary and Morstad’s series, too: Henry takes his bath in a teapot; he brushes his hair with a toothbrush; he uses a teabag as his pillow.

The trilogy’s second story, Where You Came From (2008), addresses Henry’s more profound question: How does a person come to be? In the spirit of the first volume, father and mother tell tales of a baby brought by crows and fairies, found floating in a basket down the river, and even discovered playing in a pet-shop window with a litter of frisky puppies. To a child, each of these origin stories is as plausible as the “real” answer, if not more so. “Your mother and I both dreamt you. And then you came true,” O’Leary writes as the final explanation. “First there were two of us and then we were three.” Henry is an agent in the construction of his parents’ tales: he keeps prompting their retelling.

In the trilogy’s final book, When I Was Small (2011), it’s Henry’s mother whom the boy is asking for a story (“Tell me about when you were small, too”). The book is focused less on Henry’s perspective than it is on his mother’s: she shares her own stories of a childhood wherein she was, purportedly, also physically tiny (“my best friend was a ladybug”). She then tells her son, “When I was small …I couldn’t wait to grow up. Because I knew one day I would have a small boy of my own.”

“And you could tell him stories,” Henry interjects; the facing page features a mini Henry side by side with his tiny mother.

“Yes, says his mother. And I would tell him stories, because in stories we can be small together.”

This article originally appeared in the June 2017 issue under the headline “Little Truths.”

Kerry Clare is the author of Mitzi Bytes, published by HarperCollins Canada in March.