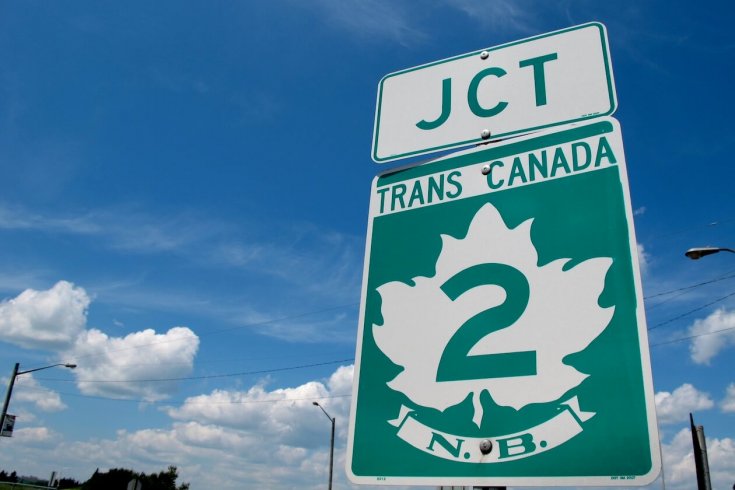 It is 1981 and I am working the summer at a twenty-four-hour truck stop on the Trans-Canada at Lutes Mountain, just outside of Moncton. During the day it’s insanely busy. At the front, Canadian and American tourists fuel up at the start of a long journey west, while others, “locals,” top up their tanks and buy snacks for the two-hour trip to Saint John or Fredericton. Occasionally somebody stops for directions, having missed the turn-off to the 126 north up to Renous, where the prison is. In the back we wrestle huge diesel hoses to feed the twin 800-litre tanks of a seemingly endless line of thundering transport trucks.

It is my first job. I am sixteen, physically underdeveloped, socially awkward and perpetually terrified. I am intimidated by truck drivers, by Mike, my muscular Ayn Rand-loving manager, and by my co-workers, more than one of which makes promises to “smash” my “fucking face in.”

Still, there are moments of happiness. The rush, which at first exhausts me, eventually energizes me, and I find the joy in running from car to car, from front to back, learning the dangerous, exhilarating science of fueling more than one truck at a time. (Lacking auto shut off nozzles, three simultaneously unattended hoses demand full powers of observation—the price of a mistake, a yard full of diesel.)

And not all of my co-workers are physically aggressive. Some are a pleasure to work with. There’s the young Acadian, so honest and hardworking he hands tips back to customers, and the long-haired, laid-back bass player, who smilingly tolerates my ignorant and enthusiastic musical opinions.

And then, of course, there’s Greg. For whatever reason, we almost always end up working together, which is a relief to me. Greg is focussed, unflappable, with an easy sense of humour. We fall into a natural rhythm, never stepping on each other’s toes, always there for the other guy. When I start my shift and see Greg, I’m relieved—I know things will be all right.

But there’s one thing I don’t know about Greg, one thing that I only find out years later. Greg, you see, Greg is a killer.

There is a whole genre of books, movies and TV shows built around the idea that killers can always be spotted. Oh, not by everyone. Certainly not by the average person, not by the layman, but by a team made up of particular brands of scientist. Rest assured, they counsel us, we can always tell.

Do me a favour. Open up another tab in your browser and search the phrase “How to spot a serial killer.” You will find literally millions of articles. Some will be on pop culture and lifestyle sites, others on sites that are, more or less, scientific. Whatever the source of the article, or the credentials of its author, I can guarantee you one thing: at the end of a long list of characteristics, of signs, of clear indicators (which are, of course, gleaned only after the fact) will be a disclaimer that unravels the whole premise.

Serial killers, you see, are manipulative people—consummate actors, able to convincingly express the required empathy that they never, ever feel. They know how to fit it. So the cliché that fits is an older, less reassuring one. How do you spot a serial killer? They’re the one that you least expect.

It’s 1985, and I am done with university, done with summer jobs, and living in Halifax. I am working at an office, at the start of a potentially lucrative professional career. The work is in many ways easier, but I am paid more, a lot more. Although I don’t know it at the time. Greg is also in Halifax. He arrives by train on December 1, 1985, about seven months after me. At this point he has already killed at least one woman. He has arrived, his diary will later show, with “the urge to kill a faggot.”

After checking into the Sterling hotel on Barrington Street, Greg then heads to the Misty Moon, a well-known Halifax cabaret, for an evening of drinking. On his way back to the hotel, he meets Brenda Lee Garside, a seventeen-year-old sex worker. Although he initially rejects her offer and starts walking away, she calls after him, “What’s the matter—you got AIDS?” He returns and takes her to his hotel room. After she undresses and gets into bed, he strangles and smothers her to death.

Another in a long line of seemingly endless summer days, and Greg and I are run off our feet, while our co-worker, a tall lazy man, saunters up to the occasional car between smoke breaks.

Late in the shift, Mike arrives and comes to me:

I hesitate and, wincing, say, “Greg and me.”

An angry Mike takes the other guy aside and yells at him, leaving shortly afterwards.

For the rest of the shift, my co-worker gives me dark, threatening looks.

I finally speak to Greg: “What did Mike say to you?”

I have made an enemy, while Greg is now neither a snitch nor a problem employee.

There is a kind of test here. I fail, while Greg passes easily.

When Greg arrives in Halifax, in his Toronto apartment he has left behind the body of Faith Constance Russell, thirty-eight, his girlfriend, who he strangles during an argument.

In his diary, he writes, “Killing Faith doesn’t seem so terribly wrong.”

On December 27, 1985, after a nation-wide manhunt Greg turns himself in to Winnipeg police. In my local tabloid, the Halifax Daily News, under a lurid headline, I see a photograph of my old workmate.

“Did you hear about Greg?”

“His eyes. When he got angry. I could see it in his eyes. Those were killer’s eyes.”

Mike says he could tell. That he knew somehow. But how could he know? What did he know? If you had asked me at the time who I thought was capable of killing two women, I would have said John, who boasted that he had hit his girlfriend “only once, and only because she deserved it,” or maybe even the pleasant-enough co-worker who spent weekends so high on a mixture of drugs that he could remember nothing since Friday. But I wouldn’t have suspected Greg. To me, there was never a sign. In fact, I wasn’t sure that I had ever seen Greg angry.

But that isn’t true. I had seen Greg angry, but I’d forgotten.

Two weeks before I start at the truck stop, my friends and I, emboldened by vodka stolen from a parent, sneak into a Moncton bar to see a band. Wearing our Value Village best, we pogo enthusiastically in front of the stage.

Sitting at a front table is Greg, watching us with a cold irritated expression. He taps my friend on the shoulder and says, “I can appreciate what you guys are doing, but we’re trying to watch the band.” I don’t hear what my friend says, but later he tells me he thinks things have been settled when Greg suddenly aims a kick at his balls.

Although I know that there is no further fight, I don’t remember what happens after that. In fact, I won’t remember much of that night until more than a month later, when I turn to Greg in the middle of a shift and say “Wait . . . you were in the bar that night, with the band . . . ”

Greg smiles and says, “Yeah, I wondered when you were going to say something.”

“I didn’t remember till now. I didn’t realize when you started that that was you.”

He gives me a funny look. “Oh, I recognized you right away and I assumed you recognized me. I thought maybe we were going to have a problem.”

But we never did.

At Greg’s Halifax trial, a report by Toronto psychiatrists describes him as “pugnacious” with a “irascible temper and a vengeful attitude.” He’s “paranoid” and “oversensitive to criticism.”

Did my friend, did I, escape? If Greg and I had had a “problem,” what would the result have been? As far as I know, I was never in danger. I, well, I liked Greg, and perhaps more importantly, as far as I could tell, he liked me.

Or was this an illusion, a symptom of the ability to smoothly play social games, a necessary camouflage for a personality built on murderous rage? Is the Greg I remember working with even, in any sense, real?

On May 4, 1987, Gregory George Ashford was sentenced to life in prison by the Nova Scotia Supreme Court for the murder of Brenda Lee Garside.  This followed his February sentencing in Toronto of life in prison with no possibility of parole for sixteen years for the murder of Faith Constance Russell. Although police initially suspected him of killing other missing women, these were the only charges ever laid. As of now he remains in Dorchester Penitentiary in New Brunswick, a forty-minute drive from the truck stop where he and I pumped gas and diesel, some thirty years ago.