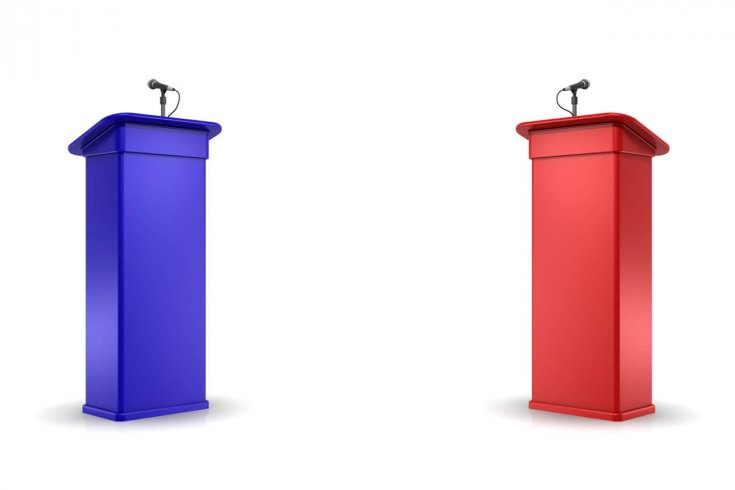 In early September, Aislin Flynn received a call from a producer at CBC’s flagship news program, The National. It was two weeks before the first US presidential debate between Hillary Clinton and Donald Trump, and the show was looking for an on-air expert. Flynn assumed they wanted recommendations: it didn’t occur to the twenty-two-year-old undergraduate student at the University of Toronto that she could be the one they wanted for the show.

Since the call, Flynn has become the face of the American presidential debates to many Canadians. For the past two years, she has been in charge of coaching Canada’s national high school debate team, a group of the five most formidable teenage debaters in the country. The national team represent Canada at the World Schools Debating Championship each year, where they face debaters from around the world, including Australia, Singapore, and Greece. Flynn is the youngest woman ever to hold this position. Under her leadership, the Canadian team came second at the 2016 world championship held in Germany last July, narrowly losing to Team England in the final round.

Flynn is not the typical political strategist you see on CNN discussing Trump or Clinton’s performances. She’s never worked for, let alone masterminded, a political campaign. She studies film not political science. What Flynn does know, however, is what good debating sounds like. “What we’re seeing in the current presidential debates is not the debating I know,” she says. “There is very little substantive clash on policy, and when it does happen, it only scratches the surface.” In her role as a high-profile debate commentator, Flynn has recorded radio and television segments dissecting Trump and Clinton’s debating styles, hoping to educate Canadians on what makes a truly coherent argument (Hint: It’s not just interrupting your opponent).

Flynn was born in North Carolina—she holds dual citizenship—before moving to Halifax, Nova Scotia, with her family when she was two months old. At fifteen, she joined the Sacred Heart School debate team, and soon fell in love with the art of persuasion. From that point on, she devoted herself to the study of all things related to debate. In high school, Aislin won the Nova Scotia Provincial Debating Championships, and secured a coveted spot on Canada’s national high school team in 2012. Flynn has continued her competitive debating at the university level, winning numerous debates for U of T, including the prestigious Yale Invitational Tournament.

“Aislin is a one-of-a-kind debater,” says her U of T debate teammate Manu Goswami. “She can quickly analyze what aspects she needs in order to become victorious.” But for Flynn, it’s about more than just winning her own debates, but about teaching people debate literacy—understanding whether an argument is sound. It involves the ability to spot logical fallacies, identify unsubstantiated claims, and recognize meaningless sound bites. It is having the capacity to determine whether someone is spouting hot air, or actually making a point.

Compared to previous elections, Flynn laments a decline in substance in this year’s presidential debates. While the basic format of two candidates opposing one another for ninety minutes resembles the presidential debates of the twentieth century, the content does not. Gone are the days when the events were about comparing and contrasting the candidates’ respective plans for their country’s future. Today, debates devolve into claims that one’s opponent does not “look” presidential, or repeating a fat joke he told twenty years ago.

However, Flynn warns Canadians not to feel smug. In her opinion, the quality of the leaders’ debates leading up to the 2015 Canadian election were just a superficial discussion of ideas that proved woefully inadequate as a tool for educating voters.

On The National, Flynn has been interviewed by Peter Mansbridge about the difference between Trump and Clinton’s styles. On her first appearance, Mansbridge showed five clips of the candidates speaking, and Flynn explained the strategic choices they were making to appeal to voters. Reflecting on her interview, Flynn says she found it important to explain how Trump “buries his lies by following them up with things people can believe and get behind, which is why he gets away with lying so much.”

By contrast, “Clinton excels at dismissing what she believes to be frivolous challenges to her,” Flynn says. This perspective may explain to followers of American politics why Clinton never seems bothered by her opponent’s wildest attacks, like his insistence that she has been fighting ISIS unsuccessfully for her entire adult life.

On her second televised appearance, Flynn went on The National in a pre-taped segment with her students from the National High School Team. They discussed how Clinton made herself look more presidential by emphasising how much she “prepared” for the debate, and how she gained the upper hand by using humour as a means of “disarming” the audience. They were impressed by the moment where Trump lamented the US federal debt, and Clinton shot back, “Maybe it’s because you haven’t paid any federal income taxes.” Flynn believes integrating wit into a debate keeps the audience focused and primed to listen.

The whole purpose of having electoral debates should be to help illuminate voters’ decisions with meaningful discourse from the candidates, Flynn says. But the post-mortems on cable news are more fixated on Trump’s sniffles or Clinton’s shimmy. When professional political commentators fixate on such superficialities, it leaves little room to dissect each candidate’s stance on important issues such as healthcare, the economy, or security. Flynn eschews commenting on details like wardrobe choices, pacing, or hovering. Instead, she believes a debate should be judged primarily on substance. “I don’t think a well-delivered, weak argument should ever beat a really strong, logically sound argument,” she says.

Debating is one of the cornerstones of democracy. We argue over bills in legislatures before they become law, and we decide who gets elected to debate those bills with yet more debates during election season. Discussing an issue in an open and mature way—weighing the pros and cons of differing perspectives—is the means to achieving effective government. And yet, few people are taught formal skills. When the public watch political debates, they often don’t know how to evaluate the validity of an argument. Most viewers at home have not been taught that a valid argument must contain both a premise and proof, or that passion is not a substitute for logic.

Flynn sees the American election as a reminder of how we should ramp up our own debate-related education to become more debate literate. While extra-curricular debating programs thrive in some public schools, and most private schools across Canada, there are countless students who graduate without encountering any form of meaningful training in how to participate in, or adjudicate, a formal debate.

Beyond maintaining robust democratic political systems, Flynn argues debate is an invaluable activity for fostering personal development. “It’s great because you can identify internal hypocrisies,” she says. To prove her point, she cites the example of a resolution she once received on the topic of whether women should use cosmetics. She now believes exploring this made her question whether she freely chooses to wear makeup, or if other factors compel her into thinking she must.

A user of makeup herself, Flynn ultimately won her debate on cosmetics by making argument that the insidious nature of the multi-billion dollar beauty industry makes women believe they are freely choosing to wear makeup when they are not. Flynn recalls how she persuaded the audience that even strong, modern women can end up in the pocket of the beauty industry, due to manipulative ad campaigns that target their beauty insecurities. Regardless of where someone stands on a particular issue, this kind of lucid argument is hard to find in this year’s presidential debates.

Sarah Sahagian has written for the Huffington Post and xoJane.