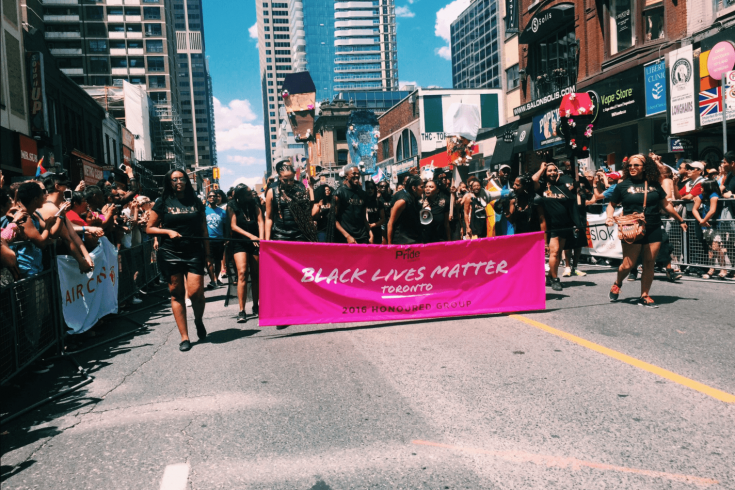 A protest broke out at Toronto’s Pride parade on Sunday, arresting its already sluggish progress through downtown streets for a half hour. The standoff was resolved when the CEO of Pride agreed to sign off on a list of demands from a noisome black activist group, doing so with a flourish of a giant feather quill pen seemingly borrowed from a Restoration pageant.

What is surprising about this series of events is that it is surprising at all. If anything, this agitprop spasm injected a welcome bit of spontaneity into an event that year after year features a giant inflatable Viagra pill and a conga line of shirtless muscle-boys promoting Trojan condoms and the Ontario Lottery and Gaming Corporation.

And at least the boys provide something to look at. The bulk of the parade consists of flat bed trucks of garage bands drawn from the membership of unions, associations and political parties interspersed with small mobs of ordinary looking people carrying signs reading “I am a lesbian accountant.”

This year’s participation reached such a crescendo of banality it featured the Bookmobile from the Toronto Public Library, a listlessly decorated truck from U-Haul, a car honouring the Communist Party, and a mascot representing the GO public transit service (for the record, a bear completely lacking in gay irony).

I’m not old enough to remember Pride when it was dangerous and political. But I do remember it being earnest and meaningful. My first was in Montreal and consisted of a crowd of people holding a picnic in Lafontaine Park. Back then, the non-gay population regarded the whole thing as a curiosity to be avoided. Now it’s an event where seemingly half the population marches while the other half watches.

Don’t get me wrong. It’s a great party. There were some novel and genuinely exciting moments this past weekend. Justin Trudeau became the first sitting prime minister to attend; and once he was hosed down with super soakers, he was a fine and welcome sight for all. Then again, was it really so astonishing that our new PM would want to lead a parade?

Toronto Pride has reached such an apotheosis of corporate froth and self congratulatory feel-goodism I almost found myself seeking out the six grotty old men who used to provide a frisson of sexual danger by walking each other in the nude on leashes.

But back to what purportedly spoiled all this fun on Sunday. Mid-parade, a group of activists sat themselves down at a major intersection, bringing the whole thing to a screeching halt. Members of the activist group Black Lives Matter had been offered a featured spot in the proceedings, and they returned the favor by reminding the suit-and-tie crowd at Pride where the event’s roots really lie. They produced a list of nine demands and refused to yield to the unrelenting progress of Trudeau and the giant blue pill until the CEO of Pride signed on.

The demands included greater representation of blacks and transsexuals at the Pride organization and in the event itself, the return of a South Asian performance stage, and more translators for the deaf. CEO Mathieu Chantelois pronounced these terms so unremarkable that he would have agreed ahead of time if they had just sent him an e-mail.

The most controversial demand was that uniformed police officers be barred from attending future Pride events. Chantalois now claims he acquiesced to this one just to get the parade moving again and that he has no intention of honouring it.

Nor should he. It’s an outrageous demand. The origin of the first Pride in Toronto was a series of raids on gay bathhouses in 1981. In a time when few people would want to be publicly identified as gay, or a cross dresser or someone who sought anonymous sex in a darkened room, enough people came together to publicly say “Enough!” It was the beginning of a movement that would within a few short decades lead to same sex-marriage and an Ontario premier who is unpopular not for being a lesbian but for her policies.

Thirty five years later, the presence of gay and lesbian police officers walking shoulder to shoulder with straight colleagues, and led by no less than the Chief of Toronto Police in a rainbow lei, is testimony to a new era not only for gays but also policing.

Moreover, you just can’t exclude people from an event with the theme, “You can sit with us.” Pride has been so rigorously inclusive in past years it almost lost its funding for continuing to allow a small group of tedious critics of Israel to march.

Which brings me back to Black Lives Matter. Perhaps I can be accused of wanting it both ways. On one hand, I find their ’60s-style, Black Panther-inspired rhetoric and ideological absolutism inchoate and out of proportion to the severity of the complaints the city’s black population has against our police force.

On the other hand, the sit down was a reminder of a not too distant past when Pride was about social progress rather than offering up a juicy opportunity for targeted marketing. Just because your minority group has a VP Marketing at TD Bank doesn’t mean you can walk away from those minorities that may still live on the fringe.

New Brunswick’s Mystery Disease: Why Did the Province Shut Out Federal Experts?