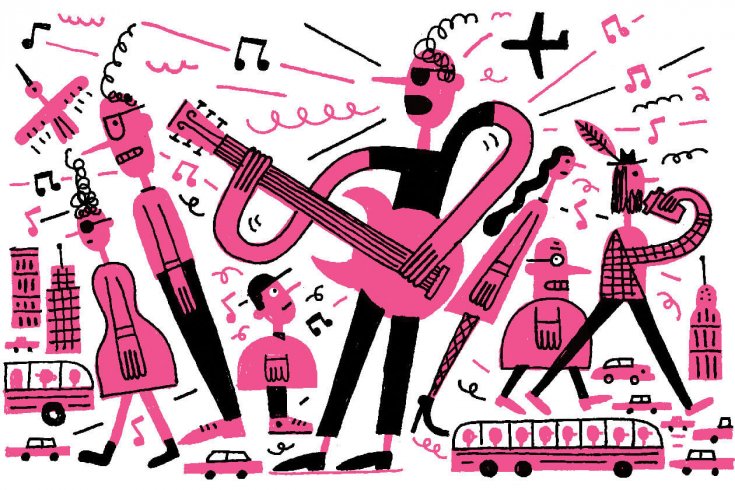 Dale Baglo was showering when the melody came to him. Tasked with writing a catchy tune extolling the convenience, comfort, and affordability of public transit in Victoria, BC, he pumped a sudsy fist to the rhythm. “I’ve got a limo that’s forty feet long,” went the lyrics, which he spoke into his pocket recorder soon after. “I’ve got a chauffeur that won’t steer me wrong. Commuting is better than it ever was. I’m taking it easy when I take . . . the . . . bus.”

It was 1991, at a time when Baglo was writing jingles and producing radio for Victoria’s Seacoast Sound. “We put through hundreds and hundreds of jingles a year,” he says. At its peak, the company, a subsidiary of the city’s CFAX news-talk radio, employed twelve writers and half a dozen salespeople. “Take the Bus,” with its banal subject and unremarkable, sudsy origin, was probably the least likely to become a cult juggernaut.

That glamorous jingle boom-time was a far cry from where the industry first started, with a 1926 Christmas Eve ditty about Wheaties breakfast cereal sung by a Minneapolis barbershop quartet. Released a few years later as a national campaign, the jingle “Have You Tried Wheaties,” saved the struggling brand, and the catchy, low-cost format transformed into a staple of radio advertising. In today’s advertising age, the radio jingle is perhaps the most contrived sales device of all.

“You can hear just a little bit of one of these jingles and the whole thing spills out into your imagination, whether you want it to or not,” says Elizabeth Hellmuth Margulis, director of the music cognition lab at the University of Arkansas and author of On Repeat: How Music Plays The Mind. “It’s an effective carrier for these messages, to sneak them in the back door.”

The process behind writing a jingle was, and still is, relatively straightforward. Composers and writers, typically a crew of musicians and other creative types, gather direction from a client—slogans, desired tone, goal of the ad (sales or awareness, for example)—and then hit the studio. For “Take the Bus,” Baglo spent a week layering keyboards with a flourish of reggae guitar. While Seacoast’s straight-laced client, BC Transit, wasn’t as smitten with the song as Baglo hoped, they okayed it with no changes.

Seacoast tapped Duncan Meiklejohn, a seasoned pro whose voice spans four octaves, to sing the tune. A professional musician—his former band mates founded the band Loverboy—he toured Canada before retiring from life on the road for a day job at Seacoast. “I was singing jingles for everybody: Sears, McDonald’s, Chrysler, Frito-Lay,” he says.

“Take the Bus” kept Meiklejohn busy. The song was resold throughout the ’90s to at least two dozen other North American transit authorities, including Red Deer, Medicine Hat, and Grande Prairie in Alberta, St. Catharines, Ontario, Cape Breton, Nova Scotia, Saint John, New Brunswick, plus Washington, Vermont, and New Hampshire. “Duncan was the poor sucker who had to sing every town’s name,” says Baglo. “No matter where they sold it, he had to go back to the studio.”

Baglo’s transit jingle has all the earmarks of obscure ubiquity that is unique to our increasingly post-analog age: millions have heard it, but few know how widely it has spread.

Andrew MacLean was eight years old in 1995, living in rural Annapolis Valley in Nova Scotia, when he would listen to Top 40 radio bouncing across the Bay of Fundy from the “big city” of Saint John. When “Take the Bus” came on, MacLean dreamed of a mythical place where Saint Johners commuted (Nay, were chauffeured!) in affordable, effortless style. “I could sing you the Saint John transit song like it’s ‘Twinkle, Twinkle, Little Star,’” he says, before breaking into the opening verse to prove it. MacLean bets there’s a entire generation of Nova Scotians who still know the jingle by heart, partially due to the song’s catchy melody, but also because it ran constantly, even late at night. “Driving with friends, we’d turn it up, grab our pens, pretend we had karaoke microphones, and belt that sucker out,” he says.

It’s that magical moment, that clear-as-a-bell memory evoked by a great musical hook that makes radio jingles like “Take the Bus” the most effective and enduring kind of broadcast advertising. Baglo insists the tune’s success is partly due to the reggae guitar, an addition suggested by a studio colleague. The powerful effect of a particular instrument, series of notes, or rhythm—in this case, a downtempo Bob Marley-style vibe—might sound crazy, but it doesn’t to Margulis. “What’s brilliant about using that kind of messaging is that it’s tacit. It’s not, ‘Hello, people under the age of thirty who like to chill out,’” she says. “It’s conveying that message in this very implicit way, through a feeling rather than something that’s being told.”

At this very moment, the jingle rings out from bedside tables and car radios in countless communities across North America. It may be omnipresent, but Baglo and Meiklejohn will never see another penny for it. Seacoast wasn’t unionized so the pair received an annual salary but no royalties. Now self-employed, Baglo produces music and concert videos, along with some radio advertising. Jingles comprise a small but humming side-business, which is typical of the industry these days; most new jingles are written by self-employed contractors or freelancers, with few, if any, large advertising or radio production companies focusing exclusively in the format.

Meiklejohn recently recorded two jingles—one for a furniture store and another for a sporting equipment chain—and his soulful baritone can still be heard on the airwaves belting “United Furniture Warehouse.” He and Baglo agree there’s a misconception among young advertising managers that the medium is passé. “They think of a jingle as something their parents would have done,” says Baglo. “I would argue that jingles that aren’t cool are just bad jingles.”

The important thing is that jingles work. “In some cases it’s not about that discrimination and savviness,” says Margulis. “Does the song get stuck in your head? Do you know the name of the furniture store?” Even if it’s annoying, if someone needs to buy a sofa, there’s a good chance they’ll find themselves in the store with the catchy jingle.

When MacLean is played a version of “Take the Bus” repurposed for the St. Catharines Transit Commission, the now thirty-year-old is aghast. “Betrayal. I had no idea,” he says, his shock hanging heavy in the silence. “It will only ever be the Saint John transit song to me.” A couple of years ago, MacLean moved to Fredericton, New Brunswick, about an hour’s drive from Saint John. When he visits the city for work, he’s more inclined to drive than take the bus.

Karen Pinchin (@karenpinchin) has written about food and economics for the National Geographic, Newsweek, and Maclean’s. She recently reported from a sea-urchin diving boat for the online magazine The Deep.
Benoit Tardif