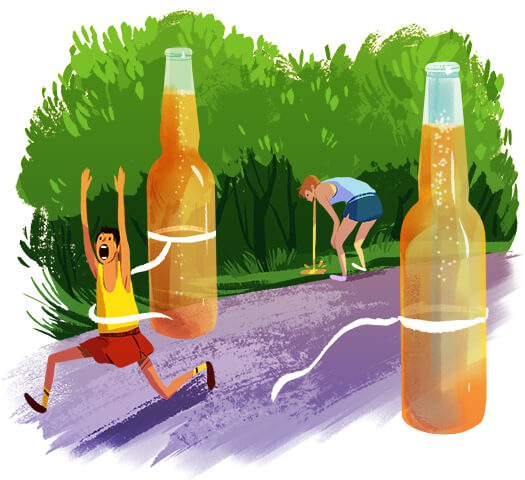 Ten runners in singlets and thigh-high shorts sprint around a tree-lined course carved out of a parking lot in Austin, Texas. Lewis Kent, a lanky twenty-one-year-old kinesiology student from Mississauga, Ontario, leads the pack, his fluorescent-yellow shoes glowing in the night. Two thousand fans cheer him on, some waving oversized cut-outs of his grinning face.

Kent dashes up to a table at the side of the course and slows to a walk. In one smooth motion, he grabs a bottle of Amsterdam Blonde with his left hand, twists off the cap with his gloved right hand, and pours the amber liquid down his throat.

Kent isn’t the fastest runner, but his chug is superhuman. He’s spent months refining it, and, at 5.15 seconds, it is world class. At the end of the “chug zone”—two beers down, two to go—Kent springs back into a run. “That was a helluva beer right there!” a commentator yells.

At the FloTrack Beer Mile World Championships, banners lining the course read, CHUG RUN REPEAT,” and Kent makes it look as effortless as it sounds. By the final stretch, the rest of the field has fallen back, and he and his world record-swapping rival, Corey Gallagher, a mailman from Manitoba, duke it out for boozy glory. Kent crosses the finish line first, his right hand raised in victory, in four minutes and forty-seven seconds, a new world record. Later, after throwing up, he’s awarded a trophy and a $5,000 (US) cheque.

The beer mile was born in the late 1980s, when runners at Queen’s University in Kingston, Ontario, decided to combine their love of racing and drinking. They competed on deserted tracks under cover of darkness. In the early ’90s, they wrote official rules: four laps of a 400-metre track (plus a nine-metre chug zone), four brews (355-millilitre cans or bottles, at least 5 percent alcohol), no shotgunning, a penalty lap if you puke mid-race. At track meets, the team passed their creation along, and it spread covertly to universities and colleges across North America. Then, in 2014, an American broke the five-minute mark. Within the community, it was a feat that had been thought impossible, akin to Roger Bannister breaking the four-minute mile in 1954.

Kent, a middle-of-the-pack track and cross-country runner at Western University in London, Ontario, was intrigued. He carted a six-pack to a dirt track near his house. It was hell: he was so out of breath by the third beer, it took him forty-five seconds to get it down. But he kept at it. For weeks, Kent guzzled six cans filled with water every day while clutching a stopwatch, and analyzed videos of his chugs. Countless test pours in his kitchen sink demonstrated how liquid flows faster from a bottle than a can. It was fluid dynamics 101. To train his stomach, he gorged on large pizzas, family-sized lasagnas, and nine-pound watermelons.

The nauseating training paid off. Last August, he broke the world record and then won the first Beer Mile World Classic, in San Francisco. Kent signed with an agent and accepted a sponsorship deal from the apparel company Brooks—clothes, shoes, and an undisclosed amount of cash—a first for the sport. Traditional runners were embittered, which Kent understands. “There are people who train ten years of their life to get a sponsorship deal and never get a free pair of shoes,” he says. “And then all of a sudden, this guy can drink beers and run, and doesn’t even run that quickly?” In December, he appeared on The Ellen DeGeneres Show. She sent him home with a one-year supply of his racing brew.

At university track meets, Kent would overhear older coaches trashing him. A former Canadian Olympian tweeted that when he was done being a “serious athlete” perhaps he’d dabble in the beer mile. One elite racer called it “a bastardization of the world’s most prehistoric sport.” But for people who find track races dull, adding four beers creates drama, says John Markell, who helped write the rules still in use today. “It’s kind of like watching a train wreck,” he says. “That’s the beauty of it. Anyone can puke at any time.”

On a rainy March day, Kent is training for the Beer Mile World Classic that will be held in London, England, this July—the first time an elite race will be run on a real track. Most runs are still quietly organized and held at night on tracks like this one, where Kent and Phil Parrot-Migas, his roommate and the world’s ninth-ranked beer miler, dodge puddles and practice with lighter 0.5 percent Molson Exel.

It’s not the booze that makes the beer mile challenging; the body can’t absorb enough alcohol in five or six minutes to get drunk. It’s the carbonation that turns the stomach. During one race, Parrot-Migas threw up mid-chug. “On the footage, you see Phil,” Kent says, tipping his head back while holding an imaginary bottle, “and the beer’s going down, then it goes back up, then it goes back down.”

They laugh, and then sprint off again, for one more lap and one more chug.

Rhiannon Russell (@rhrussell) is a freelance journalist based in Whitehorse, Yukon.
Irma Kniivila