The Ridiculous Saga of Montreal’s $3.5 Million Stumps | The Walrus
Skip to content 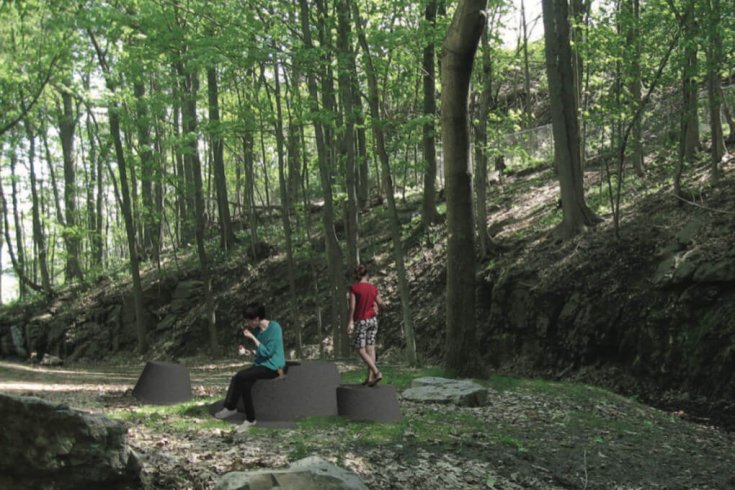 Montreal Mayor Denis Coderre wants to lavish his city with a costly birthday present: a luxury set of twenty-seven granite pieces, valued at $3.45 million. They are art, he assures us. And you can sit on them.

The installations are part of a much larger project called Escales découvertes (Discovery Stops), a legacy campaign to commemorate the city’s 375th anniversary in 2017. The pieces are described in a city report as “a cross between street furniture, signage, and design.” But everyone else is comparing the truncated, conical pieces of granite to tree stumps. Sites for the stumps include the famous Notre-Dames-des-Neiges Cemetery (because with all those gravestones, why not throw down some more granite?), St. Joseph’s Oratory, and other landmarks that fall within the Mount Royal Natural and Historic district, an area supposedly protected by the provincial government under the Cultural Property Act.

Many of the granite stumps will also be scattered across Mount Royal itself, the prized green jewel in the city’s crown. At the height of Montreal’s skyline, the mountain predates and transcends the buffoonery that defines the municipal politicking of the city that sits at the base of its slopes. Until now, that is, as legacy trumps conservation and overspending beats common sense.

To Mayor Coderre’s legacy project, Montrealers say, thanks, but you really shouldn’t have. We mean it. Please, don’t.

Montrealers know art. To be told by our mayor that we just don’t “get it” is patronizing.

For one, many citizens view the project as a colossal waste of money. Although bestowing a big rock for a milestone anniversary is customarily considered an appropriate gift, this one is just too posh for taxpayers—the contract already exceeds the original estimate that the city had obtained for the work by a whopping 27 percent. This is because the city is paying 43 percent above the market price for granite. City Hall has not produced a clear or satisfying explanation for the inflated cost of granite other than vaguely pointing to its own inadequate administration: in the end, there were few bidders (only two) because the entire plan is too complicated and too rushed. Aménagement Côté Jardin, Inc., the company to whom the contract was finally tendered, has not spoken to the media about the ludicrously steep prices of their suppliers.

Meanwhile, the mayor defends the hideous stumps as public art, dismissing his constituents’ derision as a matter of differences in taste. This is especially irritating given the culturally sophisticated character of a city that embraces interactive sculptures, like the 21 Balançoires(21 Swings), a whimsical set of musical swings that creates a soundscape/playground in our busy downtown, or the pivoting prisms of light that turned a wintry Places des Festivals into a giant kaleidoscope, or The Illuminated Crowd, a thought-provoking sculpture of hope and despair that looks like it’s carved from butter. Even our graffiti is tops. And with twenty-seven new blank granite canvasses around the mountain, the mayor is affording budding artists some late night practice, not to mention incurring more unnecessary spending on paint removal. The point is, Montrealers know art: we are steeped in the stuff. To be told by our mayor that we just don’t “get it” is patronizing. The public’s aesthetic judgment aside, there also exist criteria and juried art competitions run by specialists who might decide. But expertise doesn’t seem like a trait in which our mayor puts much stock.

Like the expertise of Frederick Law Olmsted, for instance, the famously visionary landscape architect who designed Mount Royal. He was pointedly against bringing clutter into the park. Les Amis de le Montagne, an advocacy and protection group, noted this in consultations with the city. While they were supportive of some of the plans for the 375th legacy project, including the overarching goals of linking Mount Royal’s three summits and creating greater accessibility to the mountain, they were skeptical of the design and installation project—especially the granite stumps. Not only did Les Amis de la Montagne suggest materials more local to the mountain, but they also expressed concern that the plan ran counter to Olmsted’s design principles. In an official statement, the group cites Dr. Charles E. Beveridge, a landscape historian, who wrote in his book, Mount Royal in the Works of Frederick Law Olmsted:

“At Mount Royal, as with his other urban parks, Olmsted wished to avoid a proliferation of structures. The purpose of making the mountain accessible to the public for recreation, he firmly believed, was not to provide demonstrations of the art of architecture.”

The Montreal Gazette has also reached out to Dr. Beveridge, specifically for his opinion on the granite stumps. It was not favourable. “They hardly have any appearance of being native to the place where they will be placed,” Beveridge is quoted as saying. “They have the appearance of having landed from another galaxy.”

Not only are the alien stumps incongruous with the landscape, but some of the granite pieces will feature maps of the mountain while others will provide historical information. Olmsted’s vision of the mountain was as a place of immersion, spontaneity, and discovery in a natural space, a retreat from concrete, structure, and order. This includes an escape from the stories our government tells us. Besides, there is already a space (Smith House) that serves to educate the public about Mount Royal’s history and ecology, making this element of the project redundant.

Montreal’s own heritage advisory board offered feedback on the project that suggested they were “skeptical” and that the granite pieces were “problematic.” Projet Montréal, the opposition party that embraces sustainable urban planning and practices (their councillors voted against the project, as did all of Montreal’s suburbs), has revealed that this report was not included for consideration when a majority vote for the contract happened in May.

Since Mount Royal and its surroundings fall under the provincial Cultural Property Act as a natural heritage site, the Ministry of Culture still has to officially approve the plan. Hopefully they will respect Olmsted’s legacy over Mayor Coderre’s. But considering the same Ministry recently approved a project to resurface a natural park at the foot of the mountain with a synthetic playing surface, we shouldn’t raise our hopes too high.