I clicked on YouTube’s play button and waited for the stylish, sassy, sometimes scary clique of upwardly mobile Nigerian women known as the BlackBerry Babes to load on my laptop. And then I waited. And waited. At the time, I was working for an NGO in Abuja, Nigeria’s capital, where Internet connections rival Canadian dial-up speeds circa 1995.

Finally, the popular Nollywood film series appeared on the screen. Produced in 2011 and 2012, the six low-budget BlackBerry Babes instalments chronicle the absurd social aspirations of four middle-class Nigerian women—a kind of Sex and the City Goes to West Africa. Instead of shoes, though, the women covet Canada’s fashionable hand-helds. In one memorable scene, the incredulous Keisha breaks up with her cash-strapped boyfriend because he won’t buy her the gadget she wants: “Without you buying me the BlackBerry phone, there is no basis for this relationship right now.”

The storylines can seem far-fetched to a Canadian in 2013, but the cultural phenomenon they parody is real enough. While North American business stories have been reporting on RIM’s spectacular decline, Africa has fallen hard for the Waterloo, Ontario, tech giant. RIM, now known simply as BlackBerry, is Africa’s number one smart phone vendor, and it is now the preferred brand in both South Africa and Nigeria, two cultural leaders for the continent. Second only to Asia’s mobile market, Africans already use 735 million cellphones.

The case of the missing thumbs 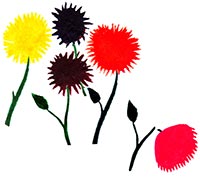 Opposable thumbs were invaluable to humans long before we relied on them for cellphone communications: the evolutionary advantage they provide is part of what differentiates us from animals. So when the film adaptation of Cormac McCarthy’s The Road came out in 2009, much was made of the fact that some characters were missing these essential appendages. The thief (Michael K. Williams) has stumps for thumbs, while the book describes him as missing the fingers on his right hand (a punishment, the author implies, inflicted on tribal outcasts). More mysterious is the story’s ending: a kind stranger adopts the newly orphaned protagonist, but in the screen version the stranger (Guy Pearce) is also missing a thumb—a detail McCarthy never mentioned. Theories proliferated on blogs; perhaps this “happy ending” had a more sinister meaning? Director John Hillcoat never fully explained this deviation from the book, but the lost digit bears witness to the inhumanity of McCarthy’s post-apocalyptic vision.

In Nigeria, though, where BlackBerry claims its hand-helds account for half of all smart phones, cachet has less to do with the handsets themselves and more to do with the nation’s flimsy infrastructure. In a country where some 85 percent of the population lives on less than $2 (US) a day, reliable electricity is rare and multiple call drops are common—three or four, for example, in a brief chat with my boyfriend, asking him to pick up bread on his way home; a dozen more in longer calls home to my parents in Toronto, who worried every time my digitally lagging voice disappeared again. Connections are so bad that four of the country’s wireless carriers were fined last May for failing to provide minimum service. They in turn blamed unreliable electricity and “sabotage.”

To solve the problem, many Nigerians buy multiple phones or SIM cards and tie each to a different wireless carrier so they can use whichever one happens to work at any given time or location. Even the humble office assistant at my NGO regularly stuffed his pockets with several handsets; thus a nation of 170 million has 100 million mobile subscriptions. Such conspicuous consumption can be jarring in a country where over half of the population lives in poverty, but the middle class can easily afford such services: thirty days of non-contract BlackBerry service costs about $10, a small fraction of the average middle-class salary, which hovers somewhere between $550 and $850 per month.

Because computers are prohibitively expensive for many, the hand-held “constitutes the primary method of Internet access,” observes Seyi Taylor, founder of Bloovue, a mobile and online advertising company based in Lagos. The implications are far reaching. “A lot of social media usage in Nigeria is driven by BlackBerrys, and much of what happens on social media is political expression,” he says. “Occupy Nigeria may owe as much to BlackBerrys as to Facebook and Twitter.”

BlackBerry’s hand-helds are especially desirable because of the BBM instant messenger system, used by 95 percent of Nigerian owners. It helps, too, that only a legitimate product will function on the network. If you don’t have a BB PIN, you might find yourself in a BlackBerry Babes kind of scenario: real-life love interests have been known to pass over suitors who don’t have one. The important thing is to connect first, and then find out if you have personal chemistry via chats on the exclusive service.

“It’s not just about the device anymore. It’s about the entire ecosystem,” says Waldi Wepener, BlackBerry regional director for West, Central, and East Africa, outlining the many applications the company is developing for its users. He estimates that smart phone penetration in Nigeria is only about 7 or 8 percent, versus more than 48 percent in Canada. “We certainly expect to keep pace with the growth in the market,” he says. His estimate, though, may be unrealistically low: a Samsung executive puts Nigeria’s smart phone penetration at closer to 15 percent.

Last September, RIM opened an official store in Lagos, the business capital, and recruited youth brand ambassadors to help create buzz during the lead-up to the BlackBerry 10 launch. But BlackBerry’s chief attraction, almost unlimited cheap Internet access, will soon have to contend with increasingly competitive data plans for other, cheaper smart phones, such as the $50 (US) Huawei, made in China.

BBM’s exclusivity might not be enough to protect BlackBerry from the same status symbols that have eroded its market share in Europe and North America. Seyi Taylor used to be part of a BBM group with more than a dozen friends, but this year the group switched to WhatsApp, which works with most smart phones. “Eight of us have iPhones now. Two of us have Android devices,” he says. After playing with a beta version of the new BB10, he allowed that it was “sleek and all.” But he wondered if it would be any less prone to crashing than its predecessors: “I haven’t switched on my BB in months.”