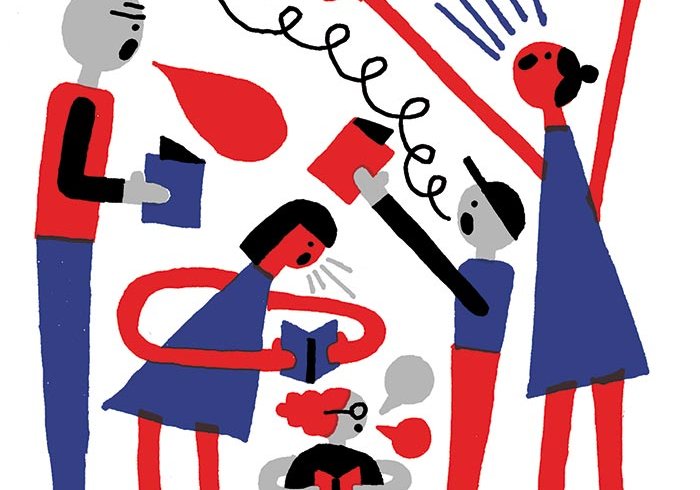 In the nightmare version of my life, I stand on a bare stage singing that Sarah McLachlan song from the save-the-animals commercial. It is a nightmare not because of Sarah, but because I have what science calls amusia, or what everyone else calls a tin ear. I cannot sing. I mention this to Georgette Fry, a jazz singer from Kingston, Ontario, who runs an amateur choir program called Shout Sister! She tells me it’s a myth, that most people can sing but have been told unkindly (or worse, kindly) by teachers or friends that they can’t. At Shout Sister!, no one reads music. Rehearsal is led by a trained musician whose job is to help the group without getting caught up in didactic formal details, quarter notes and so on. They don’t sing the churchy choral standards but rather pop songs, Motown, country oddities. “I decided my choir needed to be big enough that members would feel safe in opening up,” she says, “because nobody learns anything from holding back, except how to hold back.”

Shout Sister! is not one choir but rather sixteen across southern Ontario, a kind of cottage industry for amateur singers. In Ottawa, where I live, there are two chapters, and—according to the website for the Leading Note, a music shop on Elgin Street—seventy-two other choirs in the city: the Musica Viva Singers, Just Voices, the Stairwell Carollers, the GlBT choir Tone Cluster (begun in 1994 as a “gay madrigal group”), plus the church outfits. In Toronto, Choir! Choir! Choir! sings arrangements of ’80s pop songs in a College Street pub where anyone can drop in for $5, to cover the cost of lyric sheets. Halifax has the You Gotta Sing! choir: all ages, men and women, no auditions. If you have a venue and a name with an exclamation point, you can find people who want to sing together, not because they’re particularly good at it (although they might be), but because it’s fun.

In the US, 32.5 million adults belong to choirs, according to Chorus America, an “advocacy, research, and leadership development organization that advances the choral field,” which makes it, on paper, a more robust lobby group than the National Rifle Association, with some 4 million members. Of course, amateur singing is not new; 150 years ago, middle-class families sang and played four-hand piano arrangements for entertainment, as well as to create an acceptable context for courtship. The piano was, “in sociological terms, the TV room of the 19th century,” writes French musicologist Gilles Cantagrel, in the journal La Scena Musicale. But then came the player piano, arguably the progenitor of the iPod, and homemade music ceded to professional, mechanical reproduction. Now it looks as if the pendulum is swinging the other way. Amateur music making is back.

Some things are best left to professionals: orthopaedic surgery, say, or art restoration (judging from the amateur touch-up of the Jesus fresco in Borja, Spain, last year, which looks like Darwin the IKEA monkey). But we’re now seeing more cultural corners where amateurs or groups of amateurs are pressing the question, why can’t I do this myself? It’s called maker culture. On a humble scale, this might be what is happening at Shout Sister!

So I go to the Tuesday night rehearsal at the Anglo-Catholic St. Barnabas in Ottawa—not to sing, God forbid (and it’s Shout Sister!, meaning an all-woman choir, and I am not a sister) but to watch. I meet Jody Benjamin, the choir leader, whom I remember from the Ottawa country-jazz band Toasted Westerns. She still plays clubs and festivals with a group called Ball and Chain, and from this circuit she got to know Fry. The idea with Shout Sister!, she says, is that the women learn the music on their own, by ear, downloading songs from the club’s website, practising at home or in the car or in the shower, and then showing up ready. They figure out a vocal range that suits them: low, middle, or high (there’s no talk of alto, mezzo, or soprano). The point of Tuesday night is just to sing.

Fifty or so women place their coats and water bottles on chairs and on the table set up for the Wednesday meeting of Alcoholics Anonymous. The walls are covered in crayon drawings of Jesus. The group starts with a warm-up. Benjamin stands on a wooden box. Warm-up is neck rolls and hip circles and a lip stretch, which means gripping your top lip between thumb and forefinger and pulling. In a nod to participatory journalism, I pull my own lip. My gum sticks to my thumb. I am less a maker and more of a watcher.

Shoes come off, and everyone sticks out their tongue and makes bug eyes and goes “aaah.” Then they sing “Almost Home,” the Mary Chapin Carpenter song, and they sing it pretty well. I scope the crowd with an eye to sociology: who are the wallflowers just mouthing it, and who are the hot dogs? No, they just sing, and the group levels out the weaker and stronger voices. It’s a full sound. If I were to assign it a colour, I would say red, like the Spanish wine they call bull’s blood: not delightful, but nice and meaty and kind of nourishing. And then they keep singing. They sing Gordon Lightfoot, and Jimmy Cliff’s “Sitting in Limbo.” They sing Sarah McLachlan, but not the one from the save-the-animals commercial. Benjamin leads with semaphore and soft direction. Of the Staple Singers medley, she says, “Still sounding a bit tentative in the middle there.” They follow instrumental tracks from a portable sound system: banjo, beats, honky-tonk piano. It’s like group karaoke, but without karaoke’s effort to simulate. They are not trying to mimic pop songs or the Staple Singers: they are making something peculiar and different. They are hacking pop music.

Creative hacking is part of maker culture. A hackerspace, also called a makerspace, is where like-minded (or not) innovators, artists, and amateur tinkerers gather to share ideas and collaborate on projects. Many are high-tech or bizarre-tech, producing a robot that gives hugs, 3-D printers, a flame-powered pipe organ. Some are patently low-tech, for instance advising how to brew beer with a coffee maker and cereal flakes.

Maker philosophy relies on crowd sourcing, and community knowledge that is free and available. The point is to do it yourself: create, don’t just consume. It’s an amalgam of pre-industrial nostalgia (you can be a blacksmith!), neo-hipsterism (you can be a blacksmith who listens to Bon Iver!), and modern communications technology (you can be a blacksmith with a blog!). The goal is to take a measure of creative production away from industry, and professionals, and put it back in the hands of amateurs. We have enough cheap consumer junk. We don’t have enough hugging robots. In 2012, the DIY version of a trade show called Maker Faire (with a deliberately medieval, winky extra e), in San Mateo, California, drew 110,000 participants. Cory Doctorow, the Canadian sci-fi writer, is a spiritual godfather of the movement. His recent novel, titled (wait for it) Makers, is “a book about people who hack hardware, business-models, and living arrangements to discover ways of staying alive and happy even when the economy is falling down the toilet.” It imagines an economy based on monetizing the small and idiosyncratic, rather than the mega-global whozit that for most of us defies both participation and payoff.

If maker culture is growing, along with backyard blacksmiths it belongs to citizen journalists, YouTubers, writers of fan fiction, and the craftspeople who sell their knitwear on Etsy, as well as amateur choirs like Shout Sister! I asked Doctorow by email if amateur choirs fit his own definition of makers. “Not knowing much about choirs,” he said, “I do think that definitional questions about subcultures are always corrosive. Trying to decide who is a ‘real’ punk, a ‘real’ artist, or a ‘real’ maker is generally about trying to decide who isn’t. So I’m inclined to say you’re a maker if you say you are.” At Shout Sister!, the music is hacked like computer code, laid open for reworking in a new environment, not to destroy it but to adapt it. Strong singers help weak singers. Something new is made by hand, or larynx, or heart, or wherever it is that music comes from.

In the end, what the makers make may be less important than the community they create: active, happily quixotic, a triumph of the amateur over the mandarin. On a break at St. Barnabas, Debbie Rubin, shoeless and cheerful and moderately thirsty, talks to me about the choir’s appeal. She has been in other choirs, “but you never get a chance to sing,” she says. “They’re always trying to teach you. Here, you just listen to the person next to you, and you’re always singing.” It is as if through some alchemy the group teaches itself. One of the women in the Tuesday Shout Sister! struggles with dementia. On the break, she sits alone, wearing purple Mardi Gras beads around her neck, and some of the women come to chat with her, but it’s clear that she is hard to reach. When they get back to singing, she stands in front with a lyric book and belts it out. As Fry says, no one learns anything by holding back except how to hold back, and that’s true for anyone with the impulse to make something fresh.

Tom Jokinen is a writer based in Winnipeg. He frequently contributes to the Globe and Mail and CBC Radio.
Benoit Tardif