In 1977, at the dawn of email, three computer scientists debuted “Alice” and “Bob” in a paper that proposed a method of securing data across public channels, from point A to point B. Since then, various scenarios involving Alice and Bob (along with a growing list of supporting characters) have been used to animate incremental advancements in encryption technology, including its quantum leap, which promises absolute privacy. With a team of physicists from the Institute for Quantum Computing and the Perimeter Institute in Waterloo, Ontario, now in a race to orbit a satellite that would extend the range of communication, The Walrus catches the enduring couple in some of their more intimate moments.

Alice and Bob order a pizza, half Hawaiian and, at Bob’s reluctant request, half vegetarian. He is trying to be healthy, though not so healthy as to fix himself a salad. When the pizza arrives, Bob chews sullenly on his slice while ogling the ham on Alice’s. How might Alice code a message to Bob that she loves him just the way he is, spare tire and all, without disclosing that when he takes off his shirt she finds herself transfixed by a human body that has somehow gotten lost inside itself?

On Tuesday nights, Bob plays basketball with Chuck and some other old friends. Alice’s beloved big brother, Oscar, is visiting from out of town, and at her insistence Bob takes him along. Oscar wears shorts so snug and brief that, in Chuck’s words, “You can pretty near tell his religion.” Also, despite only having the most basic understanding of the game, Oscar proves to be disconcertingly—and dangerously—competitive. After Oscar takes out Chuck’s knees on a layup attempt, Chuck pulls Bob aside: “Tell your boy to cool it.” Meanwhile, Oscar has removed his shirt and tied it around his head, Rambo-style. How might Bob code a message to Chuck that he knows his brother-in-law is an asshole without alienating Oscar and consequently being banished by Alice to sleep on the couch? 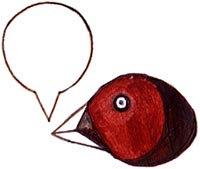 “I’m a personality prototype,” deadpans Alan Rickman’s paranoid android in the 2005 film The Hitchhiker’s Guide to the Galaxy. “You can tell, can’t you? ” Marvin’s excessive sarcasm shows off his advanced AI capabilities: like hyperbole and irony, sarcasm is a form of indirect communication, long considered a distinctly human capacity. Interpreting indirect communication requires pragmatic reasoning that juggles context, intention, tone, inference, social conventions, and literal meaning. As well, such mental gymnastics boost electrical activity in the brain. In a May 2012 issue of Science, Noah Goodman and Michael Frank published a mathematical model that predicts how humans reason pragmatically. This quantitative theory could be used to reconstruct our ability to process indirect communication, and might one day enable computers to use language as acrobatically as we do. Because a more sardonic Siri is just what users want.

For Bob’s fortieth birthday, Alice has planned a big surprise party. It is important that it go off without a hitch, as she has been feeling a little distant from Bob since his night on the couch. That evening, when Bob comes to pick up Alice at work, her try-hard manager, Trudy, intercepts him: “Looking forward to your b’day shindig. High-five!” How might Bob code a message of shock a few hours later, when Trudy flicks on the light and his friends shout, “Surprise!”? And how might Alice, when she decodes Bob’s obviously fake “Hell’s bells, I had no idea!” and learns of Trudy’s blunder, code a message to Trudy that doesn’t compromise her job or the festivities?

Alice and Bob have a neighbour, Eve, who drives a Prius and likes to drink homemade kombucha on her porch, surveying the neighbourhood. A week after Alice ruined Bob’s fortieth by calling her boss a “train wreck,” they are unloading groceries from their minivan when Eve remarks, “Did you forget your own bags? ” Bob gives Alice a look like This shit again? How might Alice code a message to Eve that doesn’t explicitly blame Bob, who is skeptical that ceasing to use plastic bags will slow the planet’s inevitable tumble into environmental ruin, while acknowledging that, yes, we should all do our part—just sometimes we’re a little tired and forget, okay?

One rainy Sunday, Alice is at her Pilates class, and Bob streams pirated episodes of Game of Thrones on the Internet. A pop-up window appears featuring a woman in a bikini and stilettos, who promises a “live chat with a real goddess.” Theologically curious, Bob clicks on the link. A dialogue box with the name “Mallory” appears. “What are you doing? ” asks Mallory. Bob looks outside: meddlesome Eve is nowhere to be seen. “Not much,” he types. “What do you want to do? ” asks Mallory. While Bob unbuckles his belt and considers his options, malicious spyware uploads his credit card information to a server in Bucharest. How might Bob code an explanation to Alice of this little disaster?

Since Alice’s former roommate Charlie got divorced, he has been asking her out for a beer. In light of recent events, she finally relents. Charlie has been hitting the gym; Alice must resist the urge to squeeze his new biceps. Between their second and third pitchers, she briefly considers what he might be like in bed. Later, at home, this thought haunts her, and she lies there stiffly, remorseful and drunk, when Bob kisses her good night. At 4 a.m., she wakes from a dream of such lurid sexuality (masks, margarine, an abandoned Ikea) that for a moment she forgets not only where she is, but who she is. Over the following two hours, Alice watches the light pale into morning. What might she do—or, more likely, buy—for Bob that will code her commitment to their marriage without suggesting that it absolves her of guilt? Also, what do you think of Alice casually putting a chin-up bar in Bob’s walk-in closet?

Bob and Alice decide to try couples’ therapy. In his strip mall office, Dr. Trent seats them together on a couch between a miniature Zen garden and a wave machine. While Alice gamely tries to engage with Dr. Trent’s visualization exercises, Bob uses the tiny garden rake to comb rocks and sand into a portrait of the doctor: goatee, overbite, furrowed brow. During one of her “I statements,” Alice notices Bob’s doodle and snorts. Bob adds a speech bubble: But how does that make you feel? Unable to contain herself, Alice doubles over in laughter. Dr. Trent, confused, suggests some deep breathing exercises. Bob sighs, again and again. Alice laughs so hard she farts. Is it necessary at this point to code the fart as a squeak of the chair? Or should Bob and Alice just cut their losses, flee to the Jack Astor’s around the corner, and hoist a few margaritas in honour of true, honest, open communication?