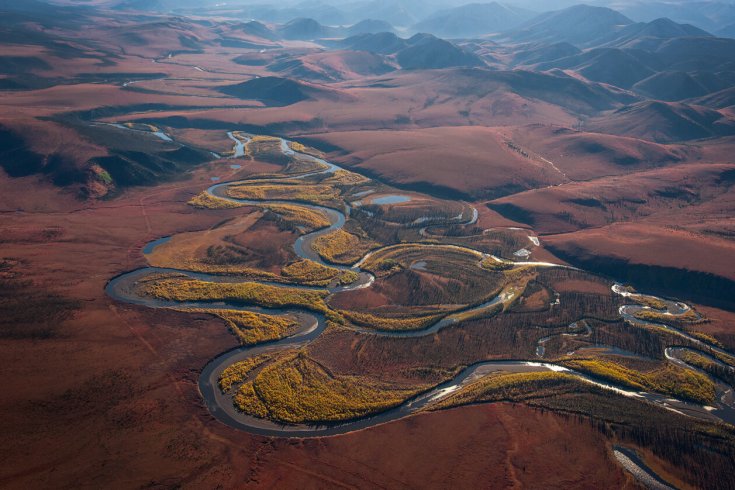 For two weeks, they slept alongside rivers, pitching their tents under a sky that never went dark. They picked blueberries the size of grapes. They caught grayling and seasoned it with sriracha. They showered under a waterfall and drank from the river. They looked for things their Indigenous elders had told them about: winding foot trails; a riverbank grave, marked by a wooden cross; tree stumps chopped by the stone axes of their ancestors.

For most of the eight paddlers, who ranged in age from sixteen to thirty-one, this was the first time they’d laid eyes on the Peel River watershed. The group, called Youth of the Peel, came from three of the four First Nations whose traditional territory falls within the 68,000-square-kilometre region in the Yukon’s northeast. The watershed has been important to these First Nations for millennia, dating back to when their nomadic movements across the region followed the cycle of the seasons. Today, just one all-season road, the gravel Dempster Highway, passes through the Peel, in its western corner. The rest of the watershed can be accessed by boat, dog sled, snowmobile, or float plane. It’s home to thriving populations of caribou, grizzly bears, wolves, peregrine falcons, and moose. There are no permanent human residents. The size of New Brunswick, it is the Yukon’s Yukon—the wildest part of an already wild place.

There are conflicting visions for the watershed. Many Yukoners, including the affected First Nations, want it to remain an intact ecosystem. But the Yukon government and the mining community have expressed their eagerness to dig for minerals. Over 8,000 quartz claims have already been staked. The debate has divided the territory, and protests have been going on for years.

On March 22, the Supreme Court of Canada will hear a case that will help decide the future of the Peel’s pristine landscape. “You live in suburbia but consider yourself Canadian because of these vast, unspoiled wildernesses,” says Lewis Rifkind, the Yukon Conservation Society’s mining analyst. “The idea that they exist becomes very important.”

Current tensions over the Peel can largely be traced back to 2014, when the Yukon government ignored recommendations that emerged from a seven-year consultation process. While an independent commission had proposed protecting 80 percent of the area, the government put forward a very different plan: to open 71 percent of it to industrial development. Two First Nations—the Tr’ondëk Hwëch’in and Na-Cho Nyak Dun—sued. They were joined in the lawsuit by the Yukon Conservation Society and the Canadian Parks and Wilderness Society’s Yukon chapter—making this possibly one of the first cases in Canada to feature First Nations and environmental groups as co-litigants.

The coalition argued that the government disregarded the process outlined in the Umbrella Final Agreement, a 1993 document that established a framework for the Yukon’s fourteen First Nations to cede their Aboriginal title in exchange for, among other rights, a say in land-use projects. The Yukon Supreme Court agreed with the claimants. The government appealed, and in 2015, the courts ordered the process back to an earlier stage, essentially giving the government a second chance. The pro-Peel side, fearing that the do-over would allow the territory to impose its original plan, appealed to the Supreme Court of Canada.

The Supreme Court decision will set a precedent for land-use planning in the Yukon and could have implications for how modern treaties are interpreted elsewhere in the country. The case also comes at a delicate time for Yukon mining companies. Exploration spending in the territory dropped from $330 million in 2011 to an estimated $92 million in 2015, and low global mineral prices continue to take their toll. Two mines have closed since 2013, and lengthy legal battles are a turnoff for investors debating whether to underwrite the infrastructure required to mine the Peel—a region that is mountainous, boggy, and frozen for at least half the year.

It’s not as if the land won’t be commercially useful, though. A by-product of the Peel’s continued existence is that two established industries—big-game hunting and wilderness tourism—will keep operating; roughly 300 people paddle the Peel’s rivers every summer. This traffic isn’t anywhere near as disruptive to water and wildlife habitat as mining would be.

Jimmy Johnny may know the Peel better than anyone else alive today. He started wrangling horses in the watershed in 1958, when he was thirteen. Then he spent fifty years working as a big-game guide before his retirement in 2010. The Na-Cho Nyak Dun elder can tell you where moose bathe in a hot spring, and where to find water so cold it’ll make your teeth feel frozen. Johnny has been a constant presence at court hearings and protests. Mine the Peel for profit, he argues, and you’ll never be able to return the landscape to what it was. “There’s no money in this world that will ever replace what you’ve destroyed.”

While the movement to conserve the Peel has taken shape in Whitehorse, where the legislature, courthouse, and most of the Yukon’s population are located, it’s most visible 1,000 kilometres north. Fort McPherson, in the Northwest Territories, is home to about 800 people, most of them Tetlit Gwich’in. There, “Protect the Peel” bumper stickers have been slapped on to kitchen cupboards, fridges, boat motors, and front doors.

“To people in the communities,” says Rifkind, referring to the villages and towns outside Whitehorse, “the Peel is more than an environmental issue. It’s a cultural issue, a way-of-life issue.” Whatever happens upriver in the Peel will affect the people of Fort McPherson directly. The Tetlit Gwich’in fear that the infrastructure that springs up around such development will lead to habitat loss for the caribou, moose, and fish they rely on. Another fear is industrial contamination. It’s not an outlandish concern, given that a mine in Faro that closed in 1998 still contains 70 million tonnes of tailings and 320 million tonnes of waste rock—despite the fact the federal government has spent millions annually on cleanup.

When I ask Bobbi Rose Koe, who is Tetlit Gwich’in, what her people would lose if the Peel were to be developed, I see tears in her eyes. “Our identity,” she says. “Our stories.” Now twenty-seven, Koe grew up in Fort McPherson, where she learned to hunt, fish, and trap. Her great-grandparents were buried along one of the watershed’s rivers. A co-organizer of Youth of the Peel, Koe is part of the new generation of activists taking up this cause. “We need this place,” she says, “because our youth have to understand where they come from.”

This article originally appeared in the April 2017 issue under the headline “Industrialist vs. Indigenous.”