Writing Lessons from Ewoks | The Walrus
Skip to content 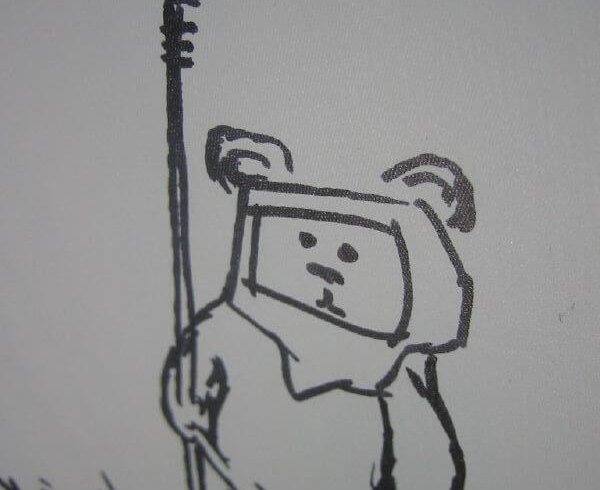 This is a story about what it takes to be a good writer. And like so many of my stories, it begins with me harassing a random stranger.

On a sunny Saturday afternoon in downtown Toronto, I was dressed in a luminescent white tennis tracksuit, walking back from the St. Lawrence farmer’s market, carrying one full, uncooked, pastorally raised, organic chicken under each arm. From around the corner of a building, there emerged a man holding a small furry dog, slightly larger than a cat. As he approached, I heard a delighted squeal just behind me. It was an elderly woman out doing her shopping. “Your dog is adorable!” she said to the man. “It looks just like an Ewok!”

Like a lot of people who grew up on Star Wars (I’m forty-seven), I have strong feelings about the creatures populating George Lucas’s universe. That includes the tiny mammaloid bipeds who help the good guys destroy the Death Star. Ewoks are cute—but controversial. Many hardcore Star Wars fans denounce them as marketing props, inserted into the movies for no other reason than to attract young children and sell plush merchandise. “An Ewok? ” I said to the woman. “You realize you’re talking about the furballs who basically ruined Return of the Jedi, right? ”

The tone of my question was slightly angrier than I’d intended. In fact, I’m not quite sure why I felt the need to say anything at all. Apparently, I have a lot of unresolved feelings about Ewoks.

The woman responded at once. She was proud, but not angry. “I happen to know something about this subject,” she said, looking me in the eye. “On the Ewoks TV cartoons, I was the actor who voiced Aunt Bozzie.”

It took me a moment to register that message. Back in the mid-1980s, ABC ran a show called Star Wars: Ewoks (later rolled into The Ewoks and Droids Adventure Hour). Bozzie was a minor character. But even so, if what the woman said was true, she was the greatest authority on Ewoks I’d ever met. Or, indeed, that I ever would meet. By the time I’d recovered my composure, she was gone, headed east along Front Street. After a few seconds spent staring at her back, I walked in the other direction, toward my car. And then, as it usually does in these situations, my writerly instinct kicked in. I stopped, turned around, and broke into the fastest trot possible by a middle-aged man holding two chickens. “Wait!” I called out. “We need to talk!”

As I learned, the woman’s name is Pam Hyatt. And Ewoks is just one of the many film and TV credits she’s accumulated over fifty-seven years in the business. During an Indian-food lunch on King Street East, she took me through a career that began in the late 1950s and has continued, virtually without interruption, till today. At age seventy-nine, Hyatt continues to perform one-woman theatrical performances, sing cabaret, and perform voice-over work for TV commercials. She’s also an absolute hoot, with an endless list of great stories, and a who’s-who knowledge of the Canadian stage extending back to the dawn of the television era. For any journalist who writes about arts and letters, this woman is a gold mine. My chicken masala got cold as I struggled to take notes.

Why am I telling you all this? Because if you want to be a writer, you can’t do it alone. You need the help of interesting people who can provide tales, tips, insights, ideas, inspiration. (This is true even of fiction writers, whose characters typically can be traced, in some form, to the real humans who populate their memories.) You need Aunt Bozzies, in other words. Lots and lots of Aunt Bozzies.

These people come in all shapes, sizes, and temperaments. Some are deeply admirable, and some are loathsome. One of the best columns I ever wrote came to me after a lengthy wee-hours conversation with a Holocaust denier in a hospital emergency room. A massive newspaper feature I wrote about life in James Bay First Nations reserves never would have found a wide audience if I hadn’t stumbled upon a ninety-two-year-old former band chief who told me his astounding stories about surviving life in the bush. And a lengthy Walrus cover article I wrote about Uber a few months ago would not exist if I hadn’t spent twenty minutes listening to a Syrian-Canadian cab driver eloquently describe how all the sacrifices he’d made in life were being undone by unregulated competitors.

We often idealize the act of writing in its purely mechanical aspect: a man or woman sitting in front of a keyboard, waiting for a flash of magic to strike the brain and flow out through the fingers. But more often, the writer’s art emerges slowly—from a lifetime of decisions about how we interact with those around us.

Book reviews, such as the ones you’ll find in this volume of Foment, reflect writers’ engagement with ideas and stories, a starting point for many a budding writer. At literary festivals, like the Ottawa International Writers Festival, writers can go a step further, and interact with other writers and bibliophiles—a good chance to learn tradecraft, and take inspiration, from others in the field. What you’ll find as you get older, though, is that when you approach life with an open, inquisitive mind, all the world can become your literary festival. If you aspire to become a writer, the words on your lips always should be “Tell me more.”

Ewoks are a useful breed. If one crosses your path, make sure the furry thing doesn’t escape.